Panorama of Rio de Janeiro in 1820/. The royal palace, boa vista, is in the approximate centre, and the Gloria hill is just out of view on the right. Painting by Nicalas Antoine Taunay.

When the de Freycinets arrived in Rio de Janeiro, they found there a flourishing French expatriate community, and through the good offices of one of its members, the Comte de Gestas, they were able to move into a fine house on the Gloria hill, with amazing views overlooking the harbour. Sadly, Rose’s delight with this arrangement was short-lived; within a few days a prospective tenant had appeared and, not wishing to damage the interests of the lady who had lent them the house, they prepared to move out. Fortunately, there was another member of the French community on hand to help, and they were able to move straight into another house, not quite so palatial and, being at the foot of the Gloria hill rather than close to its summit, without the views. It was, nonetheless, a pleasant place to be, and for that they were indebted to a “M. Taunay, the son of a painter and a member of the Institute’s Academy of Fine Arts, whose name and works are well known in Europe”. But who was this friend in need? 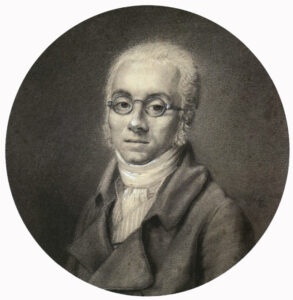 There is more than one candidate, although there is one very obvious one, and that is Nicolas-Antoine Taunay (1755 – 1830), who was indeed the son of a painter, but it could conceivably have been one of his sons, because he was himself a painter, or his brother, the sculptor, Auguste-Marie Taunay (1768 – 1824). But what were all these Taunays doing in Rio, and how long had they been there?

The origin of this little colony goes back to 1807, when it seemed likely that the whole of Portugal would be occupied by the Napoleonic armies, and the entire Portuguese court retreated to Rio, where they remained until 1820. The city thus became de facto the capital of the Portuguese Empire. The royal power at the time was in the hands of the Prince Regent, who did not formally succeed to the throne as João VI until 1818 and until that happened the legal monarch was his mother Maria, who was mad. There was another generation also present. Reaching Rio when she did, Rose only just missed the celebrations surrounding the arrival of the Austrian archduchess Maria Leopoldina, who was born Caroline Josepha Leopoldine Franziska Ferdinanda of Habsburg-Lorraine and who had been married by proxy to João’s son, the heir-presumptive, Pedro, in May 1817.

After Napoleon’s defeat, the Portuguese court was in no hurry to return to Lisbon (indeed, Pedro never left, preferring to remain behind and declare himself Emperor of Brazil) but they did want to make their capital a little more cultured, and to do that they turned to their old enemy, France.In 1816 a French Artistic Mission had arrived at João’s invitation, under the leadership of Joachim Lebreton, not himself an artist (he had been a professor of rhetoric), but a skilled administrator. In addition to the brothers Taunay and Antoine’s eldest son Félix, who was classed as an apprentice, the group included a second painter, an architect, an engraver, an engineer, a blacksmith, a locksmith and several carpenters. They were, understandably, resented by the Portuguese painters, architects, sculptors, craftsmen and carpenters who were already there. Statements such as that by the painter Debret, to the effect that :

“Inspired by the zeal and enthusiasm of those enlightened travelers who are no longer nowadays afraid to face the hazards of long and still, very often, dangerous journeys, we left France, our common homeland, to go and study an unknown nature and imprint, we hoped, on this new world, the profound and useful benefits of the presence of French artists” 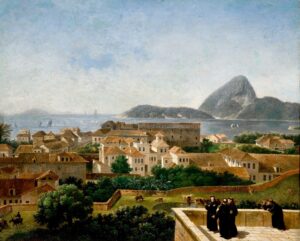 A fine detail by Nicolas Taunay of part of Rio de Janeiro in 1816, from the from the terrace of the convent of Santo Antônio, Once again, the Gloria Hill is just out of sight on the right.

This sort of thing was never going to win any friends. It was one thing for royalty to decree the founding of a Royal School of Science, Art and Craft, quite another to see it brought into being. Just two months before the Uranie arrived (and so more than four years after this first decree was issued), a second decree initiated a Royal Academy of Drawing, Painting, Sculpture and Civil Architecture, but this never happened either. It was not only the Portuguese and Portuguese-Brazilians who were obstructive but even the French consul, Colonel Maler, who viewed the artists as a group of suspect Bonapartists (it was nothing personal. He was just as little help to Louis and the Uranie). Nicolas Taunay was his especial bête-noir, and although he was still in Rio when the Uranie arrived, by the end of 1821, and even though he had been granted the title of Baron by João, he had had enough, and had returned to France. He left behind him his name, attached to a waterfall in the Tijuca Forest, then part of the estate of his friend Madame de Roquefeuille.

Nicolas’ sons evidently found Brazil more to their liking, It was eldest, Félix Émile (1785 – 1881), who had been 30 years old when the team arrived, who would soldier on and eventually succeed in establishing an outpost of French culture. He would become the Director of the Imperial Academy, the successor to the Mission, and is credited with having placed artistic education on a firm footing in what was, by then, an independent country. It was, of course, done according to the norms promoted by the artists of the French Mission, and led to the complete abandoning of the baroque style that had been favoured by their opponents.

The other brothers are harder to follow. Nicolas followed French custom not also in art but also in the naming of his children. They all had far too many names, chosen from far too small a list, Just as Louis de Freycinet was christened Louis Henri despite there already being an elder brother Henri, so there seems to have been a Charles Auguste Taunay who was possibly the same man as the Auguste-Marie-Charles Taunay who was a senior officer in the army and served in the campaigns in Bahia, Piauí and Maranhão. He was perhaos also a translator and wrote the Manual do Farmer Brasileiro and other monographs on agriculture, founded the French language newspaper, the Messager du Brésil and the Imperial Society of Agriculture, and was an active contributor to the Jornal do Comércio. If this all seems too much for one man, maybe another brother’s achievements have been allocated astray. Could some of these things have been done by Théodore-Marie Taunay, a Latinist, a translator, a poet, and for many years French consul in Brazil who joined the abolitionist movement in the 1880s and was a founding member of the Sociedade Auxiliadora da Indústria Nacional.? Or by Hyppolite, another literary Taunay, this one a Hellenist? He translated Aesop and Anacreon and wrote, together with Ferdinand Denis, a book entitled Le Brésil, ou Histoire, moeurs, usages et coutumes des habitants de ce royaume (1822), which is an important record of Brazil at the time of the visit of the Uranie. Was there also an Auguste Marie Antoine who failed to survive infancy ? In this nightmare of nomenclature it is hard to be sure of anything 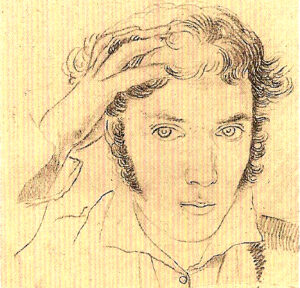 One thing, however, is certain because he played a large part in the story of the Uranie expedition. There was a youngest son, Aimé-Adrien, who was only 16 when the Uranie arrived, but already a sufficiently talented artist to be taken on board and go with the expedition around the world. His drawings and paintings are to be found in Paris and in museums and galleries wherever the Uranie went. There is a particularly fine collection in Honolulu. By the time he reached France his father was already preparing to leave Brazil nut, whether or not he knew that, it was to Brazil that he returned. Once there, he continued his career as a scientific artist and draughtsman, and in 1825 he joined one of the expeditions into the interior led by the Russian consul, Georg Langsdorff. In January 1828 he was drowned while attempting to cross the Guaporé River in the approximate centre of the South American continent.