A new statue in Zagreb

The Republic of Croatia can lay claim to being the homeland of two scientists whose names are, if not exactly household words, have at least integrated themselves into the international vocabulary. The more widely recognised of these, thanks largely to the spectacular publicity arising from the decision taken by the world’s richest man, Elon Musk, when naming his company, is that of Nikola Tesla, the father of electric power. In the Croatian capital of Zagreb there is evidence in forms rather more tangible than a company name that he is not forgotten. There is a statue of him in the heart of the city, and a street is named after him. 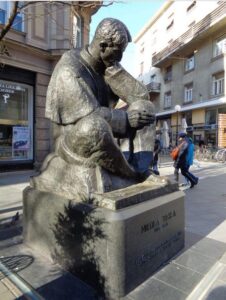 With Tesla, however, there is a problem. Although he was born within the present-day borders of Croatia, his father was a priest of the Serbian Orthodox Church and his birthplace of Smiljan lies in the heart of the former military frontier, in which the bulk of the population would, prior to the wars that attended the break-up of Yugoslavia, have identified themselves as Serbs, rather than Croats. Their ancestors were enticed there by the Hapsburgs from the early 1500s onwards to defend the frontier with the Ottoman Empire. Moreover, Nikola himself left the country for the United States at the age of twenty-eight and became a naturalised American.

The other great scientist from Croatia to make his mark on the Twentieth Century was much more satisfyingly Croatian. Andrija Mohorovičić, who gave a part of his name to the Moho, the geological boundary between the crust and the mantle (and, officially but seldom ever in practice, the Mohorovičić Discontinuity), was born in the fishing port of Volosko, at the head of the Kvarner Gulf, qualified as a physicist in Prague, and taught meteorology in Slavonia and then at Bakar, only  few miles from his birthplace, Having established a reputation in Bakar, he then moved to Zagreb as head of the Meteorological Institute, which at the time was also responsible for seismology. And in Zagreb, unlike Tesla, his near-contemporary (he was born in 1857, Tesla in 1856), he remained for the rest of his life. It is true that for the final seventeen years of that life (he died in 1936) his birthplace lay within the borders of Italy, but the Italians, while respecting him,  have never claimed him. In Volosko, now firmly in Croatia, he is celebrated by a small bust on a plinth by the seashore and plaque on the house where he was brought up. Almost inevitably, the geophysical institute in Zagreb is named after him, but still, until this year, he had no statue in the capital. 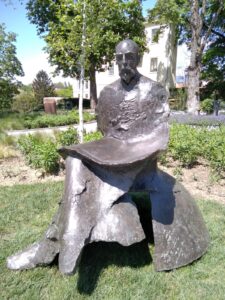 Now, at last, he has that statue. Not down in the bustle and rush of the commercial heart of the modern city with Tesla,, but in the oldest part, the Upper Town, in the Grič Park with its stunning views across the city to the Sava plains. A city in which the worst effects of earthquakes have been mitigated since his time by the building codes he established, and to which much of his later life was devoted. And perhaps, with the eye of faith, that view can be extended across the 50 kilometres of the flatlands to the small town of Petrinja, which was so badly damaged in the earthquake of January 2021 and which is so close to the epicentre of the earthquake of 1909, the event that led Mohorovičić to his discovery of the Moho.

I do, however, have one complaint. The statue is that of a very old man, but while it is true that Andrija’s great moment came rather later in his life than it has for most scientist (he was in his early fifties), he was a long way from being old. It is a pity that great scientists, when they are remembered at all, are so often remembered in images recording the way they appeared when their lives were nearly over.