The last twelve months have not been kind to Croatia. In March 2020 two large compressional earthquakes and a series of aftershocks caused extensive damage in the capital city, Zagreb. Then in late December an even larger earthquake, this time with dominantly transcurrent motion, almost destroyed the small town of Petrinja. That there was a linkage between the two sequences is without doubt, but there were also links to events important to the Earth Sciences which took place more than 100 years ago.

The whole area of former Yugoslavia (the present day states of Slovenia, Croatia, Bosnia-Hercegovina, Serbia, Montenegro and North Macedonia) is prone to earthquakes that are consequences of the relentless advance of the northern edge of Africa towards the European section of the Eurasian continent. In the similar but earlier collision between India and Eurasia the two continental margins seem to have been more or less parallel and rather linear, but the pre-collisional southern edge of Europe was disorderly and fragmented. As a result, collision in Croatia is oblique. Africa is moving north but the contact zone between the plates represented by the mountain belt of the Dinarides runs from the south-east to the north-west. Within that zone individual crustal blocks jostle for space at faults where movements are mainly horizontal but may also involve compression and, more rarely, extension. Mountains are pushed up, but some blocks go down.  The broad valley of the Sava River, extending south-east from Zagreb, forms a separate block bounded by the faults that have been responsible for the recent disasters, but which have also made geological history. 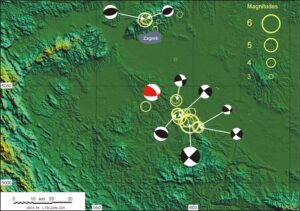 Earthquakes in Croatia, March 2020 – January 2021. The red and white fault-plane solution (FPS) ‘beach ball’ is centred on the location of the 1909 earthquake studied by Andrija Mohorovičić. The earthquakes in late March 2020 were confined to the area north of Zagreb, those further south occurred in late December 2020 or January 2021. All earthquake locations, magnitudes and fault-plane solutions are from the catalogues of the United States Geological Survey.

The Popusko Fault along the south-western side of the Sava valley has a very clear topographic expression, as is often the case with faults that are almost vertical and where movement is mainly horizontal. On the 29th of December 2020, as the Dinarides sough to move north-west relative to the Sava valley, there was a Magnitude 6.4 event. The two strong (Magnitudes 4.7 and 5.4) precursors on the previous day and the numerous aftershocks that continued throughout the following January were concentrated in the same region and, with one exception, were the products of very similar movements, which a geologist would call right-lateral, but the fault had been seismically quiet for more than a hundred years. The last strong event, with an estimated 5.7 Magnitude, took place as long ago as 1909,  but one seismologist in particular was ready for it. Andrija Mohorovičić’s time had come, but it was an earlier event that gave him the tools he needed.

The faults close to Zagreb are very different.  In the earthquakes in March 2020 (two shocks with Magnitudes 5.3 and 4.6 occurring less than an hour apart, with a brief aftershock sequence) it was the vertical movements that dominated, raising the Medvenica mountain immediately north of the city a little bit higher above the Sava plains. Once again there was a destructive historical precedent. In 1880 an earthquake with an estimated magnitude of 6.3 had also raised the mountain, and it also destroyed much of Zagreb. The disaster prompted the Meteorological Institute in Zagreb to spend money on expensive state-of-the-art seismographs, and in Mohorovičić they found a man who would know how to use them. And, crucially for the history of geophysics, who would know how to combine his own measurements with arrival times recorded on similar seismographs scattered throughout Europe to draw truly earth-shaking conclusions.

Even the most cursory of examinations makes obvious the way in which the two faults are linked. Medvenica is the surface expression of a barrier to crustal displacement. There is something about the structure of that area that is preventing the Sava valley moving to the northwest, and that is also holding back the Dinarides, but, eventually, with all of Africa doing the pushing, something has to give. Failure may occur first at Medvenica, but that offers little relief, because Medvenica movesd mainly up, and the Dinarides want to move sideways. It may take thirty years for failure to occur on the Popusko, as it did at the end of the 19th Century, or just twelve months, as it did recently, but it will happen.

There is, however, a complication to this simple picture. The information assembled by Mohorovičić showed very clearly that although there was some horizontal movement in 1909, the main movement was vertical. Only one of the events in the recent sequence has been shown to have involved this sort of motion.The fault trace in the subsurface must also have been a little different. Different enough to be a different fault? There is a ready candidate for a name.

It could be called the Mohorovičić Fault.