The path taken by geoscience in the Twentieth Century might have been very different without the work of two remarkable meteorologists. One of these was, of course, Alfred Wegener, often considered to be the founder of continental drift, but he lived and died a meteorologist. Indeed, he died in 1930 high up on the Greenland ice cap because he was a meteorologist. For him, earth science seems to have been little more than a hobby. And for the other one?

As I began writing this blog an intense but mercifully brief storm was making its way across the Kvarner Bay that separates the Istrian Peninsula from the coast of Dalmatia. It hammered Rijeka, from where I had been watching its progress, and continued eastwards towards the little port of Bakar. It then moved inland and unkindly inflicted severe flooding in the Croatian capital of Zagreb, still recovering from the effects of the damaging earthquake that had occurred there just four months earlier. In a few hours it completed a journey that, with some deviations, had occupied the first thirty years of the life of one of the best known, and most often mispronounced, founders of modern earth science 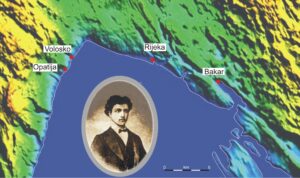 The northern end of the Kvarner Bay. In the mid-Ninetweenth Century the city of Rijeka was largely limited to the location shown, but it now extends for several kilometres along the coast in both directions. The inset shows Andrija Mohorovičić in his early twenties.

Andrija Mohorovičić was born in Volosko, near Austria-Hungary’s seaside resort town of Opatija, in 1857, and there he attended the local primary school. He would have been taught in his mother-tongue, Croatian, but must also have been very familiar with fiumano, the local dialect of Italian. He then went on to the high school in Rijeka; he was an outstanding student, sufficiently gifted in mathematics to be enrolled in university in Prague at the age of eighteen, and enough of a linguist to cope with the language of instruction being German. To tongue-tied Anglophones it can seem that he must have spent most of his time learning languages, but his sort of proficiency was unremarkable in Austria-Hungary. Brilliant though he clearly was, it is unlikely that he or anyone else could have imagined that a hundred years later there would be a school  in Rijeka named after him.

Four years later, armed with a degree in physics and mathematics, Andrija left Prague and began a teaching career in Zagreb but soon moved on to teach at a High School at Osijek, in Slavonia. From there, in 1882, he obtained a post as a teacher of physics and mathematics at the Pomorska Škola (Nautical School) in Bakar, and moved back to the region where he had grown up. 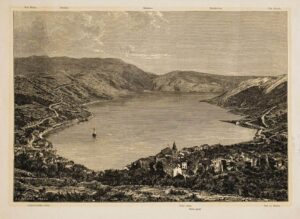 Bakar, in the late Nineteenth Century. The view of the town and bay from the modern motorway, which is supported on stilts set into the steep slopes of the coastal mountains, is not very different today.

The Pomorska was a very special school. It trained its students for careers in the merchant marine, in two-year courses in which the practical side of seafaring was taught in Italian, and all other courses were taught in Croatian (naval cadets, including, about fifteen years later, Georg von Trapp of ‘Sound of Music’ fame, attended the K.u.K. Marine-Akademie in Rijeka itself, and were taught in German). In no other type of school would a physics teacher have had to teach so much meteorology, but in the Pomorska the Second–Year students had a whole course in the subject, and Andrija became more and more fascinated by the study of weather.

“firstly because of the subject itself, secondly because it is of great importance for a student who is going to become a sailor, which is why it is specifically taught at the school, and thirdly because of the topographic position of Bakar”.

The Croatian coast does indeed have a lot of weather, and the location of Bakar is not only spectacular but has features that can amplify its extremes. The most extreme of all is the bora, a savage blast of cold air that spills out of the highlands of the Dinarides and rolls down their seaward slopes into the Adriatic. It can reach speeds of more than 220 km/hr, and for the sailors and fishermen of the Adriatic littoral it can be a killer.  Andrija had a special reason to be aware of that fact, because in the year following his appointment to Bakar he married a local girl, Silvija Vernić, and her father was a sea captain. By the time the couple left the town they had three sons, one of whom, Stjepan, would follow in his father’s footsteps and became a professor of geophysics (a fourth son, Franjo, was born ten years after the arrival of Stjepan and was probably something of a surprise, because Silvija was by that time forty years old).

The bora is not the only notable feature of the weather in this part of Croatia. The storm that was passing through as I began writing came from the west and, as is typical of such storms, which are frequent, was accompanied by thunder, lightning and spectacular cloud formations. Teaching in this environment was not enough for Andrija. He began to carry out research on clouds, and his work began to appear in the national and international literature. While it was Bakar’s environment that provided the phenomena, it required his meticulous documentation and all of his mathematical and instrumental skills, to make sense of them. Frustrated by the lack of instrumentation for making accurate measurements of cloud velocities, he built himself a nephoscope, to his own design, by adapting a camera obscura (pinhole camera) that was to hand. The measurements he made were the basis for his doctoral thesis, which he defended successfully in Zagreb in 1893.

If Andrija had remained a meteorologist, he might have become well remembered as such. In 1889 he published a short (two-page) note in the Meteorologische Zeitschrift entitled Interessante Wolkenbildung uber der Bucht von Buccari (Interesting cloud formation in Bakar Bay) that merited a personal comment from the editor and brought him to international attention. In it he described an extraordinary atmospheric vortex with a horizontal axis, created by the interaction of the bora with the unusual topography of the bay. Widely cited for some years after publication, it was then forgotten for lack of back up, and has only recently begun to reappear in the literature. 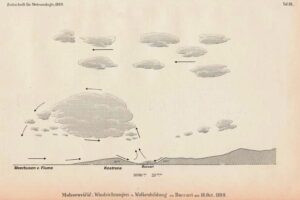 Sketch by Andrija Mohorovičić illustrating the formation of a ‘Bakar roller’. Solid arrows show observed winds, dashed arrows (across the top of the vortex) winds deduced from dynamic analysis.Slightly modified to clarify wording and arrow type

It was inevitable that the relative (and literal) backwater of Bakar would eventually prove too limiting for a scientist of such ability, and nine years after arriving in the town, he left it permanently for Zagreb, where only a short time later he became director of the Meteorological Institute in the heart of the city. That was where he became a seismologist, but for scientists their late twenties and early thirties are commonly crucial years. They may not do their most important work during them, but it is then that they establish the habits and attitudes that will carry with them throughout their careers. Andrija Mohorovičić may not have established a lasting reputation in Bakar, and the work he did there may be largely forgotten, but without Bakar he might never have had a reputation of any sort.

If today you decide to visit his birthplace in Volosko, you can eat pleasantly enough at the ‘Pizzeria MOHO’, at a place setting embellished with pictures of seismograms, but for a better, and cheaper, meal, go to Bakar and order a plate of mixed fish, and perch on a rickety stool at a wooden table at the water’s edge, and look across the harbour at the handsome building in which he began his research career. It was, when he arrived to take up his post, still under construction. Now it is a hotel and, should anyone be interested in a unique historical opportunity, it is for sale for just a million Euros.