The wreck of the Uranie

The wreck of the Uranie

In the minds of most of those on board, the Uranie expedition was almost over when the ship left Port Jackson, and Cape Horn was rounded in almost perfect weather. Sadly, this was not an omen for the future, and the ship was almost wrecked in the Bay of Good Success in Tierra del Fuego, in a violent storm that arose very suddenly and drove her eastwards under bare masts. By the time the wind had slackened, she was so far to the east that her captain, Louis de Freycinet, decided to abandon his original plan and instead make his most southerly measurements at the site of the former French colony of St Louis in the Falkland islands. He approached Berkeley Sound, just north of the present-day capital of Port Stanley, in almost perfect weather, but what happened then was recorded, in typically measured terms, in Folios FL480027 and FL480028 of the diary kept by his wife, Rose.

“On the 14th the weather was better, we headed for French Bay, where we would anchor. We were close to rounding the headland that hid the entrance when the vessel touched on a rock. She stopped for a moment; we continued on our way. A first visit to the hold suggested that nothing serious had happened, but a second found that water was coming in with some force; I think that a piece of the rock struck by the Uranie had remained in the hull and that the renewed progress of the ship had ripped it away.

The place where we had planned to anchor was far away, and all the coasts that surrounded us were steep and rocky: it seemed that the ship must be completely lost. Louis put all his people at the pumps and resolved, if they could keep the ship afloat, to reach some sandy beach and save at least what the Uranie contained, which is to say the instruments and the results of the expedition. How cruel it would be to witness the loss of two years of hard work and effort! However, the water was still gaining, the breeze was light and the strength of the men, who had not eaten for a long time, was beginning to fail. Night caught us in this cruel situation!

Isolated in my cabin, understanding the horror of our situation, I could do nothing useful for our common salvation. I was left alone with my gloomy expectations of the way in which this might end; the ship might sink, and we might barely save our people. What then would be our fate, thrown without any resources on this uninhabited island? I was delivered from my thoughts by the arrival of M. l’Abbé who, exhausted from labouring on the pumps, came to console me in my loneliness and to pray with me for the Supreme Being to take pity on us.

With the water still winning, despite incredible efforts,  the supplies of biscuit were brought up to our dunette so that they did not get wet. It was one o’clock in the morning and the weather was completely calm. The courage of the sailors was sustained in an astonishing way: the officers, working with them, enlivened them and encouraged them to sing, so that the unhappy Uranie, half submerged, resounded with songs and cries quite out of keeping with the real feelings of the crew in this terrible situation.”

This was written soon after the event, at a time when Rose, although at least safely ashore, was facing the terrible reality of being marooned on an uninhabited island, with winter approaching. It is a measure of her courage and her enormous strength of character that she was able to continue her journal at all, but the writing bears testimony to the strain she was under. It is full of deletions, it is disorganised, and in places it is almost illegible. The ‘biscuit’, it should be noted, was not some luxury of her own, but the essential, and almost inedible, basis of the diet of the crew while at sea. Obtaining sufficient supplies of biscuit was a major preoccupation of every ship’s captain, at every port-of-call. 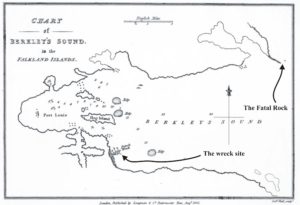 The sites of the collision, and the wreck, superimposed on a map of Berkeley Sound published in London in 1825, just five years after the return of the Freycinet expedition to France and presumably drawing in part on the mapping carried out by the castaways.

Rose was not the only diarist on board. Louis de Freycinet wrote the official report, and the artist, Jacques Arago, published his own diary almost as soon as the expedition had returned to France (in a purchased ship). Neither, at that stage, could mention Rose’s highly irregular presence on board, but twenty years later another account by Aragio appeared, the ‘Souvenirs d’un aveugle‘ (Memories of a blind man). It was very popular and remained in print for at least twenty years, but can best be regarded as fiction loosely based on fact. It gives a very different picture of the events, and of Rose, and one that is very hard to take seriously. His description of the initial contact with the rock is far more dramatic than that written by her (or, indeed) by Louis, both of whom suggest that the initial impact was a minor one and that it took some time for the extent of the damage to be appreciated. Arago’s version of this went as follows:

“The breeze is easing a bit and we are still progressing at our knots, and more steadily. It was four o’clock; the Uranie, lifting her bow with pride, seemed to strut about in its gaits of independence and the harbor opened its broad and calm basin to us …

Suddenly, crack! … The ship stops, fast on a rock and keels over … The deepest silence reigns among us.

Motionless ! motionless ! and the sea whips the sides of the corvette, and everyone looks at each other, with expressions that say “Everything is lost”. An enormous piece of debris from the keel floats around us. At this sight, a sad whisper is heard. Silence! commands the whistle of the brave bosun, and everything was silent again, except the raging flood, which takes its orders from God alone”.

But it is when he turns his attention to Rose that we see Arago at his most extravagant, and most improbable. For one thing, it is barely plausible that the details of any conversation could be so well remembered twenty years later! And it is around such remembered conversations that the whole of the ‘Souvenirs‘ revolves

But during all this time of terrible drama, what of the young and pious lady who had already braved so much? She prayed, but without weakness; she cried, but without cowardice. A few hundred biscuits had been saved from the store, and this poor girl, in the cabin to which they had been taken, guarded them with religious care; she believed that to have touched them would be a sacrilegious theft from those brave men who had been fighting with so much courage for nearly twelve hours; we saw her from time to time at her little window, seeking reassurance from the lines of sailors passing backwards and forwards laden with some useful booty snatched from the waves. Alas! how often, terrified by one of those spectacular curses that sailors use so poetically to express their joys and sorrows, she abruptly withdrew her pretty head and addressed a subdued and simple exclamation of terror to heaven!

– Ah! well! I said to her, throwing a few pistols into her cabin, let these good people do it; they will get you out of trouble, madam: they are angels under the rough exteriors of demons; they talk about you, they worry about you, and you have nothing to fear from them, neither at present nor in the future.

– But those awful songs?

– They think you don’t understand them …

– What you call blasphemy is courage.

– It could take other forms.

– The sailors, madame, are not dressed in muslin, gauze and lace; consistency is needed in everything.

– So you approve of them?

– I do more, I imitate them, I encourage them, I try to inspire them, I improvise, and they respond.

– What a horrible thought!

– May God hear you! Where is the abbé de Quélen?

– He is with the pigs saved from the sea.

– It is the truth, madam; truth alone is guilty. See over there in the long boat; he prays, the brave man; he raises his hand to bless us; he does his job.

– At least he has nothing to complain about; he has lived his life, and if he dies, he will die in a state of grace, while we …

– Let us trust in the Blessed Virgin.

– And in the blessed pumps, madame.

Is there anything worthwhile in this account?  Probably very little. There is nothing in what Rose wrote to suggest that Arago ever came to her cabin, or that the conversation ever took place. It seems an unlikely one. She had been at sea with this same crew for almost two and a half years, and it is hard to believe that she had, on a ship the size of the Uranie, never before heard, during all that time, the sailor’s oaths and curses. Moreover, the quantity of biscuit saved from the sea certainly amounted to more than ‘a few hundred’; there were still some available when the final rescue came, and towards the end of the stay Rose even managed to bake bread for their rescuers from the remains of those that had actually been submerged! And, since the conversation, if it happened at all, must clearly have taken place after the Uranie had been beached and while its contents were being transferred ashore, the final reference to the pumps is not believable. By this stage, the pumps were irrelevant, and Rose actually remained on the waterlogged ship for several more nights before transferring to a tent set up ashore.

The ‘Souvenirs d’un aveugle‘ may be an entertaining read, but it has to be taken with a very large pinch of salt.