Two photographs, straddling my lifetime. The first, taken on December 29th 1940, shows St Paul’s Cathedral in London, during the blitz. The second shows the Capitol of the United States on the 6th of January 2021.  I would like to think that on the second of these dates I was a little further from the end of my life than the year and a half that, on the first of them, separated me from its beginning. But with COVID19 stalking the land, and hospital access blocked for all other conditions, who knows? 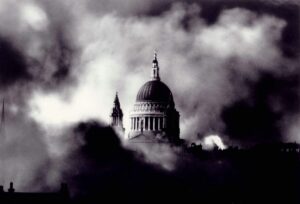 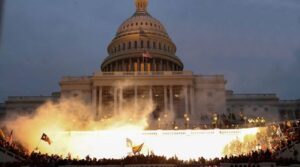 But what has either of these images to do with Ayn Rand?

It might be thought surprising that in her writings she made very few references to the Second World War. It is true that she was in the US throughout its duration, and it was a much shorter war there than in the UK, and more easily ignored even after the US joined in. But Rand was a Russian, and it was that country (and its communist government) that had educated her to tertiary level. If the Czar had not been overthrown, her life might have been more comfortable but it is much less likely that she would have had a university education. She should have been grateful at least for that, but if she had any sympathy for the Russian people during the war, it was far outweighed by her hatred of the system under which they lived.

And the second picture? What would her thoughts have been on the siege of the Capitol?

In the UK, while it would be nonsense to claim that everyone who voted for Brexit was a racist, it would not be a nonsense to claim that it was voted for by most racists who were also British voters. Similarly, while it would be nonsense to claim that all those who stormed the Capitol, or approved of those who did, was a Randian, it would not be a nonsense to claim that the majority of Randians would have approved. Ayn Rand hated government, and Trump’s calls to ‘drain the swamp’ in Washington would have been music to her ears, and those of her followers. Rand also had no patience with the idea of reform. As Francisco d’Ancona told Dagny of John Galt “He said we had to extinguish the lights of the world, and when we would see the lights of New York go out, we would know that our job was done”. In the last few pages of ‘Atlas Shrugged’ we have Rand’s picture of the US after he had succeeded. Millions were dying, but to her that was simply acceptable collateral damage.

Like Rand, the people who stormed the Capitol dreamed of a simpler world, cleansed of corruption and compromise. But like her, they had no idea how to achieve it, except by breaking things.