The partitioning of Timor

The lesser islands of the Indonesian archipelago stretch in a seemingly chaotic jumble between the large and politically divided land masses of Borneo and New Guinea. There is a geological  pattern behind their apparently random distribution, which plate tectonics is now helping us understand, but there is also a political anomaly. Alone among these islands, the middling-sized island of Timor stands out as a land of two masters. The western part, along with all of its neighbours, is part of the Republic of Indonesia, the successor state to the former Dutch East Indies, but the slightly larger eastern part is the main component of the independent state of Timor Leste,

Examine the map a little more closely, and other oddities emerge. Timor Leste is not just the eastern part of the island; but includes the small enclave of Oecussi on the north-west coast and the island of Atauro in the volcanic arc north of Dili. The conflicts between the various European powers as they, in the early modern era, tried control the trade in sandalwood (the main attraction of Timor in their eyes), as well as cloves, nutmeg and mace, have left their mark on the political map of the Twenty-first Century, but when Louis de Freycinet brought the corvette Uranie to Kupang and then to Dili in the early years of the Nineteenth, the final form of that map was still uncertain. What he and his officers have provided is a snapshot of the island as it began its transition from an indigenous polity with a few isolated colonial settlements, governed largely by mixed-race officials, to the formal division that exists today. 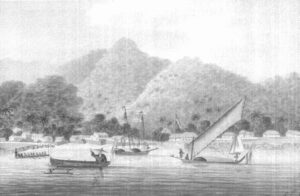 Kupang, as seen by an English visitor in the 1790s. Picture first published in 2007 by Roy Schreiher, in ‘Captain Bligh’s Second Chance’., an edited version of the memoirs of Lieutenant George Tobin, who sailed with Bligh on the Providence.

As the Uranie approached Kupang, Louis had some idea of what to expect, because he had been there before. However, much had happened since 1803, when he had last visited the settlement in command of the Casuarina, a tiny schooner that Baudin had purchased in Sydney for inshore work. In that year, and still more in 1801, during Baudin’s first visit, the brief occupation of the town by the British in 1797 was still fresh in peoples’ memory. Successful at first, the invaders had been sent packing with heavy losses, not by the Dutch but by a coalition of irate Timorese. As they departed, the British used their cannon to reduce the town to rubble; it was the Chinese traders in their houses along the waterfront who suffered most. Fifteen years later, Louis was able to find only one person who remembered those earlier French visits, and during that period the British had been back. Twice

They had not done much for the town. They had, quite possibly, assumed that it would be returned to the Netherlands at some stage, and they had ruled it largely through the people who were already there, who were not Netherlanders. Jacobus Arnoldus Hazaart, a mestizo born in Kupang, occupied the post of Resident from 1810 to 1832, including part of which time when the town was under British control.  A British frigate had arrived when he had only been in post for a about a year and landed some soldiers who occupied the fort. Hazaart counter-attacked and drove them back to their ship, but in 1812 another force appeared and by that time the Dutch Regent in Java had already capitulated. There was no point in resisting, and this time Hazaart made only a token gesture towards doing so. Perhaps as a reward, but more out of sheer necessity, he was retained by the British as effective ruler of the colony for much of their occupation. This lasted until 1816, and one of the more notable events during that period was an inconclusive expedition mounted in late 1814 against the ‘rebel’ raja of Amanuban (Amanoebang to the Dutch), who was busy expanding his territory at the expense of the ‘loyal’ rajas At one stage he had laid siege to Kupang itself, and when Louis arrived in 1818 he was greeted not by Hazaart but by his secretary Tielman. Tielman, also a mestizo (and a distant ancestor of the four brothers who made up an internationally acclaimed 1960s rock band) was in command because Hazaart himself was engaged in another, and what was to be an equally unsuccessful, expedition against Amanuban.

It was not, however, an expedition that involved Dutch forces. The garrison of Fort Concordia, the woefully inadequate first and last line of defence of Kupang, amounted to just forty Ambonese soldiers under the command of a sergeant, and for his forays into the interior Hazaart relied entirely on contingents supplied by the various rajas, some of whom could muster several thousand fighting men. These came not just from Kupang but from Solor (the first Dutch settlement in the area), Roti and Savu, and it was just as well that they did so, because among the seven rajas listed by Gaimard for Kupang was Louis d´Amanoébang, with an army of 6000 men. One of the worries that Hazaart had, apart from the size od the Amanuban army, was that a raja’s men would go only where their raja went, and fight only for him, and a likely cause of the expedition’s failure was that the raja of Denca on Roti. had fallen ill (quite possibly for tactical reasons) and had returned to Kupang, and his 3000 men were beginning to follow him there. As Gaimard noted on p330 of his diary, “the Malays say that all illness comes from God, and that a person who is affected, and those whom he commands, no longer have to fight”

There was more direct evidence that Amanuban might be more than a match for Kupang. Louis, always a stickler for the formalities, was somewhat put out when Tielman declined to fire the salute he thought appropriate, on the rather lame excuse that when Hazaart had gone to war he had taken the keys of the powder magazine with him. When he got to know the man better, he learned of a much more cogent reason, which was that the powder was being saved for something more useful. As he wrote in the Histoire “Given the state of affairs in the colony, this seemed a wise precaution”..

To Louis, Kupang was a disappointment in other ways as well. As it was put in the “Prospectus” that formed the introduction to the start of Volume II of the Histoire:

M. de Freycinet, when he arrived at Coupang, did not find the settlement in the state in which he had formerly seen it during the voyage of Baudin to the Southern Lands. Everywhere there was an air of destitution; the town seemed barely inhabited. The night-time dancing that had given expression to the gaiety and happiness of the inhabitants was no longer seen. The audacious raja Louis of Amanoebang, who was both enterprising and devoured by ambition, had filled the country with terror and alarm .

On p309 of his diary, Gaimard noted that “the population of Coupang is said to number 1,850, made up of a few Dutch mestizos, Chinese (numbering 200) and Malays’”. Trade was almost entirely in Chinese hands, and there are hints in some of the contemporary documents that it was the Chinese of Kupang who were the driving force behind Dutch encroachment on the Portuguese ‘area of influence’, and not the Regent in Batavia. 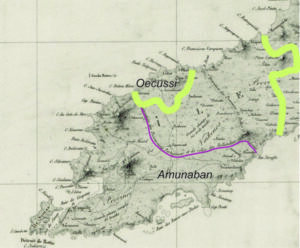 Louis de Freycinet’s map of western Timor. His estimate of the boundary between the Dutch and Portuguese areas of influence is highlighted in mauve. The approximate locations on this map of the modern international boundaries are indicated by broad yellow lines.

After he return to Paris, Louis drafted a map of Timor on which he showed the southern section of the border between the Dutch and Portuguese areas of influence as running just north of the Amanuban territory (over which the Dutch had no control whatsoever) and reaching the north coast roughly along the line of the present western border of the Oecussi enclave, near the modern Timeor Leste town of Citrana. He did this even though he had also recorded in the Histoire his surprise at seeing the Dutch flag flying over Atapupu, almost 100 kilometres further east, and close to the very definitely Portuguese settlement at Batugade. A month later he was in Dili and there he learned more. He was told that on the 20th of April that year 30 soldiers had landed at Atapupu, had pulled down the Portuguese flag and raised the Dutch tricolour. Some Portuguese mestizo soldiers who tried to resist were physically manhandled.

Louis also learned, although he did not see fit to indicate the fact on his map, that the first protests directed to Kupang by the Portuguese governor in Dili had been ignored. Hazaart simply replied that the Dutch flag was flying over Atapupu and it was going to stay there. The governor then took his case to the Dutch Regent in Batavia (modern Jakarta), listing a string of similar grievances and attempts by Hazaart to persuade local rajas to transfer their affections from Portugal to the Netherlands. In the Histoire (Volume II, p542) he wrote that:

“I do not know what effect the reading of all his complaints may have had on the Governor of Java; I doubt, however, that they would count for much. Perhaps there would have been some insincere evasions, giving little satisfaction, and some attempt to temporize, but, in the final analysis, as the Portuguese power is little feared in the Asian archipelago, the swift redress so rightly demanded by the governor of Dili will probably not have been received. It is even likely that the Resident and the Chinese of Kupang will continue their intrigues, and that the Portuguese colony, already so greatly diminished from its former splendour, will steadily lose its possessions and its influence, until a more attentive and more alert government comes at last to the support of an administration that today has been almost forgotten by the mother country.”

No such administration ever came to power in Portugal, or in Goa, the capital of what was left of Portuguese empire in the east. The governor of  Portuguese Timor whom the de Freycinet’s met, and whom Rose’s descriptions paint as energetic and sociable, was replaced in 1819 and died a year later.  His successor lasted less than two years, and Atapupu remained Dutch, isolating the Oecussi enclave. As Louis predicted, the Dutch continued to encroach elsewhere, but expansion brought its own problems as they extended their nominal suzerainty over wider and wider areas which they controlled no more effectively than had their Portuguese predecessors. Two bald men were fighting over a comb that was, in reality, no use to either of them. A treaty signed in 1859 formalised the division of the island, but it was not until 1912 that the locations of the borders were actually defined. Ironically, that was also the year when the Dutch at last achieved some degree of control over Amanuban. They had only 30 years to enjoy it before they were ejected by the Japanese, and their attempts to return when the war was over ended soon after Indonesia declared its independence in 1947.

Thirty years later, Indonesia invaded the newly independent Timor Leste, which had just been abandoned by Portugal, and began a quarter of a century of asymmetric conflict which, despite enormous advantages in men and equipment, it ultimately abandoned as unprofitable. Had the leaders in Jakarta paid a little more attention to the history of that far away “island in the east”, they might have thought twice before starting a war there.