The voyage of the Uranie was very definitely not a voyage of exploration, and when Louis de Freycinet decided to head for the island of Rawak (now Lawak) for his ‘equatorial’ pendulum measurements, he was not heading into the unknown. Despite the remote location of the island, north of Waigeo which is in turn north of the Bird’s Head of New Guinea, the place he had chosen for his ‘equatorial’ pendulum observation was, for the time and area, already remarkably well mapped. Louis even had the location of a place where he could obtain a good supply of fresh water marked on the maps in his extensive on-board library. The ships of Bruni d’Entrecasteaux’s expedition, the Recherche and the Espérance, may have taken water from that same stream, but if they did they were not the first Europeans to make use of it. That honour, almost certainly, belongs to Captain Thomas Forrest of the Honourable East India Company or HEIC. 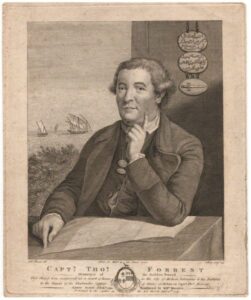 Captain Thomas Forrest. An engraving by William Sharp (1749-1842), appearing in some editions of ‘A voyage to New Guinea and the Moluccas‘.

In the middle years of the 18th Century, the HEIC had not yet become fixated on expanding its hold on the Indian sub-continent. Some of its people were looking further afield, to the East Indies and China, and the most important of these was Alexander Dalrymple, who had joined the company as a clerk (a ‘writer’) when just fifteen years old. Promotion came quickly in the company for men of initiative (partly because so many of them died during their first few years in the east), and by the 1760s Dalrymple had not only visited Canton but had negotiated the establishment of a company outpost on the island of Balambangan, off the north-west tip of Borneo, with the Sultan of Sooloo (Sulu). It was from there that Forrest set sail in November 1774 to explore the islands to the east, as far as the coast of New Guinea. This was a part of Dalrymple’s plan to break the Dutch monopoly on nutmeg and cloves, but the businessmen of the Company had no intention of investing much money in the scheme. Forrest’s instructions included a paragraph (reproduced on p4 of ‘A Voyage to New Guinea and the Moluccas’), which went as follows:

We have just received a copy of a paragraph of a letter from Bombay, wrote by the Honourable Court to that Presidency, which seems to imply very strongly, that it is their intention, to keep affairs in this quarter in as circumscribed and narrow limits as possible. A favourable opportunity however offering, without incurring heavy expences, we are unwilling to let it slip ; as it is an object of the first consequence, and may , if accomplished, turn out extremely beneficial, not only to our honourable employers in particular, but also to the British nation in general

As it happened, Forrest had his own reasons for keeping a very low profile, which had nothing to do with economy. On Page 7 of ‘A Voyage’ he wrote:

Sensible of the jealousy and watchfulness of the Dutch in the Molucca islands, near which it was necessary for me to pass on my way to New Guinea, no less than of the danger of navigating in narrow seas, in a vessel that drew much water, I preferred a small one of ten tons burden.

It was a similar concern for the risks inherent in taking a large sailing vessel into uncharted inshore waters that prompted Nicolas Baudin, twenty-five years later, to purchase the schooner Casuarina in Sydney. But Louis de Freycinet, whom Baudin chose to command that vessel, always had Baudin’s corvette, the Géographe, close at hand. Forrest was taking a tiny ‘Soolo prow’  or garay out into the unknown, with no back-up at all if things went wrong. If he had not returned it is very unlikely that the dividend-obsessed businessmen of the ‘Honourable Court’ would have invested any company funds in attempting to find him.

Forrest also had, quite deliberately, a very mixed crew. The majority were ‘Malays’, from somewhere in the western part of the archipelago (two were from Bengkulu, on the west coast of Sumatra), but there were also Filipinos, men from the Moluccas and three lascars from India. There were also two Englishmen, one a mate, the other a gunner. Neither spoke any Malay, which Forrest considered an advantage, because it reduced the likelihood of a quarrel with the Muslims. He recorded this motley collection in a “List of the Crew of the Tartar Galley”. 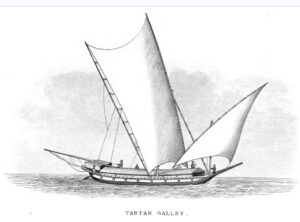 Thomas Forrest’s ship, in which he sailed from Borneo to the Bird’s Head of New Guinea and back to Aceh at the northern tip of Sumatra

On Pages 9 to 11 Forrest described his ship:

The vessel, in which I made the voyage, was called the Tartar –Galley. She was a Sooloo boat, or prow, about ten tons burthen. Her gunnel.- here sat the rowers, sometimes twenty in number. She overhung so much forward and abaft, that she was forty feet long. Her draft of water was generally three foot and a half. We had four swivel guns, two blunderbusses, ten muskets, and six pistols, beside lances, bows and arrows.

She had for a mast an artillery triangle (gin or tripod ) made of three stout bamboos, which could be struck with the greatest ease by three men. On this was hoisted a large four-cornered sail, called by the Malays, lyre tanjong (pointed sail), because the upper corners appear sharp or pointed. I fixed to her a foremast close forward. and a bowsprit: and gave her a lateen, or three-cornered foresail. I also gave her a lateen mizzen; but, when it blew fresh, I took down the lyre tanjong from the tripod mast, as it was a very large sail, and put in its place a lateen sail. The sails then resembled those of the galleys in the Mediterranean. On very great advantage attends the lyre tanjong which is this; that when the wind freshens, it can, without lowering, be instantly diminished or made smaller, by easing or slacking the sheet, and at the same time winding up the sail, by two men turning the cross bar or inch that is fixed to the inner end of the boom, and which spreads the lower part of the fail. By this means, the sail may be entirely rolled up until the boom touches the yard ; the sail being always in this compact manner, as seamen call it, taken in. In the same manner, it may be set again instantly, or let out, by turning the winch back the other way; or half set, according to the weather. The galley steered with two commoodies (rudders), a sort of broad paddle; but one generally served.

She was covered almost entirely with the leaves of a certain Palm tree, called Nipa, such as the natives cover houses with on the south west coast of Sumatra, and in almost all Malay countries ; it being a light kind of thatch, which keeps off sunshine and rain. One small part abaft was covered with boards ; and this made a little apartment, called, by the Malays, Koran, because they seldom travel by sea without the Alcoran, which they always deposit in the best and safest place.

At Tomoguy, one of the Molucca islands, I hauled her ashore to clean her bottom ; and there I raised her one streak or plank, about fifteen inches high, as I found her rather too low to proceed down the coast of New Guinea, she being apt to ship water in bad weather. I also new roofed or thatched her there. At Magindano, (as I had leisure) I decked her, and turned her into a schooner.

Running repairs, verging on complete re-building, were a feature of operations in those waters at that time.

Most people would have their doubts about going for a day’s outing in such a boat with such a crew, but Forrest was away for a year and a half. When he returned, he sat down and drew his charts, among which was a beautiful one of Rawak, to which he added a view of the island as seen from a ship and an imaginative view of the harbour as it might be seen from a yet-to-be invented aircraft. A copy of this chart may have gone with the Espérance in Bruni d’Entrecasteaux’s fruitless and, for him, ultimately fatal, search for the ships of the Laperouse expedition. Labillardiere, who wrote an account of that expedition, noted that the chief of Rawak slept one night on board the Espérance, but panicked when preparations were being made to sail and jumped overboard; his brother, it seems, had been kidnapped by the Dutch, by just such a ruse. In 1793 the inhabitants of the whole area were at war with the Dutch, having allied themselves with some of the people of Seram, Ambon’s much larger neighbour. That war might have accounted for the depopulation of Rawak by the time the Uranie arrived.

Thomas Forrest’s chart and drawings of the island of Rawak or Lawak. The water source is marked immediately above the first ;I; in Waigiou.

As for water, for the crew of the Espérance that had been no problem. “We procured our water near the head of this road in a pretty large river, which our boats could ascend for upwards of a kilometre from the mouth at low water, and twice as far at the top of the flood”. This doesn’t sound much like the river choked with trees described by Gaimard, and it might have been a river near the island of Boni, which Louis de Freycinet originally misidentified as Rawak.

Whether or not that was the case, foreknowledge of a place to find water did lead to one minor disaster for de Freycinet. Gaimard, who visited the site at least once, wrote on p344 of his diary:

Early on the 19th M. Duperrey left in the grand canot to continue mapping the bay. On the 20th the chaloupe and the petit canot went to collect water from the spring on Waigiou described by Captain Forrest. ……..

……..  On the 26th, the canot du commandant ran aground on its way to collect water and was badly damaged: M. de Freycinet lost a part of his table linen and M. Gabert a good number of shirts.

For Gaimard that was enough, because after all, they were not his shirts. Rose de Freycinet, who was more closely concerned, provided rather more detail in a letter to her mother

An event has just happened to us, the unfortunate consequences of which we will feel throughout the rest of the voyage. Having had a fairly considerable amount of washing on board, and there being only one pond in Rawak, at which the laundry would have been poorly rinsed, I was obliged to send it to be washed at the place where we obtained water on Waigiou Island. Four days ago a canoe which was carrying a large part of it, caught in bad weather, was damaged and cast up on the coast: the men who were in it all escaped ashore and were rescued by the villagers, whose dwellings were nearby. All the laundry went overboard and was lost. The same day two of the villagers brought two of our men back on board in one of their canoes, who told us about this accident. As the bad weather continued, it was only today that we were able to bring back the wreckage of the boat and the rest of the men we had sent to get water. [FL676876, FL676878]

Inexplicably, although this letter was one of those used by the editors of the 1926 edition of Rose’s journal to fill a gap left by a missing notebook, this particular passage was not included. This was, however, consistent with what seems to have been their fixed policy, of making her record of the Uranie voyage less interesting than it actually was.