If Ayn Rand’s heroes had talents for anything at all, it was for destroying things. Howard Roark dynamited an apartment block in a fit of pique because his original design was modified to make the place pleasanter to live in. Francisco d’Anconia destroyed the mining empire begun by Sebastian d’Anconia 300 years earlier, not just metaphorically but literally, and Ragnar Danneskjöld was a pirate who specialised in attacking ships carrying aid to poorer countries. These three were, however, amateurs compared to John Galt, the ‘hero’ of Atlas Shrugged, who reduced the whole of the United States to a starving, disease-ridden chaos.

Not quite all of it, of course. The refuge of ‘Galt’s Gulch’, a hidden estate of indeterminate size in the Rocky Mountains, which was originally purchased by Midas Mulligan, provided Judge Narragansett with the security he needed to pen his amendments to the US constitution whilst the rest of the country collapsed around him.

A large part of the world now resembles Rand’s apocalyptic America. Failed states such as Libya, Syria, Afghanistan and Iraq have become battlegrounds for murderous militias, thanks largely to western intervention. Their instability has spread of their neighbours, so that countries such as Chad, Mali and Nigeria, which at least have functioning governments, have lost effective control of large swathes of their hinterlands. And the consequence is, of course, that millions of people are on the move. Displaced from homes where to remain would be to die, they wander the world seeking safety somewhere else. Such was the America that Rand described in the closing pages of Atlas Shrugged, but she never considered the implications for her own little Utopia.

Galt’s Gulch was protected by an optical shield that made it invisible from the air (designed, of course, by John Galt, that multi-faceted genius) and by its remote location in the mountains of Colorado, which had prevented everyone except Mulligan from finding it on the ground.  Unlikely, but Rand must be allowed her fictional devices. What she (and, now, her disciples) cannot be allowed to avoid are the questions that her devices raise. For how long would mere isolation have protected the Gulch in a time of chaos? When peoples start to move, they move everywhere, and some, undoubtedly, would have reached it. The more difficult the journey, the more likely it would be that those that did would be intelligent, skilful and resourceful. But also, by the time they arrived, be sick, starving and desperate. How would they have been received, at the borders of a polity established on the principal that “I will not live my life for any man, or expect any man to live for me”.

Not well, one feels, unless they brought gold with them, because that was the only currency accepted in the Gulch. At the very best, without gold they might have been put to work in Francisco’s new mine, with the threat of expulsion if they didn’t shape up. Rather than accept that as an option, they might have tried to force entry, but there would surely have been a force ready to meet them. Randian doctrine allows a state just three things: an army, a police force, and a judiciary, all dedicated to the protection of private property. The presence of first two in the Gulch is not mentioned in Atlas Shrugged, but the logic requiring their existence is inescapable.

If this speculation is rejected as building fantasy upon fantasy, we can point to our own real life example in the island of Great Britain. We have our own Ayn Rand. We have a Home Secretary cast in her image. We have Priti Patel. 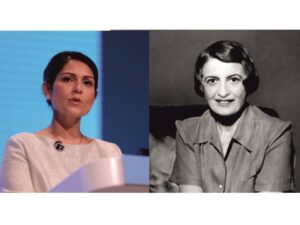 Patel is, of course, no John Galt. Hers is not a genius that can bend the laws of nature to her will. Her talent is of appealing to her constituency, the free-traders, the neo-liberal fanatics and the Little Englanders nostalgic for a golden past that never existed, and she knows instinctively what they want to hear. When it comes to any refugees that may try to cross the UK’s borders, you can forget any idea that she tell that constituency the truth, and that their attitudes look very different when viewed from countries that are bearing far greater shares of the burden while having had far smaller shares in creating it. She will not tell them that France, which took no part in invading Iraq, and the countries of eastern Europe, and especially Greece, which have not for a thousand years had a chance of invading anyone, are accepting far more refugees the United Kingdom. Nor is her constituency ready to be told that many of the problems can be traced back to arbitrary lines drawn on global maps by our buccaneering forebears whose activities laid the foundations for our present relative prosperity. We are in no position to claim that the rest of the world should not come banging on our door, when we so comprehensively broke down so many of its doors in the past.

What Patel did do was instruct her Home Office staff to find ways to keep that constituency happy, and their first resort, as so often in our history, was to blame the French. If France cannot be persuaded to do her duty and patrol our borders for us, she must be forced to do so, and there is always the Royal Navy on call. to be sent to the channel, What it might do there is, of course, unclear. It could not go into French waters to deter migrant boats, nor is it likely that France would allow migrants intercepted in UK waters to be dumped back on their beaches. Even the hardest of our hard-liners are probably not quite yet ready to fire on groups of desperate people, and the idea of creating waves that would drive their boats back to France was rejected as poor PR for a country claiming that its main concern was the preservation of life at sea. 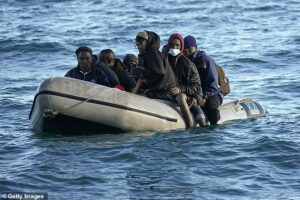 So then there is the Australian example. Intercept the boats, and take their occupants a very long way away. I used to do the same thing with field mice I caught in my kitchen, but at least when I reached a place that seemed suitable to me (although probably not to them) I let them go free. The Home Office plan, as it has been reported, was to follow Australia closely. Once the refugees had been safely transported to Moldova, or Ascension Island, they would be placed behind barbed wire, to ensure they never came back. When safely locked up they could, as happened notoriously on Manus,  be abused and maltreated to such an extent that they would beg to be returned to their ruined homes. It seems that only cost and sheer impracticality led to such schemes being rejected. Now the favoured option is to store them in redundant vessels, rather than risk the contamination of them setting foot ashore. Presumably, given his past expertise with both prisons and ferries, this new generation of prison hulks would be given to Chris Grayling to look after.

It is, of course, a problem without easy solutions, but her acolytes tell us that solutions to the world’s problems were Ayn Rand’s speciality. How would her ‘new men’ have coped with refugees if they turned up at Galt’s Gulch?  Not, surely, by appointing a government committee, since a ruling junta of self-appointed geniuses was already in place. Of those, Rearden would presumably have suggested building a Trumpian wall of impenetrable Rearden metal, and Danneskjöld, never averse to a bit of bloodshed in his pirate days, might well have argued that a few deaths at the borders would be enough to discourage the unworthy from entering, and have been prepared to make sure that those deaths occurred. But then, no doubt, John Galt would have intervened with another of his magical ‘scientific’ solutions, and would have transported the Gulch and all its worthy inhabitants to the mid-Pacific, where there would be no risk of their having any contact with any of common humanity..