As Ayn Rand, exercising her author’s prerogative, continued to stalk the corridors of the Taggert Comet as it headed for disaster in the Winston Tunnel, she reached Roomette 10 of Car No.3, occupied by “an elderly schoolteacher who had spent her life turning class after class of helpless children into miserable cowards, by teaching them that the will of the majority is the only standard of good and evil, and that a majority may do anything it pleases, that they must not assert their own personalities, but must do as others were doing”.

How unlike my own primary school days, which was the last time I had a woman teacher***. I cannot remember her, or any of the others, ever instructing me to do what the others were doing. Most of their time was spent telling me to do what they wanted me to do, which was usually something very different.  Teachers have, on the whole, an appreciation of autocracy, because unless they have some sort of control over their classes their students are not going to learn very much. Teachers such as the one described by Rand perhaps do exist, but must surely be rather few in number. Most of their colleagues will be found trying to teach, on their own, classes of around thirty children, and it is certainly not in their interests to allow that particular majority to do anything it pleases.

But Rand, even though she seems to have despised most educators, at least thought that education was a good thing. Some of her disciples and ex-disciples took things much further. For them, education was something that should be reserved for the few, and the rest should get out and work, and as soon as possible. 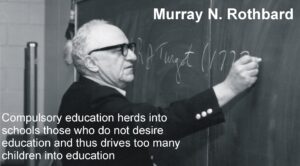 Murray Rothbard (1926-1995) was originally a disciple of Ayn Rand who at one time thought  Atlas Shrugged  “one of the very greatest books ever written, fiction or nonfiction”, but later came to characterize her circle as a “dogmatic, personality cult”. He was even more extreme than Rand herself, and thought that too many children were being educated.

Murray Rothbard, a co-founder of the Ludwig von Mises Institute for Austrian Economics, was one of these. One of Rand’s circle when Atlas Shrugged was nearing publication, and an enthusiast for the book when it was first published, he later moved into opposition. Rand was too moderate for his tastes. Like her, he had no children himself, but unlike her he did not simply ignore their existence. For him, they were a problem that had to be faced, and in a footnote on the 93rd of the 1000+ pages of Man, Economy and the State, his 1962 magnum opus, he faced it:

The problem of self-ownership is complicated by the question of children. Children cannot be considered self-owners, because they are not yet in possession of the powers of reason necessary to direct their actions. The fact that children are under the hegemonic authority of their parents until they are old enough to become self-owning beings is therefore not contrary to our assumption of a purely free market. Since children are not capable of self-ownership, authority over them will rest in some individuals; on an unhampered market, it would rest in their producers, the parents.

The two words underlined are in italics in the original

Child worker in an underwater gold mine in the Philippines.

Rothbard did go on to admit that, in what he called “this unique case”, the property owners’ rights were not absolute.  Children should not, he thought, be injured at will, because they began to acquire the powers of reasoning soon after birth and possess the potential to become full self-owners. However, in a much later section of his monstrous book he was very definite that it was not desirable for them to be allowed to just wait until they achieved self-ownership before they embraced their destiny as functioning economic units. On pp 1111-1112 he launched into an attack on child labour laws. He wrote:

Compulsory unemployment, of course, reduces the general supply of labor and raises wage rates restrictively as the connexity of the labor market diffuses the effects throughout the market. Not only is the child prevented from laboring, but the income of families with children is arbitrarily lowered by the government, and childless families gain at the expense of families with children. Child labor laws penalize families with children because the period of time in which children remain net monetary liabilities to their parents is thereby prolonged. Child labor laws, by restricting the supply of labor, lower the production of the economy and hence tend to reduce the standard of living of everyone in the society.

Child labor laws may take the form of outright prohibition or of requiring “working papers” and all sorts of red tape before a youngster can be hired, thus partially achieving the same effect. The child labor laws are also bolstered by compulsory school attendance laws. Compelling a child to remain in a State or State-certified school until a certain age has the same effect of prohibiting his employment and preserving adult workers from younger competition. Compulsory attendance, however, goes even further in compelling a child to absorb a certain service — schooling — when he or his parents would prefer otherwise, thus imposing a further loss of utility upon these children.

According to his wife, as quoted in Wikipedia, Rothbard would begin every day with a phone conversation with a colleague: “Gales of laughter would shake the house or apartment, as they checked in with each other. Murray thought it was the best possible way to start a day”. And when I first found these paragraphs, I thought that I too must be sharing a joke, somewhat along the lines of Jonathan Swift’s ‘Modest Proposal’. But the more I looked, the less evidence could I find that this might be the case. Rothbard was serious. If his ideals of government were ever to form the basis of a state, its younger citizens, thrust into the marketplace under the hegemonic authority of their parents, might also not entirely see the joke. But at least they would no longer be net monetary liabilities.