Shortly after Lady Chatterley’s Lover was re-issued by Grove Press in 1959, a spoof review was published in Field & Stream that treated it as a book about game-keeping, with a little rather irrelevant background added. No-one, as far as I know, has attempted a similar joke review of ‘Atlas Shrugged’, but if one was done, it would surely have to treat the book as being primarily about railways.

The past few weeks have not been good ones for rail travel. Only this week there was an accident in Egypt in which 19 people died, and two weeks ago a worse crash in Taiwan, which killed more than 50 people and injured many more. In this latter case, as in almost all such accidents there were multiple causes. The reports talk of a truck driver who didn’t fully engage his handbrake (haven’t we all done that?) and a lack of barriers around the permanent way that allowed his vehicle to roll onto the track. The latter error, if true, would have been far more culpable but less likely, perhaps, to be punished.

A train crash, and the reasons for it, is also one of the main events in Atlas Shrugged. The description of the crash itself, and the events leading up to it, are probably the best bits of writing in the whole of the thousand plus pages and, because of that, the most revealing of the threadbare nature of Rand’s ‘philosophy’. The culmination of this particular tale comes when she, as author, gloatingly stalks the corridors of the doomed Comet express, noting in each car that just one person was still awake and explaining exactly why each of them deserved to die. 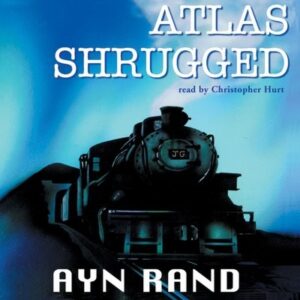 The cover of an ‘Atlas Shrugged’ audiobook. Ironically, it shows a steam engine, just the sort of coal-burning monster that in the book was responsible for the Winston Tunnel disaster.

First, though, an summaryof what had happened. The Comet, the flagship of the Taggart fleet, was heading for California, carrying with it one Kip Chalmers, a politician on the make who was determined to get there in time for a vital rally. Just as the train was approaching the Rocky Mountains, the diesel locomotive was derailed by a split rail. Miraculously, the carriages were all intact and no-one was hurt but the engine was a write-off. In some mysterious way, the carriages were brought past the derailment to the station at Winston, just short of an 9-mile long tunnel. The only engines available were coal-powered, and could not take the train through the tunnel because the fumes in the enclosed space would kill everyone on board before the far end was reached.

Chalmers was not happy, and used all his political pull to get the train moving, and that led to the decision or lack of decision taken be a series of people determined to avoid all responsibility, to attach a steam locomotive, and the fortuitous emergence of a driver drunk enough to take on the challenge.

Of course, it did not work. The train stalled in the tunnel and, just to make sure there were no survivors, an Army special carrying explosives ran into the back of it and exploded.  Rand’s gloat begins:

“The man in Bedroom A, Car No. 1, was a professor of sociology who taught that individual ability is of no consequence, that individual effort is futile, that an individual conscience is a useless luxury, that there is no individual mind or character or achievement, that everything is achieved collectively, and that it’s masses that count, not men”.

Atlas Shrugged was published in 1957, but it had had a long gestation. According to Wikipedia, Rand first had the germ of the idea while she was still in Russia. The plot of the novel she sketched out then, but took no further, revolved around an American heiress who came to the rescue of a fully communist Europe. It was an early example of Rand’s worship of wealth. Not just hard-earned wealth, of the sort approved by the fictional John Galt , but the inherited wealth of the equally fictional Dagny Taggart and Francisco d’Anconia. The sort Rand herself might have enjoyed, had the revolution never happened.

In 1926 Rand left Russia, where the communist ideology had at least allowed her, a woman, to get a university education (something she might not have enjoyed if the revolution had not happened), and immediately fell in love. Not with anything so mundane as a person, but with America itself, the land of  skyscrapers and of a political system that allowed the flourishing of the sorts of businesses of which her father had been robbed.

She had three years to enjoy those raptures, and then something terrible occurred. The stock market crashed and the Great Depression began. And then something even worse . Roosevelt introduced the New Deal, and Big Government began to stalk the land.

Even Rand could see that the Depression was not entirely the fault of government, and that the capitalist system she had loved must take some of the blame. How could that have happened? It could only have been because the system had been infiltrated by hordes of pseudo-capitalists – the sort of people who were now making money out of the vast government contracts that the New Deal brought in its wake. The cast of Atlas Shrugged was already assembled in her mind, and her ideas were fully formed.

And there they solidified. The Second World War seemingly passed them by without any effect, even though Rand reportedly began work on Atlas Shrugged in 1943, when the war was at its height, and the first draft was completed in 1946, when it was only just over. The advent of air travel made no impact on her tunnel vision. In Atlas Shrugged aircraft are the playthings of the rich. Buses figure not at all, even though as early as 1935 inter-city buses were already carrying more passengers than the railroads. All these things were nothing to her, and the mundane bus could never match the giant engines on their gleaming rails that were, for her, the epitome of the American Dream.

Was the ‘professor of sociology in Car No 1’ written in to that 1946 draft, one wonders. And one wonders even more where Rand found her model. There would, presumably have been at least one, but they must have been rare birds indeed. The war may have been fought by the masses, but there cannot have been many people who believed by the time that it was over that the individual characters of Hitler, of Stalin, of Churchill and of Roosevelt had nothing to do with the shaping of the events of the previous seven years.

But then, it is always easier to win an argument against men of straw than real people. And best to kill them off quickly, once they have served their turn.