While preparing the English translation of Joseph-Paul Gaimard ‘s Uranie diary for publication, one’s thoughts inevitably sometimes turn to his‘silent’ senior partner in the ship’s medical team, Jean René Constant Quoy. The association between the two men was an enduring one, since after they had completed their work on the Zoologie volume for the Uranie voyage, they repeated their roles on Dumont D’Urville’s first voyage in the Astrolabe, and after that worked together on the reports of that expedition also.

Despite this, Quoy has remained a shadowy figure. It is not that he really was ‘silent’, because he claimed that his was the major role in the writing of the scientific reports, and he was also quoted extensively by Louis de Freycinet on the geology of the places visited by the Uranie. He was almost certainly the driving force behind the significant paper that he and Gaimard presented to the Académie des Sciences on the formation of coral reefs, and Dumont D’Urville also quoted him quite extensively in notes at the end of each  of the five ‘Histoire du voyage’ volumes of the ‘Voyage de la corvette Astrolabe’. These notes were, however, generally factual and dispassionate, and from none of this mass of material does any clear picture emerge of a personality. How much better if he had kept a diary!

If he did do so, it remains hidden, but after he retired in 1868 Quoy did sit down to write his memoirs. What happened to them during the first fifty years of their existence is something of a mystery, but between 1917 and 1925 they were published, almost in serial form, in the pages of the Bulletin of the Société de Géographie de Rochefort. A brief introduction states only that the notes were placed in the hands of the society by ‘M. Belenfant, de Trizay’, presumably either the businessman Émile Belefant who built the neo-Gothic château in Trizay, a few kilometres from Rochefort, in 1887, or one of his descendants. It was also noted that  the parts of the memoir leading up to Quoy’s arrival at the Ecole de Médecine Navale in November 1806 were going to appear in the Revue du Bas-Poitou .

Unsurprisingly, the publication of the memoirs in such obscure journals at such a time attracted little interest, but in 2009 Michel Sardet used extracts from them as the basis for a copiously illustrated book that has brought Quoy back to life. On p64 of ROCCAFORTIS 64 (2010) a reviewer wrote that “We would like to thank [Sardet] for not only having brought the person of Jean-René Quoy out of oblivion but also for making us want to undertake the complete reading of these unpublished Memoirs”. And, for anyone who might wish to do that, the Bibliotheque National has put the journal itself on line.. 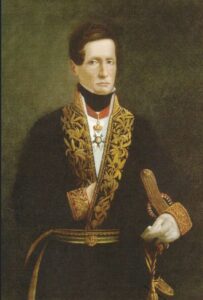 Jean René Constant Quoy (1790-1869). It is not a particularly appealing image, but as he is wearing the cross of a Commander of the Legion of Honour, the portrait has to be dated to 1852 or later and he was already at least in his sixties.He may have had a less forbidding appearance as a young man.

What do we learn from them? Less than might be expected about the voyage of the Uranie. Where it is mentioned, it is as little more than an afterthought. It evidently was not, in Quoy’s opinion, a very important episode in his long and very full life. Although he was only three years older than Gaimard, and just twenty-seven when the Uranie left Toulon, his career in the navy up to that point had been a much more active one and that particular voyage would have been for him much less of a seminal event. In 1808-1809 he served as an assistant surgeon on a voyage to the West Indies, and in 1814-15 he was senior surgeon on a voyage to Reunion. The Astrolabe voyage is rather better covered in the memoirs, but the things that really interested him were politics, the internal struggles in the medical service of the French Navy, and his own ascent to the top of that particular greasy pole.

To add to the confusion caused by the oddities in the method of publication, the memoirs are full of out-of-sequence flashbacks. The first time we meet Gaimard within their pages is when he is mentioned as hoping, in 1830, to be asked to go with Dumont D’Urville on the ship that was taking the fleeing Charles X to England, because ‘the king must have a doctor with him’.

The next mention is much more interesting, even though Gaimard is only incidental to the story, which is about the Prussian phrenologist Joseph Gall, a man who had caused something of a stir in Paris with his lectures on his art, or science, and his habit of taking casts of people’s skulls.

Like his predecessor Lavater in the art of Physiognomy, Gall was prone to error. Here is an example of the most obvious. In his collection acquired by the Museum, we see the mould of the top of the forehead of an unnamed person, with this inscription above it: “Travelling naturalist; gifted with an eminent degree of classification faculties”.

Now, this individual was my friend Gaimard, the most disorganised person I have ever known, who has never been able to get any classification into his head; I do not even know whether he could distinguish a species from a genus, confusing everything to the despair of d’Urville and myself, as I shall describe later. If, on the other hand, Gall had tested his cerebellum, there, for example, he could have found a most pronounced faculty for having built a whole life out of a concern for our comrade. [Vol. 38, p. 134]

The ‘comrade’ in question may well have been Louis de Freycinet, who was brought into the scene in the next paragraph.

The author of the phrenology seemed to me to use infinite finesse to arrive at his appreciations. One day M. de Freycinet said to us, “I should like to know whether he will recognize a faculty which I believe I possess.” We accompanied the doctor to his house. After touching his head and the part reported above for Gaimard, he added, “In such a long journey, you must have suffered, under this influence, many deprivations.” “No,” replied M. de Freycinet in astonishment, for it was not this faculty that he wished to have recognized, “these two gentlemen (pointing at us) will tell you what means I employed in order not to be deprived.”  Now, everyone knew that our dear captain had taken his wife with him, and Gall, who was just guessing at that moment, should not have ignored that fact. The faculty that he certainly was unable to identify was M. de Freycinet’s great sensitivity to music, to the point that he, an ardent royalist and hater in principle the Marseillaise, involuntarily had tears of emotion in his eyes whenever he heard the tune played. [Vol. 38, pp 134-135]

Quoy was, it seems, much less of an uncritical admirer of Louis than was Gaimard. A little later on, while recounting his decision, after the Uranie voyage and the completion of the Zoologie report, to return to Rochefort, where he had a teaching post, he had this to say:

I left Paris to devote myself to my duties as a teacher. I could have stayed there as did Gaimard or like our captain Freycinet, no longer wishing to sail. I could see that he would remain there until he retired, as in fact he did, taking 14 years to publish his work, from 1825 to 1839 when the last volumes appeared. Perturbed by such delays, which were not in my nature, I one day had a most lively exchange of views with him on the subject, without, however, ceasing to be good friends. Having finished my volume, which I can honestly say is entirely my own work, I returned to Rochefort.

I must give M. de Freycinet credit for having worked conscientiously and striving to present in the best way possible all the countries we visited. His notes on the ancient and modern Mariana Islands and on the English colony of Port Jakson (Botany-Bay) are comprehensive. Helped by M …, now librarian at Draguignan, he left behind a vast dictionary of the Chamore language which has not been published. For care, order and method, one could rely on this excellent man, who was cold and reserved in his character. The following story illustrates him perfectly: On the Uranie he had a secretary, but this was not always sufficient and he also employed the chief steersman who, in his picturesque Provençal speech, told us how things were going between them: “The captain” he laughed “ makes me write three lines and crosses out two. He dictates five more to me, then erases everything; so that after an hour of work, we are, tronn-de-lère! in front of a paze of erased words, and have to start all over again. [Vol. 38, pp, 165]**

So much, as far as Quoy was concerned, for Louis de Freycinet and the voyage of the Uranie. Concerning the voyage of the Astrolabe, there is more than enough to save for another time, but there is one paragraph that properly belongs here.

A word about our days at sea on the Astrolabe. We put in order the materials collected in each relâche. As soon as the settings for lunch were removed, we worked diligently on geography, landscapes, and natural history. Time was passing too quickly, preparing us to see and study a new land, new men and a whole different nature. When I was seasick, which happened quite often, I dictated, stretched out in my cabin, to friend Gaimard in his. He had become a diligent worker, no longer having femmes sauvages to pursue. Our witty designer Sainson has made the most pleasant erotic album on this subject. [Vol. 38, pp, 170].

Would that we could find that album, but for the moment, I shall leave Gaimard and Quoy in the process of paying a visit, probably in 1831, to Rose de Freycinet, and recounting to her their experiences of the recently established and semi-heretical ‘French Catholic Church’.

In this license of thought and the freedom to say everything, religion could not fail to have its share as well. There arose a so-called French church whose priest, the Abbé Chatel or Chastel called himself Primate of the Gauls. His temple was the Salle Valentino, in the rue Saint-Honoré, where mass alternated with balls of dubious propriety. He practiced there in his own way all the ceremonies of worship: preaching, baptism, marriage, etc.

We went there one day, Gaimard and I, because one has to see everything. The room was full. Mass was said in French, so the priest, turning to the congregation, instead of saying the Dominus Vobiscum, said: “Le Seigneur soit avec vous”. The sermon did not have anything to do with belief; it was all moralising and on subjects on which there was nothing much to say.

We spent the evening with Madame de Freycinet. This amiable woman having asked us to account for our day, we told her where we had been. She cried: ‘Oh! How horrible ! How is that possible ? ‘ Yes, dear lady, it was not for nothing that we went around the world with you. Remember the nocturnal ceremonies of the Chinese bonzes in Timor; the priests of Hawaii with their wooden idols, 20 foot high; the fetishes of Rawack Island, etc. To these it is now necessary to add the Abbé Châtel. [Vol. 38, p. 62]

** Draguignan is a town in the Var. Tronn-de-lère and paze are presumably Provençal. The general meaning is clear, but if anyone reading this is familiar with that language, or can offer a translation, I would love to hear from them.