In the minds of most people who live in the northern hemisphere, penguins are birds of the Antarctic. Southern Hemisphere residents are wiser. Australians, South Africans and South Americans are all proud of their penguin colonies, and the Ecuadorians are particularly proud of theirs, because the penguins of the Galapagos islands are the only ones to venture (although not very far) into the northern hemisphere.

So it has to be accepted that penguins can live close to the equator, but – New Guinea? There are no penguins there, so how did it come about that the gentoo of the Falkland Islands rejoices in the scientific name  Pygoscelis papua?  And what has that got to do with Peter Piper, or pepper?

Joseph-Paul Gaimard, who was the assistant surgeon and assistant naturalist on the corvette Uranie on its round-the-world scientific expedition, kept a diary of his adventures, and on page 342 he began an account of a meeting at sea with three ‘pirogues’ from the island of Gebe, which lies half way between Halmahera and the ‘Bird’s Head’ of New Guinea. Presumably as something of an afterthought, on the next page he added a note in the margin . He wrote that:

The chief or Kimalaha of Gebe tried to persuade M. de Freycinet to come to his island where, he said, there was an excellent harbour. We might have doubted this had it not been confirmed by the reports of M. d’Etchevery. This lieutenant de frégate, commanding the Etoile du Matin, was waiting at Gebe for the cloves that were being brought, at his request, by Bagousk Hunden, principle chief of the king of Patany. “I made use of this delay”, he wrote “to send a canoe with one of my officers to make such observations around Gebe as I thought necessary. He reported to me some details that are not worth repeating, but I think I should note that they found in the western part of the island, four leagues from where we were, a very fine harbour named Poulaseau sheltered from all winds, in which could be moored fifty ships of the line.” 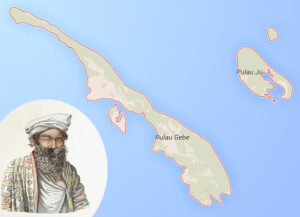 Gebe. The main town is situated on the shore of the broad bay sheltered behind the island known as Pulau Fao. D’Etchevery might have been referring to the main bay or to the deep inlet within Pulau Fao itself. The inset shows the man described by Gaimard as “a decent old Malay named Abas, who was brother of the captain of Gebe; it was he who, during Sonnerat’s voyage, gave Captain Coetivi the first nutmeg plants that were taken to the Isle de France (Plate 39 in the volume of illustrations accompanying Louis de Freycinet’s ‘Voyage autour du monde’. Drawing by Alphonse Pellion)

Knowing the harbour existed, and given that he was looking for a place exactly on the equator to measure gravity, the invitation might have seemed like a god-send to the Uranie‘s captain, Louis de Freycinet, but he had every reason to be cautious. One of the pirogues was tiny, with a crew of just four, but the other two were much larger and their crews, of roughly fifty men each, were armed to the teeth. It did not look like a peaceful trading expedition, and closer acquaintance with the Kimalaha led to near-certainty that it was not. His ‘businesses’ were raiding and piracy, and although at sea he was outnumbered and outgunned by the Uranie and its crew,his home port was lion’s mouth into which Louis had no intention of hazarding his ship.

Earlier French visitors to the area had taken a different view but, as Gaimard’s marginal note showed, their aims were different and could only be achieved by close contact with the inhabitants of the islands. They had come for spices, and because of that they were in greater danger from their fellow Europeans than from any local chieftain. The Dutch of the VOC (Netherlands East India Company) had used methods of extraordinary brutality to achieve their monopoly of the spice trade of the Moluccas, and were prepared to use similar methods to preserve it. The kindest thing that could be said about their methods was that there was nothing racist about them. They were just as ready to execute French or British nationals who were trading in spice as they were to execute any islanders they caught doing the same thing. The profits could, however be enormous and some people were prepared to take the risk, and Gaimard identified one of them in his marginal note. The quotation was, he indicated, an Extract from Mission faite aux iles des Moluques par le sieur d’Etcheverry. Œvres completes de P. Poivre page 226..

This Pierre Poivre was the (almost) appropriately-named Peter Piper of the nursery tongue-twister, but the spices that interested him were not pepper but nutmeg and cloves. From 1767 to 1772 he was the Intendant of both the Mascarene islands of Réunion and Mauritius  (then Isle Bourbon and Isle de France). As such,, he was responsible for the civil administration whilst the governor looked after military matters, but his life up to that stage had been anything but that of a conventional civil servant. In 1740, at the age of twenty, and not an ordained priest, he had gone to China as a missionary, but in that profession he was not a success and was asked to leave. Then, on his way back to France in the French ship Dauphin, he was involved in a sea fight with two British vessel and his left forearm was removed by a cannonball. It may have been a case of just desserts, because it has been suggested that the Dauphin only engaged the British at his urging.

Whether or not that was true, his injuries led to an enforced stay in Batavia (now Jakarta), where he learned to speak the Malay lingua franca and became interested in the spice trade.  Rather than go directly back to France, he went to Pondicherry, in French India, and then to Mauritius, and began a chequered career as a botanist, businessman and smuggler of spices. Somewhat to everyone’s surprise, and possibly also to his own, in 1765 he was asked personally by Louis XV to take up the post in Mascarenes, and once there he immediately began to put into action his plan for ending the Dutch monopoly by planting nutmeg, cloves, cinnamon (and pepper) on islands securely controlled by France. To do that he needed seeds and seedlings and in the years that followed, and being unable to go to collect them himself because of his official duties, he sent out others to do the work for him. Two expeditions were sent out, the first being the one referred to in Gaimard’s note, the second being the one remembered by the Kimalaha’s brother. Both were successful, and on the second, acting as a botanist was a relative of Poivre’s called Pierre Sonnerat, who had been his private secretary.

Most of what we know about Poivre’s early life is based on what he himself wrote in his personal papers and an adulatory summary of his life published by a close friend after his death. Both are now widely considered unreliable as historical documents. Unreliability may have been a family trait, and one that was shared by Sonnerat. His account of his journey to the Moluccas, published in 1776, was entitled ‘Voyage à la Nouvelle Guinée’, but the closest he ever got to that island was Gebe (which is, admittedly, well to the east of the Wallace Line, and therefore Australasian in its flora and fauna). And, not content with making some real contributions to botany and zoology, he plagiarised  other authors and copied some of their drawings. Why he should have chosen to include penguins in his imaginatively expanded collection is a mystery, but he did, and not once but three times. 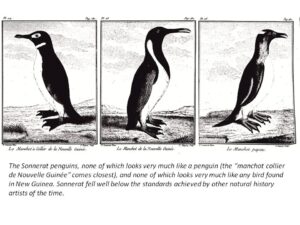 Sonnerat’s description in the original contains a trap for the unwary, in the form of what my daughter, who teaches translation studies, would call a ‘false friend’. The French word ‘pingoin’ refers not to penguins but to the now extinct Great Auk and its cousin, the Little Auk or razorbill. The French word for penguin is manchot, and to avoid any confusion it is safest for the translator to leave both words untranslated. Here, with them in bold characters, is a translation of what Sonnerat wrote concerning the two species:

It remains only for me to mention three birds, all three of the genus manchot. This genus is limited to sea birds; all of the species have lost the power of flight; they walk badly, & when walking carry their bodies straight and upright, their feet are right at the back, & so short that the bird is only able to take very short steps. The wings are only appendages attached in the place where there should be proper wings; their purpose is merely to aid the bird when it is tottering along, and to help it balance in its wobbly passage. The sea is the element of the manchot. Travellers often confuse them with pingoins; they differ from them in two significant ways, in the shape of their wings, which, although short and very narrow in pingoins, still enable them to take-off and fly for some distance; in the shape of the beak, which, in pingoins, is long and flattened at the sides, & in manchots is tapered, rounded and cylindrical. The manchots live on the barren islands of the  Indian and American seas; they come ashore to spend the night, & there make their nests. The impossibility of flying for these birds, and their difficulty in running, place them at the mercy of those who dare to go ashore on the lands that serve them as their refuge. One catches them on the run and disposes of them with blows from a rock or a club: & the limitations of their build, which place them in no state to avoid their enemies, leads to them being considered stupid, since they do not even take steps towards self preservation.

There can have been few more blatant examples of scientific misdemeanour than is contained in the last paragraph, and the first two species have been rightly erased from the scientific lexicon. But as for the third, the name has not only stuck, it has stuck to the unfortunate gentoo, which has never been anywhere near Papua.