To be fair to Ayn Rand, she would surely not have approved of the military take-over in Myanmar, but if ever a country actually tried to put her ideas into practice, it would surely end up as something very like the Myanmar that seems fated to develop now, in February 2021. John Galt’s rousing finale to his mega-peroration in ‘Atlas Shrugged’ went like this: 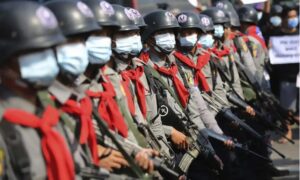 A government reduced to an army, a police force and a judiciary. That is almost what Myanmar has been, and may become again.  Of course,  the army and police in Rand’s ideal state might “resort to force only against those who start the use of force”, but it was never explained how that could be made to happen.

In Myanmar the army does not protect the country against foreign invaders, and never has done. It has been, and is, a very busy army, but its operations are directed entirely against their own people, if they happen to belong to the wrong ethnic group. And in doing this they have the support of the police, whose main concern is to arrest, not criminals, but citizens who happen to have political views that are deemed unacceptable.

The Randians, of course, tell us that their ideal state would be different. That people would voluntarily pay taxes to support these three arms of government, because the laws enforced would be so ‘objective’ that everyone would agree that they were just. But even Rand was unable to define what that meant in practice.

She explained, for example,that “child custody laws must be clearly defined so as to prevent a judge from arbitrarily taking a child from its parents. But within the scope of those principles, latitude may be given to the judge, providing it is clearly limited and defined. For example, she says, the law should specify not only the factors to be considered in determining a child’s best interests — factors such as the moral character of the parents and the financial support they can provide — but also the types of evidence that judges will use to assess character.”

There is nothing at all objective about that.

The army, the police and the judiciary would be just like any other army or police force or judiciary, enforcing laws that were ‘defined’. But since they would be all the government there was, it would seem that the definitions would be left, by default, to them. How like the Myamar of which its generals dream.

In a real world populated by real people Rand is caught by her own philosophy in a trap from which there seems to be no escape. Taxes were to her the ultimate evil, because their collection inevitably involves coercion, but  even her minimalist state required taxation. Generals, police commissioners and judges do not come cheap. Can we imagine these three institutions, run by people subject to no external oversight, being also run, in perpetuity, by people of such probity that they would not ever suggest that, to do their essential jobs, they needed more resources, or more power, or more generous pay?  And higher taxes?