According to Barbara Lee, the highest-ranking Black woman in the US Congress, the United States has spent $32,000,000 on foreign wars every hour since the 9/11 attacks.

How that was allowed to happen is revealing. In the wake of the disaster, George W. Bush presented Congress with a 60-word document giving him, and his successors, the right to make war on anybody they chose, with or without formal declaration and without any democratic oversight whatsoever. Congress signed away its own right to authorise the making of war. The justification was, of course, the need to deal with Al-Qaeda, holed up in some caves in Afghanistan, and nothing would answer but a full-scale invasion.

Which was followed by an occupation into which allies were dragged and which ended, after twenty years. and the loss of a quarter of a million lives, and the expenditure of $US 2.6 tn, in the ignominious scuttle that took place over the last few weeks. Exceeded in ignominy, one should note, only by the parallel but even more comprehensively botched operation disorganised by the UK government.

Ayn Rand thought that governments are not to be trusted, and the world would be a better place if they didn’t exist, and she certainly had a point.. Except that ……… she didn’t quite go so far as to want to abolish them. To make her libertarian Utopia work, she did recognise that a judiciary would be needed, to arbitrate in the disputes that were bound to occur even between freely-contracting parties, and therefore that a police force would be needed, to enforce the judicial decisions.

And an army, to protect the whole system from outside aggression.

This is the sort of state for which another libertarian coined a new word. He called it a Minarchy, the minimalist state. Perish the thought that it might be confused with a monarchy, which in former times could also sometimes be quite minimalist, consisting as it might of a king and his loyal retainers or, from another viewpoint, his band of hired thugs. 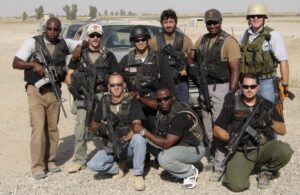 A mercenary band, somewhere in Africa

What Rand left out of her specifications was a blueprint for the way that this Minarchy would control its army. An army is, after all, quintessentially a place where some people give orders, and other people obey orders. At the top there has to be some person, or a small number of persons, who give the ultimate orders. What George W. did in 2001 was ensure that the person who did that would be him. By doing so he took the US one giant step closer to Minarchy. The Republican agenda has always been to hollow out the state’s involvement in such things as health, education and public services, leaving just the Minarch’s ‘Big Three’ as the major, major, major recipient’s of state funding. Ayn Rand would presumably have been delighted.

But there are, of course, dangers in handing such power to anyone, best exemplified in the increasingly pathetic role played by the United Kingdom on the world stage. It was Tony Blair who began this particular phase of the re-shaping of global Britain.

It all began so well. Seeing things going distinctly pear-shaped in the former British colony of Sierra Leone, and realising he had an army at his disposal, Blair decided to use it. In the year 2000, British troops arrived, with the heart-warming result that it is today one of the few countries in which,  when the name of Blair is mentioned, people do not shudder and make the sign to ward off the evil eye.

The other place where he succeeded was, of course,Kosovo, where he deployed his new toys a little earlier, but avoided putting any British  boots actually on the ground. There again, success. And the trouble with easy successes, and the possession of nice shiny toys, is that they tend to make one over-confident.  Give a man an army and he will want to use it. Especially if he has $US 2.600,000,000,000 at his disposal, and is the President of the United States authorized to use military force whenever he chooses, or has the almost dictatorial powers allocated to the British Prime Minister as a relic of the days of monarchy. And he will, of course, have the enthusiastic support of the people actually in the Army, the Navy, and the Air Force, who will fight each other to the death over their slices of the cake but will always agree on one thing. The cake should be bigger.

As Juvenal said  Quis custodiet ipsos custodes?  Who, in Rand’s Minarchy, is going to control the Army?

Murray Rothbard, one of her former fans (and who, before he realised what she was really like he wrote her an embarrassingly adulatory letter), actually split with her over this and similar questions. He, at least, had the wit to identify the flaws in the Minarchy, and to recognise that this particular flaw was big enough to bring the whole ramshackle edifice cascading down..He also had a solution.

No state at all.

Who would judge? Private, and competing, courts. Who would enforce those judgements? Private, and competing, police forces.  And who would protect the citizens? Private armies.  And, if that was coming too close to creating a state, there was always the other American model. Every man (and woman) for themselves, with only their trusty Winchesters or Colt45s for company.

Europe, at least, had its fill of that sort of thing during the Thirty Years War, and has never really tried to repeat the experiment on such a scale again. European states have done some terrible things since that time, but they have shied away from total anarchy.

‘The Hanging‘, from ‘The Miseries and Misfortunes of War’, by Jacques Callot. Placed on public access by the Art Gallery of New South Wales.

There really does seem to be no libertarian way out of this dilemma . Perhaps they should just admit that neither Minarchy nor anarchy will actually work, and that the US should revert to what the founding fathers intended. Real democratic control over an over-mighty executive, with all the checks and balances that implies.

And the UK might give it a try, too.