On the 27th of January 1794 Pierre de Saulces de Freycinet, a successful silk merchant and head of a protestant family long-established in the Drôme, took his two eldest sons, Henri and Louis, to Toulon to be enlisted in the French revolutionary navy as aspirants de 3e classe. Henri was just sixteen years old and Louis was fourteen. It was the start of the close entanglement of their naval careers that would last for ten years. Twenty-two months later, having already spent fourteen months at sea and taken part in three naval battles while serving on the 74-gun ship-of-the-line Heureux, the two brothers had distinguished themselves sufficiently to be offered promotion together to the rank of Enseign. According to de la Roquette, they tried to refuse on the grounds that, as then merely aspirants de 2e classe, they were not yet sufficiently experienced to become officers, but were overruled. 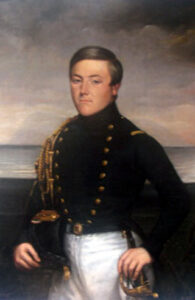 Be that as it may, promotion was rapid, and by 1800 Henri was in command of the goelette la Biche, and fought a battle with a British cutter. In July of that year, by which time both were lieutenants de frégate, he and his  brother had been appointed to the Baudin expedition to the terres australes, Henri to Baudin’s ship, the Géographe, Louis to the Naturaliste captained by Félix Hamelin. It was the first time that they had  servied on different ships.

For both the expedition was formative. It was thanks to it that their names are so well remembered in Australia, where, among many other stretches of coastline, they mapped what was to become known as the Freycinet Peninsula on the east coast of Tasmania. For Louis it provided his first experience of command, when Baudin gave him the schooner Casuarina for inshore mapping, and as a consequence of transfers between the two ships, the two were again on the same ship, the Géographe, when they returned to France on March 21, 1804. Almost immediately, they were placed in command of the sister-ships  Phaeton and Voltigeur, 16-gun brigs of war. It was at this point their paths separated, because Louis fell ill and had to hand the Voltigeur over to Jacques Saint-Cricq, who had also been on the Baudin expedition. Henri remained in command of the small flotilla of which the Phaeton was the flagship. After a brief period based at Hellevoetsluis in the Netherlands (between 7 September and 16 October 1805, he was out patrolling in the North Sea), the flotilla sailed for the Caribbean. By March 1806 they were in Cayenne, were Henri was singled out for special praise by the governor of the colony, Victor Hugues.

On the 25th of March the Phaeton and Voltigeur were returning to Santo Domingo when they encountered the British 18-gun brig-sloop Reindeer. Fire was exchanged for about four hours before the British vessel managed to escape, having inflicted some damage on the two Frenchmen. Henri was injured in the leg during the conflict.

The following day, with the Reindeer gone, the two brigs were sighted by the British 36-gun frigate Pique (which, ironically, had originally been the French frigate Pallas). Already damaged and also outgunned, the Phaeton and Voltigeur tried to escape but, perhaps as a consequence of the previous days fighting, were overtaken and brought to action. The French accounts of the battle are confused, and leave open the possibility that, despite the disparity in size, Henri attempted to board the British frigate, which had been expecting a simple surrender. In the British accounts, it was the crew of the Pique who boarded the Phaeton after a brief but lethal exchange of cannon fire, and were resisted by the French crew, who had concealed themselves about the ship. Whatever the actual course of events, two things are certain. Henri took a musket ball in the left shoulder and had his right arm removed by a canon ball, and Ransonnet, his second in command and another former member of the Baudin expedition, was wounded twice before the Phaeton, in imminent danger of sinking, surrendered. Shortly afterwards the Voltigeur also struck her colours, having taken little or no part in the fighting, and both ships ended up in the British Navy, as the Mignonne and Pelican respectively.

Had Louis de Freycinet not been taken ill and as a consequence still in command of the Voltigeur, the outcome might just possibly have been different. The two brigs together would still have been outgunned by the Pique, but not enormously so, and Louis might have entered the battle in support of his brother than did St Cricq, whose naval career ended ignominiously in court-martial in 1812.

That is speculation. What is certain is that Henri was taken prisoner and was taken to Jamaica, where he received something of a hero’s welcome, and by the 12th of June he was back in Santo Domingo, having been exchanged. In this he was fortunate, because Napoleon disapproved of the practice and did not allow it in France. It seems the Caribbean went its own way, and both Ransonnet and St Cricq returned to combat.

As did Henri. On July 12th 1808 he was promoted to capitaine de fégate and he returned to sea late in 1809 in command of the frigate Elisa.  It was not a lucky ship, and de la Roquette described its loss. In late 1810, together with the frigate Amazone, he was attempting to take the Elias from Le Havre to link up with the fleet at Cherbourg  when he encountered by an English division and sought refuge under the guns of the fortress of La Hougue, at the north-east tip of the Cherbourg peninsula.

“ where a gust of wind caused his vessel to run aground. In this state, however, he fought the infinitely superior forces which were not long in blockading him. Under fire from their batteries which cannonaded him, for five consecutive days, the brave and skillful commander of the Elisa refloated his frigate and fought a second battle with the floating batteries. He set sail again in bad weather on the night of December 22 1810 but, being forced to hug the coast very closely, a mistake by the pilot led to the loss of the Elisa on a rock bank between Tatihou Island and Reville, near La Hougue.”

The British description of the action, which ends with the destruction of the Elisa by fire at the hands of a British boat party from the HMS Diana, is somewhat different.. In the long battle many of those aboard the Elias had been killed. Whatever Henri’s merits, he was not a captain that anyone seeking a long life would have wanted to serve under.

On January 22, 1811, Henri was court martialled at La Hougue but was honourably acquitted. For him, December 1810 had been an eventful month; on the 13th  his daughter Louise Henriette was born in Paris. No mother is named in the French genealogies, and Henri’s marriage to Clementine Bérar did not take place until February 1815, but Henriette, whether legitimate or illegitimate, was acknowledged and bore the family name de Saulces de Freycinet until she married. Her husband, Félix Lamothe, co-edited Louis de Freycinet’s volume on Meteorology, which was published posthumously, with Henri’s eldest son Louis-Réné..

The Elias was Henri’s last sea-going command, but under the restored monarchy he enjoyed as second career as a colonial administrator, of the Isle de Bourbon (Réunion) from 1821 to 1827, of French Guyana from 1827 to 1829 and of Martinique from 1829 to 1830. He was, it appears, very good at the job, and while in Guyana he was both promoted to the rank of Rear-Admiral and received his letters patent as a baron. He died in Rochefort in 1840, just two years before his younger brother.