Louis and Rose de Freycinet were robbed almost as soon as they set foot in Sydney in November 1819, but Rose took that very philosophically. Indeed, she saw advantages in the British method of founding a colony. In the last of those of her letters to her mother that have survived, posted just as the Uranie was about to leave, she wrote:

In Paris, where we talk about everything, and often talk most about what we know the least, we hardly know of this settlement except under the name of Botany Bay; few people have bothered to read what has been written about this colony, only recently founded, it is true, but already so useful to its mother country. There is, for example, an opinion, based on I know not what, that the climate is unhealthy, but that is not so….. Would to God that the French had a place of deportation as well established as this one! The mild climate has persuaded many government employees to settle here, even when their employment no longer holds them ; and I would not be surprised if, in the general turmoil that is shaking the whole universe, many more people will take refuge here as the country becomes better known. [State Library of New South Wales FL677070]

Rose was not alone in seeing the British example as one worth looking at more closely, and possibly following. Leslie Marchant’s book France Australe (which was published in English under that name in 1982 and was subsequently translated into French) was subtitled ‘A study of French explorations and attempts to found a penal colony and strategic base in south western Australia 1503-1826’, and In it the history of France’s alternating interest and lack of interest in the idea is summarised. It was not until 1819, the year the Uranie visited Sydney, that the restored Bourbon government established a Comité de la Transportation to send convicted criminals around the world but the legal framework for exile was already in place and convicts were already being sentenced to transportation even though there was nowhere for them to go. By 1819 there were more than 15,000 such people scattered around France in holding camps run by the Ministre de la Marine, waiting for ships to take them ……. somewhere.

The committee that was established to consider the possible solutions included Jean-Baptiste Willaumez, Élisabeth-Paul-Édouard de Rossel and  Pierre Roch Jurien de La Gravière, all of whom had sailed with Bruny d’Entrecasteaux on his fruitless and ultimately, for him, fatal search for the remnants of LaPérouse expedition. Willaumez thought that a convict settlement could be set up one of in the tropical colonies that France still possessed in the Americas, while Rossel favoured a site in the temperate zone. It was the temperate zone that won, on this occasion at least, with the choice falling on south-western Australia which Louis de St Aloüarn had claimed for France almost fifty years years earlier. 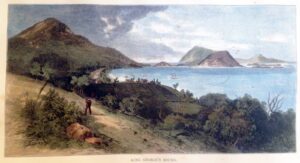 Princess Royal Harbour, King George Sound, Western Australia. From an atlas published in 1888 but based on a sketch made by Edmund Lockyer when he claimed Western Australia for Britain in 1826.

Specifically, it was the Swan River that was originally proposed, until those who had actually been there pointed out that King George Sound, where the d’Entrecasteaux expedition had spent some time, had a far better harbour. The sceptics were outnumbered, but not without a fight. According to Marchant, at least one member of the committee had very grave doubts, claiming that the terrain was arid and there was no fresh water, which Rossel, Jurien and Willaumez all knew to be untrue, and that it was a very long way from France, which all had to admit. Someone, and probably more than one person, must surely have pointed out that the distance had not deterred the British, and that despatching their convicts to a point as far away as possible had its attractions, but the recent loss of both Cape Town (which had been Dutch but under Napoleon the Netherlands had been briefly part of France) and Mauritius made the distance more of a problem. Supply ships would  have to rely on British acquiescence, or complete their voyages without stopping, or call in at harbourless Reunion. The objections were serious enough for the recommendation for a convict colony at King George Sound to be received with only muted enthusiasm. There might have been an upsurge in support had Louis de Freycinet visited the site for a second time (he had been there once with the Baudin expedition) and reported favourably. He did not do so, and France dithered. It was still doing so when, in October 1826, Dumont d’Urville visited King George Sound and wrote:

From all these considerations, I thought then that it would have been difficult to find a more favorable place to establish a colony; so I never ceased to be amazed that the English had not already done so, especially when I reflected that this point was admirably situated, for the ships which go directly from Europe to New South Wales from the south, or for those going from Cape Town to China, or to the Sunda Islands against the monsoon.

From my examination of the French River and of all the land which adjoins the port, I also concluded that in the event that a colony were established at Port King George, no position would be better suited to a settlement than that of our observatory. Indeed, it combines almost all the advantages desirable in such a case: good water, abundant wood, easy defense, a coast accessible by boat in all weathers, and perfectly secure mooring for ships, in the roads, the narrows or in Princess Harbour itself. The first great clearings, the main plantations, would be along the French River, where communications by water with the chief town would be direct, and of the easiest. The singularly abundant fishery would offer the first colonists great resources from the beginnings of their settlement. Finally, there is no doubt that at the end of a few years the production of the soil, both in grain and in cattle, would be amply sufficient for their needs. [Voyage of the Astrolabe, Volume I, pp 114-115]. 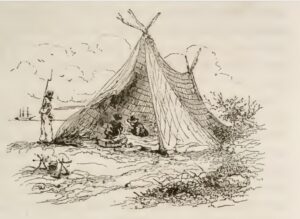 Had such a report been received in Paris from the de Freycinet expedition when it returned to France in 1820, it might well have tipped the scales, but by the time that d’Urville made his visit, it was too late. On 4 November 1826 Major Edmund Lockyer left Sydney on an expedition furnished with “secret instructions” from Governor Darling that, in case of an encounter with the French he was to land troops to signify to the French that ” the whole of New Holland is subject to His Britannic Majesty’s Government, and that orders have been given for the Establishment at King George’s Sound of a Settlement for the reception of Criminals accordingly”. The annexation was formalized on 21 January 1827 when Lockyer commanded that the Union Jack be raised and a celebratory volley be fired by his troops.

France had lost its chance.