The pictures now coming out of Ukraine are horrific, and all too reminiscent of pictures from Syria, Libya, Iraq, Afghanistan and the Yemen. The creation of failed states seems to be becoming a Twenty-first Century speciality, using mid-Twentieth Century techniques. 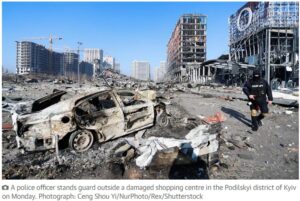 Ayn Rands’ cornerstone work, ‘Atlas Shrugged’ is all about the imagined creation of another failed state. The United States. At the beginning of the book this is virtually the only country in the world that has not already failed, and the US government is busy shipping food and other aid around the world, most notably to a starving Europe. Cue action by the hero-pirate Ragnar Danneskjold, who does not approve of altruism and somehow manages to reconcile his belief in individual liberty with the waylaying of the cargo ships and the theft of their contents, which he then somehow miraculously manages to turn into gold and deposit in the bank of Midas Mulligan. Which is one way in which it can be laundered; no questions are asked, of depositors with Mulligan.

But the US has its own problems, and is being brought to its knees by corrupt government in alliance with company looters who are taking over all the profitable enterprises under the guise of altruism but actually for their own personal benefit. John Galt and his friends and allies decide to precipitate the decline by persuading every competent person in the country to withdraw their labour and join him in the Galt’s Gulch libertarian commune hidden away in the Rocky Mountains, where gold is king and government is absent because, somehow, everybody agrees on everything. It seems that there cannot have been very many competent people in the country anyway, since they all fit comfortably into the one single valley, without a hint of overcrowding. Without them to keep things going, the US collapse becomes catastrophic, and the book ends with a vivid picture of America as a failed state. The lights have gone out in New York, a wide area has been destroyed when a new weapon goes rogue and the iconic Taggart bridge spanning the Mississippi has been cut in half. The population relapses into savagery, dominated by wandering bands of starving looters. Meanwhile, Galt and his friends prepare to take over the country and usher in a new golden age in which altruism will be forbidden (the word ‘give’ was forbidden in the valley – see p. 659 of the Penguin Anniversary edition; that was what passed for freedom of expression in the world of the liberati).

In one respect Rand was right. There is no conceivable way in which the libertarians’ ideal non-state could be established incrementally in today’s world, given the current global dominance of mega-corporations that will defend their executives’ salaries to the last employee and the last shareholder, and the prevalence, in those countries that have not wholly submitted themselves to the control of these organisations, of rule by tinpot, and not so tinpot, dictators. Rand was right, the only way her ideal could be achieved would be by tearing the whole system down and starting again.

But how would that play out? There are no Randian super-heroes waiting in the wings to take over, in the real world. We can look to today’s failed states to get some idea of what would really happen. In all the countries where the rule of law has collapsed, the gangsters have taken over. Small thugs assemble small bands of followers, which  get taken over by bigger thugs with bigger bands of followers. Rand’s starving people would reject Danneskjold’s gold on the grounds that it was inedible and therefore no solution to their immediate problem. The biggest thugs would reject Galt’s utopia, which required them not to use force, because force would be working very nicely for them, thank you. Galt’s unbelievable technologies that sucked power out of the air would be something to steal, because only people with gold would be allowed to buy. Galt’s brilliant mind might allow him to develop weapons that would give him victory, but where would that leave his philosophy? In it he said that he would not ‘ask any man to live for’ him, but how did he intend to stop them expecting him to live for them? In his hour-long radio rant he showed that his only solution was to kill them.

When communism collapsed in the Soviet Union in the early 90s, the free-marketeers moved in to build their Ayn Rand paradise. They have built it, the biggest thug of all is in control and the ruins of Mariupol are the measure of his success.