In the UK, Christmas 2022 is going to be mainly notable for strikes. Rail unions, of all confusing shapes and sizes, nurses, ambulance drivers, all classed as essential services, are withdrawing those services, for varying periods of time. And, as usual, the government response is to treat the symptom, the strikes themselves, rather than the ultimate cause, which is that the political/economic system that is being developed in the UK is one that produces steadily increasing inequality, with increasing numbers of people, many of them doing essential work, being driven into real poverty. The knee-jerk response, as always, has been towards restricting the ability of such people services’ to strike, using punitive legislation and the courts.

Which does rather beg the question – If the services being provided are so essential, how is it that the people who provide them are not decently paid? 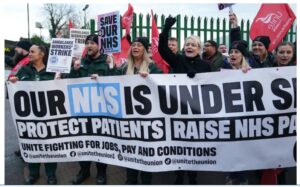 Ayn Rand, of course, would be fine with increasing inequality. Her world view was one that divided mankind into the ‘rational men’ and the rest, with only the former being worthy of consideration. It helps, of course if, as in her books, the rational men (and women) are of god-like physique, extraordinary intelligence and extreme competence. And it is absolutely OK for those people to go on strike, as they do in ‘Atlas Shrugged’.

Rand’s fans would no doubt argue that this strike was different. It did not involve trade union bosses doing deals in smoke-filled room but individual persuasion by the leading lights of the movement of those they identified as worthy of such attention, to withdraw their labour. To the non-fans, it looks very much like the trade union paradigm of free collective bargaining, unfortunately without the bargaining. John Galt and his friends simply withdrew their labour. As was their right, of course, but by doing so as a collective they undermined the free-marketeers paradigm of a bargain freely entered into by contracting parties on an equal footing with each other.

Of course, if such a situation ever existed, we would have to delve back at least into medieval or pre-medieval times to discover it. In the Victorian heyday of so-called free-trade, that freedom was often enforced by cannon rather than canon law, and among the items most freely traded were people. In the modern world, agreements over the price at which labour should be sold are made by corporations on the one hand and workforce representatives on the other. It has to be that way, because the individual worker is powerless (just as the individual shareholder is powerless).  Rand, as always, was invoking a fantasy world of her own imagination.

But what of today’s supposedly ‘extortionate’ demands by the nurses’ union? Unrealistic they may be, but no more unrealistic than the government insistence on the non-negotiability of a pay offer based on the calculations of a pay board made in an era of historically low inflation. Negotiations are usually done that way, since each side is expected to concede something, and each starts from a position from which they know they will have to move if a deal is to be done. If one side states from the outset that their first offer is also their final offer, and all the movement must be by the other side and must be total, then it is clear that they have no intention of doing any sort of a deal.

Meanwhile, we learn that one hedge-fund manager has described Conservative government policy under Johnson and Truss as ‘the gift that keeps on giving’. And since that particular manager reportedly made £220,000,000 by betting against the pound during the Brexit vote (and had the foresight to employ Kwasi Kwarteng, prior to him becoming the UK’s briefest holder of the office of Chancellor of the Exchequer), he should know. But if he and his fellow hedge-fund managers were to go on strike, would we be any worse off? Might we not all be better off, by the amount they are taking from the UK economy?

A little extra reality can be injected into the debate by recent news that the government is seeking to recover £122,000,000 from a bad deal they were talked into by one of David Cameron’s more questionable appointees to the House of Lords. An appointee who, it is rumoured, benefitted by several tens of millions of pounds from the deal that was done.

The cost of that single deal, spread amongst the nurses working in the NHS, would give each an almost £400 bonus. It is no longer true, as it perhaps was in the last century, that the money creamed off by the people at the top, excessive though it might have seemed, would have made little difference if spread around the people at the bottom.

Today, it could have allowed them a winter in which they did not have to decide between heating and eating!