The credit for founding the world’s first scientific society is generally accorded to Great Britain; the Royal Society was founded in London in November 1660. Surprisingly, it was not until more than a century and a half later that the first geographical society was founded, and in this case it was France that took the lead; the Société de Géographie was founded in Paris in December 1821. It was, its founders said, created to contribute to the progress of geographical knowledge; to sponsor journeys to undiscovered lands, to propose and award prizes, to correspond with learned societies, travellers and geographers, to publish unedited accounts as well as polished works, and also engraved maps. Foreigners were to be admitted on the same basis as French nationals, provided they paid the annual subscription of 36 francs and, like their French colleagues, each donated, on acceptance, twenty-five hours of his time. Ten years later, Jules Dumont Durville, only quite recently returned from his first voyage in command of the Astrolabe in the years 1826 to 1829, made a contribution to the Bulletin of the Society that was billed as a book review. It began, however, not with a discussion of the book in question (it was Frederick William Beechey’s  Narrative of a Voyage to the Pacific and Beering’s Strait) , but with an extended rant against the French naval establishment. 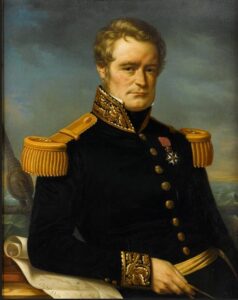 Jules Dumont Durville. Portrait painted by Jerome Cartelier, supposedly in 1845 or 1846, and so after Durville’s death in 1842.

Gentleman, on receiving this book, my first act was to compare the date on which Captain Beechey completed his voyage with the date on which the book appeared, and I saw that less than three years had passed between these two events. This is how the voyages of King, Parry, Franklin, etc. etc. were swiftly delivered to the public. In general, the English understand perfectly how important it is to make known as soon as possible the results of these great enterprises. They think that nothing is more likely to assure the success of these narratives than prompt publication. In fact, nothing is a better guarantee to the reader of the reliability of an author than that he immediately and without any pretensions provides a sincere account of his adventures and observations. Readers will never repose the same trust in a man who wishes to set out in his own account the work of all those who preceded him; inevitably, in the middle of all these external references, the interest that naturally attaches to the voyage itself disappears completely.

With us, the publication of voyages of discovery has for many years gone quite differently. M. Freycinet returned to France in late 1820 and the account of his voyage is still a long way from being finished; six years have passed since the return of M. Duperrey and his account has scarcely been begun; nothing has appeared of the voyage of M. Bougainville, who returned from his expedition more than four years ago; finally, gentlemen, it is with regret that I have to tell you today that the man who is talking to you, and who hoped to complete the publication of the long adventure of the Astrolabe, sees today his hopes in this respect indefinitely postponed. Despite every possible effort, despite all the measures he has taken to fulfill this promise, unforeseen obstacles have delayed the completion of these projects, and he has every reason to fear that his publication will suffer the same fate as that of his predecessors.

Durville had, of course, already fallen out with Duperrey, with whom he had sailed as his second in command on the Coquille, before being rewarded with an expedition of his own. He later inserted a footnote warning the public that, since the reading of the paper, the publishers had again begun the printing of his account of the voyage of the Astrolabe (Duperrey’s Coquille renamed), which had been delayed by three or four months, but the work, including the engraving of the maps, was going slowly for lack of funds from the Ministry of the Navy. In the main text his complaint continued.

What is the reason for these deplorable delays? Such an expedition, truly estimable in itself, and the results of which are capable of honouring the government which sponsored it, excites first of all curiosity and public interest; the captain’s journal is awaited impatiently, in order that a just opinion can be formed of ​​his operations, and that he can be accompanied in his perilous enterprises. But the years pass, the journal is not published, or only disjointed shreds appear which are seldom consulted. New expeditions are made, which obscure the earlier ones and inevitably diminish the interest that  they might have inspired; finally, after ten, twelve or fifteen years, the long-awaited report appears in the form of a few laboriously compiled quarto volumes, but the endeavours that they describe have long since been forgotten and the work, produced with so much effort, time and expense, is condemned to languish on the shelves of a small number of libraries, most of which belong to the favourites of the ministry, without having been advertised to the public. Happy the author must be if sometimes some scholar comes, to shake off the noble dust with which his work is covered, to draw from it some useful information for his own especial studies!

Durville did not choose to mention that in one respect at least, Louis de Freycinet’s expedition had achieved almost immediate fame in publication, because a colourful account of the voyage authored by Jacques Arago, the expedition draughtsman, had appeared in print the year after the expedition returned and was an instant (and continuing) success. It may well have been a sore point that a mere civilian had achieved what the Navy could not. Instead of applauding Arago, Durville resorted to sarcasm where the establishment was concerned.

No doubt one can only applaud the liberality of the ministers who wanted to surround these publications with such great luxury; they will certainly be glorious monuments of their love for the sciences. In a century or two, and even perhaps earlier, these works will be the only trace left to recall with some degree of respect the advancement of these men to power. Besides, these expenses, however considerable they may be, are far from being comparable to so many others which have had such futile and shameful motives. The sums granted for the publication of the combined voyages of the Uranie, the Coquille and the Astrolabe, will always be a very small compared to the millions lavished on so many ridiculous ceremonies, and consumed in supplying the state with a multitude of useless sinecures.

Things have obviously not changed very much in the ways that governments operate in the last two hundred years.

However, these same ministers, by restricting their patronage to these expensive publications, have not yet completely fulfilled the objectives of science and the wishes of the nation; they should have obliged the captains to immediately give the public an account of their voyages in a modest format, at a price that would have been accessible to all classes of society. These small editions would have become popular; all those who had taken some interest in the voyage in question could have satisfied their curiosity, and we would then have waited with more patience for the deluxe edition, where each part of the science would have been treated, ex professo, with all the appropriate development, and accompanied by the appropriate atlases to give it the greatest possible interest. Such was the project that I presented on my return, for the publication of the voyage of the Astrolabe, to the minister who then directed the department of the navy. He first gave his assent to it, then circumstances independent of my wishes opposed its execution.

It is a pity that Durville did not list those circumstances, but at this point he perhaps remembered where he was, and what he was there for, and brought his ‘introduction’ to a close.

Perhaps, gentlemen, some members of the commission will feel that I am departing from the subject of my paper, but I think that the opinion that I am stating is far from irrelevant to the progress of the science to which you have dedicated your endeavours. Reprinted in your Bulletin, if it ever comes before the eyes of those who dispose of the resources of the state, it might perhaps have a useful effect on their deliberations. I will now return to the voyage of Captain Beechey.

It is possible that, having so roundly condemned the whole of the French naval establishment, Durville decided that he should not, perhaps, upset absolutely everyone. At any rate, he briefly turned his fire on his predecessors as expedition commanders and decided to except at least one of the members of the establishment from his general condemnation

In the introduction [to Beechey’s book] we were pleased to find the instructions which this navigator received from the Lords-Commissioners of the Admiralty. It was thus that the most illustrious navigators Cook, Vancouver, Lapérouse, d’Entrecasteaux, etc., had acted. We must regret that MM. Freycinet and Duperrey did not follow this example; we must regret it all the more, as their instructions had been drawn up by M. de Rossel, that worthy successor of the Bordas, the Fleurieu, etc., and the last of those who really deserved the title of hydrographer in France, by his enlightened criticism and the extent of his knowledge in this important branch of geography.

It might be thought that this piece of flattery was included in order to ensure Darville’s command of a second voyage with the Astrolabe, a voyage that happened and which took him to the fringes of Antarctica, but that is an unworthy suspicion. Rossel had died two years earlier.