The gallant governor of Dili

If the length of time the Uranie spent in a port is compared with the amount of space Rose gives to the visit in her diary or letters, then there is one stand-out item. The period between 16:45 in the afternoon of 17 November 1818, when the Uranie arrived off Dili, in today’s Timor Leste, and 11:20 in the morning of 22 November, when it left the area, received a quite disproportionate degree of attention, and for that the credit must go to the Portuguese governor, Don José Pinto Alcoforado de Azevedo e Sousa. For the Freycinet couple and for those of the officers of the Uranie who were not involved either in the very necessary re-provisioning or suffering from dysentery or malaria (the assistant surgeon, Joseph-Paul Gaimard being one of the latter), it was party time. The visit was also the origin of the picture that has come to symbolise the voyage as a whole, showing Rose in her ‘light muslin’ coming ashore to be greeted by Don José, with one of the Uranie’s officers is upended in the boat behind her. 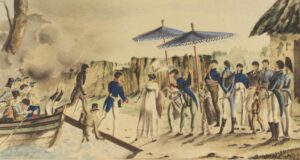 Don José was not, however, just a party animal. He seems to have been one of the best governors the colony ever had, and was in office at a particularly difficult time, but despite this we do not even know when he was born (possibly in the tiny village of Cedovim in the municipality of Trancoso in northern inland of Portugal, His brother Gil was definitely born there) ). In a letter to her mother Rose noted that he “proved to us, by a minuet that he danced with one of these ladies, that in his youth he must have been a very good dancer”, but that does not imply any great age. To a twenty-four-year old even someone of around forty, as Don José most probably was, can seem well past the days of his youth.

Whether old or not, Don José had had an interesting career. He first comes to be of interest to historians when he is serving as an artillery captain in Macau in the early 1800s, at a time when the Qing dynasty was beginning its long decline. The Qing were never really happy at sea (their origins lay in the steppes of Manchuria), and they proved themselves incapable of dealing with the pirates who plagued the Pearl River delta. Historically, these much more skilful seamen had limited themselves to predation on Chinese shipping and had left the heavily armed East Indiamen of the European powers very much alone, but in 1805 a powerful confederation controlling some six hundred war junks began to attack Portuguese vessels in the vicinity of Macau.

It was not a good idea. Portuguese power may have been declining throughout the Far East, but the country still had teeth. Skirmishing, with losses on both sides, came to a head in September 1809, when three Portuguese warships scattered a fleet consisting of some 200 junks. In command of one of these ships, the 16-gun brig Princesa Carlota, was Don José Pinto Alcoforado de Azevedo e Sousa. 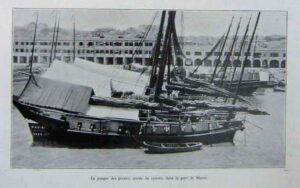 Figure 2. Pirate war junks or ‘taós’ in the inner harbour of Macau after their capture by the Portuguese.

A second encounter took place a month later, with much stronger forces on both sides. The Portuguese squadron consisted of six ships under Don José’s overall command in the Inconquistável (Invincible), a twenty-six gun frigate with a crew of 160. Again, the pirates lost heavily, thanks certainly to the superiority of the canon, explosive shells and smaller firearms used by the Portuguese, but probably also to the tactical skills of the Portuguese commander.  Don José retained command for the final battles, which took place in December 1809 and January 1810. near Lantau Island, now the site of Hong Kong’s international airport. The pirate admiral, Cheung Po Tsai (Zhāng Bǎozǎi), had reportedly assembled a force of 300 ships, 1500 cannon and 20,000 men, but their very numbers led to confusion and ultimate defeat. Following the sinking of the largest of the pirate ships, a vessel described as a ‘floating pagoda, the remnants retreated up the Hiang San River, where they were blockaded by Don José for two weeks before finally seeking terms. 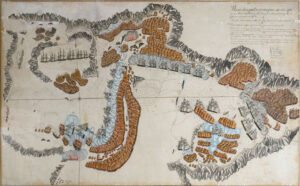 Figure 3. The Battle of the Tiger’s Mouth, the final battle in the conflict between the Portuguese in Macau and the pirates of the Pearl River.

It was at this point that Don José showed that he possessed diplomatic as well as military skill. Going in a small dinghy into the middle of the pirate fleet, he negotiated the beginnings of an agreement under which Cheung Po Tsai agreed to integrate his forces into the Qing navy. When the treaty was signed, on 21 February 1810, Don José’s work in Macau was complete, and on the 17th of December 1811 he was promoted to the rank of lieutenant colonel and appointed governor of the Portuguese possessions in the Lesser Sunda Islands, of which the Portuguese part of Timor was by far the most important.

Don José’s time in Timor is much less well documented than his time in Macau, but there is much to be gleaned, despite the many questions posed, by the documents held in Lisbon and listed in the Catálogo de Documentos Manuscritos Avulsos Referentes a Timor Existentes no Arquivo Histórico Ultramarino (Catalogues of individual manuscript documents referencing Timor in the Overseas History Archives, hereafter referred to as the Catálogo).  His first mention is in Document 165, dated 17 December 1811, which records his appointment as “Governor and Captain General of the islands of Timor and Solor”, but Document 167, dated 22 March 1812, Document 168, dated 28 July 1812, and Document 169, dated 1 January 1812, show his predecessor, Capitão de Mar e Guerra[1] Vitorino Freire da Cunha Gusmão, still in place. It was not until Document 170, dated 12 January 1812, that Don José was himself writing as governor. Wisely, and probably remembering previous tangles with Portuguese bureaucracy, he remained for several years in Macau in order to negotiate an improved salary for himself and better support for the province he was about to govern. It was not until 18 November 1815 that his letters were being sent from Dili rather than Macau but, despite being therefore an almost unknown quantity in his new domains, several of its ‘kings’[2] had written to the Prince Regent in Brazil during the intervening period formally requesting that his predecessor should never again be appointed to a post in the Sunda Isles (Document 181, dated 15 September 1815).

When Don José did get to Dili, he found the colony under pressure, and much of his time was spent in attempts to counter Dutch encroachment. Hazaart, the Dutch mestizo governor of Kupang, had already occupied Atapupu, leapfrogging past Portuguese Oecussi, and was threatening, and at one stage occupying, Batugade. This was the situation encountered by Rose and Louis in late 1818 and, somewhat bizarrely, it is they who provide the most accessible descriptions it. Pages 521 to 546 of the first volume of the Historique are devoted to a history of Timor which becomes more detailed as it approaches the time of the Uranie’s visit, and Rose’s accounts provide insights into the lives of the Dutch and Portuguese rulers, although very few into those of their subjects.

Figure 4.The entry in the Catálogo covering the end of Don José’s period as governor and the beginning of the governorship of Manuel Gois. In translation the entries read:

203 1817 [POS] OFFICIAL LETTER (copy) from the Governor and Captain General of the islands of Timor and Solor, José Pinto Alcoforado de Azevedo e Sousa to the Secretary of State for the Navy and the Ultramar, Count of Arcos, D. Marcos de Noronha e Brito, on the promotion of José Hornay and Domingos da Cruz to the ranks of lieutenant colonel and brigadier, and the awarding of the decoration with the Order of Christ. Complaints and discontent of the population of the islands of Timor and Solor against the former governor Vitorino Freire da Cunha Gusmao. Death of the Bishop’s governor, Friar José da Anunciação. Conditions of obedience and fidelity to the crown of Portugal of the Mauber kingdom in the province of Belos. 2 pages Incomplete document. AHU_CU_083,Cx.4,D.180

As far as the documents listed in the Catálogo are concerned, there is a mystery. The last mention of Don José is Document 203, a fragment of a report written by him on a number of unrelated topics at some time in 1817. The following Document 204, dated 1 July 1818, records the appointment of Manuel Joaquim de Matos Góis as governor, but we know from the Uranie records that Don José was fully in control, full of energy and in seemingly robust good health in November 1818.  It would be understandable for these appointments to be made well in advance, givien the time needed for the new governor to prepare himself and to make his way to Timor (from Goa, in this case), and this could be seen merely as a repetition of the pattern when Don José was appointed were it not for the absence of any hint in what Rose had to say about her visit to suggest that he knew that he was being replaced. Indeed, he took some pride in showing her the place where he intended to build a new residence. It may, from her description, be where the Palácio do Governo was built many years later.

Hans Hägerdal records that Don José died in office in 1820 and that he was succeeded, not by Gois but by ‘interim juntas’, comprising António Caetano Diniz, Padre Bartolomeu Pereira, and Dom Gregório Rodrigues Pereira of Motael in 1820 and António Caetano Diniz and Padre Bartolomeu Pereira in 1820-1821. The first official letter that Góis wrote from Dili was dated 16 May 1821. Given that governors were normally appointed for (often renewed) three year stints, it seems that interregnums could last almost as long as tenures.

Clearly, I have much yet to learn about Don José from documents listed in the Catálogo, none of which have yet been accessed. This is very much ‘work in progress’

[1] Capitão de Mar e Guerra: a naval rank equivalent to a colonel in the army.