One of the reasons that Ayn Rand was as successful as she became was that she very clearly identified a problem with government that has only got worse in the years since she wrote ‘Atlas Shrugged’. That problem is cronyism, a far too close association between government and business, typified in the UK by the establishment of an illegal fast track for favoured businesses seeking for government contracts for enormously profitable work related to the Covid-19 pandemic.

When, in 1953, Charles Wilson made his memorable, and usually misquoted, remark that “what was good for our country was good for General Motors, and vice versa”, he was at least speaking as a representative of an industry that had been astoundingly successful in rising to the national emergency of the Second World War and delivering what was needed for eventual victory. In the UK also, industry had stepped up to the mark, and it had been collaboration between business and government that had ensured the country’s survival. It had been government that had issued Specification F.5/34 that defined the RAF’s need for a step-change in fighter design, but it had been the Hawker and Supermarine companies that had delivered. Wartime success, however, contained the seeds of peace-time disaster, a disaster that Eisenhower foresaw in 1961 in his farewell presidential address. What he said then was :

“In the councils of government, we must guard against the acquisition of unwarranted influence, whether sought or unsought, by the military-industrial complex. The potential for the disastrous rise of misplaced power exists and will persist.”

All too true, but what Eisenhower perhaps did not foresee was the extent to which that association between government and one section of industry would morph into a far too close association between government and industry as a whole. And not just businesses with proven records of competence, but businesses with proven levels of incompetence, or no records of competence at all. This is very much the ‘Atlas Shrugged’ scenario, with the formerly successful Taggart rail company in the inheriting hands of the politically adept but otherwise incompetent James Taggart, and with other government cronies with no redeeming features whatsoever circling over the mortally-wounded remnants of all other successful companies. Come a national disaster, whether a war or, as today, a pandemic, and the opportunities for the friends of government to make money are seized upon with no sense of shame, even when it turns out that the government  is acting illegally. 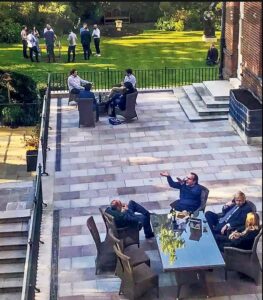 One of the numerous parties, and by all accounts one of the more decorous, held in 10 Downing St and its garden during Covid-19 lockdown. Ironically, it is pictures like this, and the events surrounding them, that seem most likely to bring down the Johnson premiership. His reliance on government by crony and his contempt for democratic norms, as demonstrated by the Owen Patterson affair, seem to have been factored in by those who elected him. Nor have his plans to limit oversight of government actions generated equivalent outrage.

So, must it be conceded that Rand was right after all?

Not really. There is nothing unique about her excoriation of cronyism. Recognition of it as a problem, in any government, at any level, is a given in any study of political systems. Her right to be considered a serious thinker has to rest on her identifications of the path to a crony state and, more importantly, a path to a solution. On both counts, she failed.

The defining of the path to a crony state? For Rand the root cause of everything wrong with the world was an excess of altruism –  indeed, for her any altruism at all was excessive. Which rather ignored the fact that the only governments that have come to power proclaiming altruistic principles have been ones that have seized that power by force. Robespierre may have proclaimed Liberty, Equality and Fraternity, but that was at the start of the French revolution’s reign of terror. A hundred and thirty years later, the Russian version of the supposedly altruistic communist state imposed itself at gunpoint. Neither, of course, lived up to any  altruistic ideals; revolutions eat their children. On the other hand, the great and quite successful experiment in democratic altruism in the UK in 1945 foundered because, in the end, the electorate rejected the idea in favour of non-altruistic Thatcherism. The path by which the United States was plunging into crony-fuelled disaster in ‘Atlas Shrugged was simply not a plausible one.

Far more important than Rand’s shaky grasp of history, however, is the absence in what she wrote of any workable solution to the crony problem. In her ideal state, every individual would act exclusively in their own self-interest. The guiding principle would be the one she put into the mouth of John Galt. I SWEAR BY MY LIFE AND MY LOVE OF IT THAT I WILL NEVER LIVE FOR THE SAKE OF ANOTHER MAN …… modified only by the rider ….. NOR ASK ANOTHER MAN TO LIVE FOR MINE. It is in that second part that there lies the problem, because even Rand had to acknowledge that far more people were likely to opt to adopt the first part of that statement as their personal philosophy than would also adopt the second part. Regardless of John Galt, or Ayn Rand, there would still be people who would cheat, lie and steal. To cope with those, she had to admit the necessity of a legal system, a police force to back it up and an army to protect it from outside interference. She had to admit the necessity for a state.

It was, of course, to be a very limited state. ‘Atlas Shrugged’ ends with judge Narragensett at his desk, writing a new amendment to the US constitution.