Ayn Rand believed that governments are, by their very nature, corrupt. Many people would agree that, in that respect at least, she had a point. As far as UK politics are concerned, the events of early November 2021 would certainly support that view.

A former cabinet minister is being paid £100,000 a year by one company and £12,000 a year by another for ‘advice’, while still a member of parliament, sitting on the government benches.

During the period in which he was being paid those sums, he is said to have repeatedly lobbied various government departments on behalf of those companies (one of the few things that is expressly forbidden to MPs who take on consultancies).

When the Parliamentary Commissioner for Standards investigated this and reported to the cross-party Committee on Standards, which has members who are not MPs, that the rules had been broken, the committee decided that this merited his suspension as an MP.  For a period of no fewer than 30 days!

When this news reached the prime minister, an amendment was put before the House of Commons to change the entire system and specifically to cancel the suspension of the member in question. This motion was accompanied by a three-line whip, something that, in the arcane workings of the House of Commons, informs the government’s supporters that if they decide not to vote in favour, they do so at their peril, and that it would be even more perilous to vote against. All but a handful of Conservative MPs dutifully fell into line. 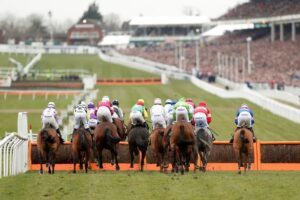 The Cheltenham Festival, a suspected super-spreader of COVID-19. The Mirror.  Image XO3810:

All this makes for a plot line that would not be out of place in the pages of ‘Atlas Shrugged’. Looked at more closely, the appearance of a tight little cabal is increased. The member concerned is a keen horseman and his wife, until her tragic death eighteen months ago, was the Jockey Club Racecourses’ first female chairman, closely involved with the Aintree racecourse, where the Grand National is held every year. The same company that is paying her husband £100,000 every year began to sponsor the National soon after she became chair. When the Covid-19 pandemic reached the UK that same company obtained, without competition, two lucrative contracts from the Ministry of Health. No doubt coincidentally, the then minister, Matthew Hancock, represents the Newmarket constituency where horse racing is the major industry, and himself once trained as a jockey, winning at least one race. When the need came to find a head for NHS Test and Trace, Hancock looked no further than his fellow racing enthusiasts. Dido Harding, a member of the main board of the Jockey Club which runs not only the Grand National but also the Cheltenham Festival was duly put in charge, despite a less than stellar record in business, especially where IT was concerned. Hancock was widely criticised when he decided that the first lockdown of the Covid-19 epidemic in the UK should not begin until after the end of the 2020 Cheltenham Festival. In his farewell address as President of the United States, Dwight D. Eisenhower warned of the peril to good government represented by an over-mighty military-industrial complex, but he clearly failed to recognise the danger represented by over-mighty horse racing.

So far, so reminiscent of the sort of politicians pilloried in ‘Atlas Shrugged’ but Ayn Rand’s personal demons presented her with a quandary. Her hatred of the communists who confiscated her father’s business and forced her family into poverty after the Russian revolution (but who also enabled her to go to university a few years later at the age of sixteen) was such that she had to identify her failed and corrupt ruling class of her novel with the far left. That meant that she had to graft a left-wing ideology on to the tribe of looters who were taking over the United States in her imagined world, and who are in so many ways reminiscent of Boris Johnson’s version of the United Kingdom’s Conservative Part,. It was never convincing. It was easy enough to assign the failure of every other country to its embrace of communism or socialism in the cause of that hated human characteristic, altruism, because she never had to describe their political systems in any detail, but the idea that the likes of Wesley Mouch and James Taggart were driven by altruism is simply ludicrous. What the government of the United Kingdom is now demonstrating is that, while venal and incompetent politicians, and politicians with massive senses of their own entitlement, are not unknown on the left, they are far more likely to be found on the populist right.