One of the criticisms faced by Ayn Rand in her lifetime was that her ‘rational men’, who were not merely intellectually brilliant and always right in their judgements but all god-like in their personal appearance, simply did not exist, and therefore, whatever the merits of her works as fiction (fiction being full of characters who could not possibly exist), they were worthless as ‘philosophy’. To this she had a standard answer.

“”I trust that no one will tell me that men such as I write about do not exist. I know they do. I married one. His name is Frank O’Connor. 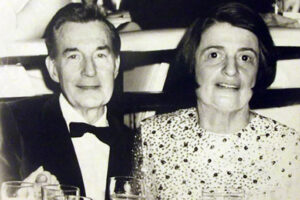 It has to be said that, if John Galt and his friends set the standard for rationality impossibly high, O’Connor sets the bar reassuringly low. The couple met when they were both working on a film set in Hollywood in the days of silent movies, she as an extra, he possibly with a very minor part. He never got any further as an actor, or very far in his other chosen career as a painter. If ever a man did not live up to John Galt’s dictum that “I swear by my life and my love of it that I will never live for the sake of another man, nor ask another man to live for mine”, it was Frank O’Connor. For much of his life he lived entirely for the sake of Ayn Rand.

So, if Rand’s chosen example seems less than satisfactory, can we look around us today and see someone who does make the very challenging grade. He must be very successful (Rand had no time for failures), and therefore very rich, a visionary, an entrepreneur, an inventor, a publicist, a man capable of taking over the airwaves (or their modern equivalent) of an entire continent or more.

Who, admittedly, has not tried to emulate Galt by taking over the entire US broadcasting system (or, at least, the radio part – film enthusiast Rand managed to ignore television in ‘Atlas Shrugged’) but he is such an enthusiast for Twitter that he is now engaged in an on – off – on again minuet around buying it. If it happens, it would guarantee him an even larger audience.

At the moment Musk seems to be everywhere. Not only is he contemplating buying Twitter, he is manufacturing electric cars on a mammoth scale, he is sending his acolytes into space, he is the richest man in the world. He is John Galt writ large, although Time, in its list of prototypes, didn’t mention Galt, preferring “a madcap hybrid of Thomas Edison, P.T. Barnum, Andrew Carnegie and Watchmen’s Doctor Manhattan, the brooding, blue-skinned man-god who invents electric cars and moves to Mars”.

What, however, Musk himself would not deny is his debt to the rest of inventive humanity. People may enthuse that for his Dragon spacecraft he “swept away old-school instrument panels and replaced them with three oversize touch screens”, (Time again) but I remember, at least 25 years back, being in the cockpit of a 747 on the KL to Jakarta leg (another story, that) and facing, not instrument panel but just – THREE SCREENS . And for all that he wrote of the government, on Twitter, in true John Galt vein, that “eventually, they run out of other people’s money, and then they come for you”,  he might, in Rand’s eyes,  himself be a good candidate for death in the Winston Tunnel. His companies have been supported by billions of US government dollars.

Which brings us back to Rand and her very shaky grasp on reality. Musk does not operate in a vacuum or, like Galt, within a small group of like-minded cronies hidden away in a valley in the Rockies, He operates in the real world, and relies on it far more than it relies on him. The world could manage without the Tesla electric vehicles, but could Tesla function without a vast network of electric charging points? Or of roads on which those cars would run? Is Tesla going to pay for those things? I don’t think so. Musk has succeeded phenomenally by looking at the market, understanding how it works and, yes, by taking enormous risks. But here, in “Atlas Shrugged” is Ellis Wyatt, standing by his new oil-shale development in that Rocky Mountain valley.

“Market? I now work for use, not for profit— my use, not the looters’ profit. Only those who add to my life, not those who devour it, are my market. Only those who produce, not those who consume, can ever be anybody’s market. I deal with the life-givers, not with the cannibals. If my oil takes less effort to produce, I ask less of the men to whom I trade it for the things I need. I add an extra span of time to their lives with every gallon of my oil that they burn. And since they’re men like me, they keep inventing faster ways to make the things they make— so every one of them grants me an added minute, hour or day with the bread I buy from them, with the clothes, the lumber, the metal”— he glanced at Galt— “an added year with every month of electricity I purchase. That’s our market and that’s how it works for us”

Given that Galt had invented a machine that sucked electricity out of the air for almost no cost at all, one might wonder why anyone would want to burn Wyatt’s oil at all, but Rand didn’t worry about that.

Musk is not Galt. Like him or loathe him, he lives in the real world, not some atavistic throwback to a village barter economy.