It being close to Christmas as I write, I began to think about how that was celebrated on board the Uranie. The fact is – hardly at all.

For Christmas 1817 the Uranie was in the roads of Rio de Janeiro, but as far as Rose de Freycinet, in her diary and in her letter to her mother, and Joseph Gaimard in his diary, were concerned, the day passed without any comment at all. Gaimard, who was conscientious about inserting dates, wrote

On the 22nd at six o’clock in the evening, there was heavy rain accompanied by thunder. On the 29th there were porpoises near the corvette. [Gaimard, p. 151].

On the 19th ………. there was a festival in the town and the king’s ships and the public buildings were illuminated. There were similar illuminations on the 21st. [Gaimard, p. 151].

Gaimard did not say what these festivities were, and he may not even have known. Celebrations in Rio usually revolved around dates significant for the royal family, in residence there after having left Portugal when Napoleon invaded the Iberian Peninsula.

By December 1818, the Uranie had reached Rawak (now Lawak), a small island just north of the larger island of Waigeo, itself just north of the Bird’s Head of New Guinea. This was the site selected for the measurements that had to be made as close to the equator as possible.  On this occasion the day was at least noticed, but otherwise everything continued as normal.

“On the 25th, Christmas Day, M. l’Abbé de Quélen celebrated mass at six in the morning. MM. Quoy and Duperrey made an excursion to Boni; M. Pellion and I went to Waigiou. At four o’clock in the afternoon the ship was visited by a pirogue crewed by five men, one of whom said that he was the owner of the huts on Rawak that we were occupying; they sold us a turtle for five knives. The same day we lowered one of our bathtubs into the sea.” [Gaimard, p. 334].

In 1819 even less note was taken of the day – it was the day on which the Uranie left Sydney, and there was far more concern about the day of the week than for the day of the year. Rose wrote to Caroline that:

We came on board on the 24th and it was not until the 25th, Christmas Day, that we set sail, after M. l’Abbé had said Mass. The English sailors could hardly believe they were seeing us leave on a Friday, because, they said, it was unlucky. [DuPlomb, p. 174]

Perhaps a little more notice should have been taken of those English superstitions, because the Uranie was headed for shipwreck in the Falklands. If she had delayed a day, she would probably never have entered the Bay of Good Success on Tierra del Fuego, where all their troubles began.

Celebrations that did take place

So was the Uranie a dull ship, on which there was no place for celebrations?

Not at all, it was just that different things were celebrated, and the officers had their own club to mark special days.

On 15 [August 1818], the festival of the corvette Uranie was announced by a whistle: our ship had been placed under the protection of the Virgin Mary when we left Toulon. We saw a ship, an enormous whale, and we caught several very large two-horned salps.

An Epicurean institution, proposed on August 10, was formally established: according to the statutes of our Society, each of us was required to solemnly celebrate two days of the year, at our choice. Those I adopted were July 22, the day of St Magdelaine, and January 31, my birthday. [Gaimard, p. 271]

Unfortunately, there is no indication of what happened at the society’s ‘celebrations’. It is hard to imagine any of the officers preparing a meal themselves, or the results passing epicurean muster if they did. Perhaps they were allowed the services of the captain’s cook on those occasions.

Gaimard was, in fact, unusual in celebrating his birthday, his ‘anniversaire de ma naissance’. More usually it was the fête, the name day or saint’s day, that was treated as special. A few days later one such day arrived, and was especially significant, because the captain of the Uranie and the King of France had the same names. In order to not have too much excitement in one day, Louis received the good wishes of the officers’ mess a little early:

At seven in the evening we paid a visit to our Commander on the occasion of his fête. Mr. Lamarche, the First Lieutenant, spoke and offered him the good wishes of the officers. M. de Freycinet replied that he saw us with pleasure and that he would demonstrate to us, during this voyage, the extent of his affection for us.

On 25 August we solemnized the feast day of our sovereign and the leader of our expedition. The sailors presented their greetings to the Commander, who welcomed them and told them of the rewards that awaited them at the end of the expedition. The crew was given double ration; in the evening dances took place on the forecastle. We saw a few petrels with black wings and white bodies. [Gaimard, p.273]

It all sounds quite decorous, but celebrations that involved only the lower deck were clearly a little less inhibited, and in a letter to her mother Rose described on such event that had fatal consequences.

A rather terrible thing happened on board yesterday: a good sailor, a man well-liked because he was both good company and skilful, was in the process of celebrating his feast-day, doubtless less by praying to St Peter, his patron saint, than by drinking toasts in his honour. So much was drunk that the unfortunate man fell through the foc’sle hatch on to the false deck and was killed. The worst thing is that this event may not have persuaded anyone but him of the danger of drinking too much. (FL676979]

Even that was not regarded as an unmitigated disaster, or perhaps the crews of sailing vessels in the early 19th Century were well practiced at extracting what crumbs of comfort they could from even the most distressing of circumstances. At any rate, they drew a rather different moral from the event than did Rose. Louis wrote of it:

On the 29th (of June 1819), one of our seamen, having drunk a little too much to celebrate his feast day, was killed by falling headlong from the upper deck. He was a Breton, and his name was Rio; he was a very good man, who was universally mourned; but everyone agreed that death was better for him; he was a spendthrift, heedless of his future, and having spent all the money he had earned during his frequent voyages, was destined for a most miserable old age. [Historique Volume 2 Part II: p517]

This was a period when, unless one was born rich, or was very careful, or very lucky, old age was likely to be neither comfortable nor pleasant. A quick death whilst happily drunk did not, to many, seem a bad option. 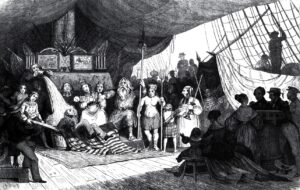 The ceremony of the crossing the line, as observed aboard a Nineteenth Century French warship. What is being shown is obviously similar to what took place on the Uranie in late 1818.

There was, of course, one event that took place during the voyage that was just as raucous and which involved the officers as well as the crew, and even Rose herself, and that was the ceremony of the Crossing of the Line. Occurring early in the voyage, en route to Rio, it may well have been the first clear sight the crew had of their captain’s lady. It went well.

On November 19, we crossed the line. As many of the crew had not yet done so, the customary ceremony was performed for the amusement of the crew.

The evening before, an envoy sent from the father of the line descended from the tops. His coming was preceded by thunder, hail, and heavy rain. The hail seemed to us manna much like that of our fathers in the desert, for we could have fed on it: it was nothing other than dry peas. The thunder sounded like the sound of the drum, and the rain was nothing but sea water.

This envoy brought a letter from the King of the Line that declared that the Uranie could not continue her journey unless all those who were not yet baptized underwent this ceremony at his hand. Louis gravely assured him that he would give orders that he was to be received the next day and that no one opposed his views.

A throne was indeed prepared early the next day for the king and his retinue, and beside it a seat for those who were to be baptized. At 10 o’clock the king of the line appeared, accompanied by his wife and daughter. I think that the two ugliest men on board had been deliberately chosen to fill these roles: they were hideous. The king was preceded by six servants and was followed by his chaplain, his minister and a few other personages. The devil, surrounded by 8 or 10 imps, came at the end of the procession: he was dressed in brown skin with an iron hook on his shoulder; the imps were quite naked, some painted red, others black and others had rubbed a sticky substance over their bodies and then rolled in chicken feathers.

As soon as the king was seated, he sent his servants to cut the Uranie’s rigging, but Louis, putting some gold coins in the hands of one of the ministers, begged the king to spare his ship. The servants were then recalled and the baptism of the infidels was carried out.

For a few napoleons I was almost entirely excused the ceremony.

Most of the officers having crossed the line before, only a few bought themselves out as I did. For those who couldn’t help themselves or who were less generous, the old man ordered that their faces should first be smeared with paint and then these unfortunates, seated on a movable chair, were thrown into a vat full of water, at the same time as a bucket was emptied over their heads. As for those who refused to take part in the ceremony, they were forcibly brought back and soaked all the more because of their resistance.

It lasted all morning. The king and his retinue, after parading twice around the ship, drank the double rations that Louis had granted.

We dined that day with the officers. They gave us a very enjoyable meal, very cheerful, and in the evening I watched the dances on the deck of the crew, who still wore their masks and did a thousand silly things. The weather, which for a long time had been rainy, was superb all day. [DuPlomb, pp. 19-21].

In the eyes of the crew, Rose had passed her first test, and whatever view might have been taken of her presence by the more traditionally-minded amongst them, naval discipline would have ensured that she was respected, however she performed. Later, marooned for almost three months in the Falklands, there would be little to protect her other than the respect that she and Louis had built up over the preceding two and a half years. It was to be enough.

But there remains the question posed in last month’s blog. Why was there no mention of this ceremony, which  was described in so much detail for Caroline de Nanteuil, in the copies of the letters Rose wrote to her mother?