When Louis de Freycinet took the corvette Uranie out of Apra Harbour on Guam and set sail for Hawaii, he headed north, not east. Even in 1819, sailors in the north Pacific knew that that was the quickest way to cross the ocean, however bizarre their route might look on the map. Had Louis chosen to go a little bit west of north, and hold that course a little bit longer before turning east, he might have visited the Bonin (Ogasawara) Islands, where he could have obtained some very surprising results with his pendulums and his naturalists would have found themselves with new opportunities in ‘the Galapagos of the North Pacific’, but would have had no chance of expanding their studies of human societies. ‘Bonin’ is a slight mispronunciation of the Japanese for ‘uninhabited’, which is what those remote and tiny islands were at the time.

There is a companion blog in the ‘Bouguer’ series on this site which explains why Louis might have been intrigued, and perhaps confused, by the results of his pendulum measurements, but it was to be another ten years before any such measurements were made. The work was then done by Russia’s Baltic-German sea captain Friedrich von Lütke (or Litke, if you are Russian, or Lutké if you are French), but when he arrived he found that the islands that were not totally deserted.Two British sailors were living on the largest of them, which had been recently been christened Peel Island but is now known as Chuchijima.

In the early 1800s the islands were well known to the captains of the whaling ships then operating in the North Pacific, as places where they could take on good, pure fresh water, but it is not clear when this practice began. Chuchijima was certainly visited in 1824 and again in 1825 by the American whaler Transit, and in September 1825 a British whaler, the Supply, called in and left physical proof of its visit in the form of an inscribed board nailed to a tree. The next year another British whaler, the William, arrived and the crew stayed long enough to decide to cut down at least one tree. It was a very bad idea, because the tree toppled over onto the captain, Thomas Younger, and killed him. Two weeks later the ship, sheltering in Port Lloyd (now Futami Bay) and presumably in less expert hands, was struck by a sudden squall, dragged its anchors and was wrecked on the rocky shore.

All the crew survived the wreck and, as was almost routine at the time, set about building a new boat from the remnants of the old, but before it could be completed the Timor, another whaler belonging to the same company, arrived and took off most of the castaways. There was, however, the William’s valuable cargo of spermaceti oil to be considered and two men, a bosun named Wittrein and a seaman named Petersen, were left behind to look after it, with the promise that they would be rescued in a year or so. However, before that could happen a British sloop of war, the Blossom, arrived under the command of Commander Frederick Beechey, who claimed the islands for the British crown. He might have justified his action on the grounds that all the inhabitants (both of them) were already British, but such niceties concerned no-one very much in those days. Instead, he wrote:

Taking possession of uninhabited islands is now a mere matter of form; still I could not allow so fair an opportunity to escape, and declared them to be the property of the British government by nailing a sheet of copper to a tree, with the necessary particulars engraved upon it. [Beechey, p516].

The date on the copper sheet was 14 June 1827. Having nailed it in place, Beechey left, leaving Wittrein and Petersen behind, at their own request. It is not clear whether they were still expecting rescue (and a suitable reward) from the company they worked for, or, as Lütke was later to suggest, they simply did not fancy serving time on a warship. By the standards of the early Eighteenth Century, life on Chuchijima may have seemed better than most of the alternatives. The climate was pleasant and there was plenty of food.  The sea was full of fish and, at some seasons, of turtles, and two pigs that had been on the William had reproduced themselves prodigiously. Nevertheless, when, on the 1st of May 1828, the Russian corvette Senyavin appeared off the island, they had had enough and were ready to leave. Lütke,  having recovered from having shot himself two months earlier while out hunting on Guam, went ashore to visit the castaways and make pendulum measurements, and he provided much more information on life on the island than did Beechey.

The next day we gave ourselves the pleasure of visiting the home of the new Robinson. We were met on the beach by the descendants of the companions in misery of these solitaries; an enormous herd of pigs, who had not received their usual food for twenty-four hours, surrounded us, and followed us everywhere. The home of our hosts was a house made of ship’s planks, with a porch covered with cloth bearing over the door the inscription “Charles Wittrein’s house”. A table, two hammocks, a chest, whose mahogany lid was the top of the captain’s table, rifles, a Bible, a volume of the “Encyclopédie britannique”, a few fishing instruments and two prints, formed the furnishing of this unique human habitation on the Bonin Islands. There was an adjoining little copper-covered shed next to a store and, a little further on, on a stove, two encrusted pots that were used to evaporate sea-water for salt; on the shore there were two canoes made of planks one inch thick, lined with copper; everywhere there was a mixture of misery and luxury; everywhere traces of the inventive genius that necessity inspires in man. Paths beaten in various directions led from the house to some resting places and small benches, which were at places where a watch could best be kept on the sea …… The pigs …… still served them as true companions, in spite of the generally accepted opinion that this animal is not likely to become attach to humans. Petersen had tamed a little pig absolutely like a little domestic spaniel; it slept with him and even sometimes danced. The pigs usually roamed freely; but, at the sound of a whistle they would run to the hut from all parts of the island. [Lütke, ‘Voyage Autour du Monde’ Volume II, pp 156-158]

Defoe’s novel Robinson Crusoe had been published more than 100 years previously, but it seems it was still widely read, even by Russian sea captains. 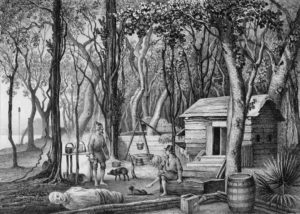 The first European settlement on the Bonin Islands, as seen by Kittrich, official artist to the Senyavin expedition. The carving in the foreground is unexplained. It might be the figurehead salvaged from the wreck of the William, or something the castaways had produced to pass the time while they waited for the rescue they had been promised.

Food, evidently, was not a problem, although there was some competition for it:

From the month of March to the month of October, turtles are plentiful in all the inlets: they leave at the end of autumn …… It is to be feared that pigs will drive the turtles away: their sense of smell, which is extremely good, allows them to find the holes in which the eggs are laid, and they eat them; so that the advantage of their presence will hardly compensate for the damage caused by their voracity. But it is more likely that the instinct of the turtles will cause them to settle on the neighbouring islands, which the pigs cannot reach. The turtles have another enemy in the crows, whose number is immense; when the eggs are laid, the crows are on hand to try to seize them. They even attack the pigs, often snatching the young, although they do not have the strength to carry them away. In a remarkable demonstration of instinct, the sows, knowing their enemy, retreat into the woods before giving birth and reappear only when their young are sufficiently large.[Lütke, Volume II, pp162-163]

Lütke stayed a little longer than he intended because his ship had sprung a leak and had to be repaired, but by the 15th of May he was gone, and the castaways with him. Wittrein went all the way back to London (where the Senyavin had to go because the pendulum had to be returned to its owners, the Board of Longiutde), but Petersen left the ship in Okhotsk and found employment with the Russian-American company. Sailors, then as now, were adaptable people.  After his return Lütke wrote a massive memoir of his journey, which was published in Russian and, as ‘Voyage Autour du Monde’, in French (my translations are based on this version), and in it he extolled the suitability of the island for colonisation.

I would be astonished if the English do not colonize these islands; otherwise the taking of possession which they have already executed would be entirely without object. This colony, important first of all for their whalers in the South Sea, would be even more so for their trade in China, legal and illegal. [Lütke, Volume II, pp164-165]

The illegal trade he was referring to was presumably in opium.

The British did, in fact, follow this advice, and in 1830 a permanent colony was established under the auspices of their representative in the Kingdom of Hawaii, with a strangely assorted group of colonists consisting of three Americans from Boston and another, less specifically, from ‘Massachusetts’, a Dane from Copenhagen, a man of Devon called Richard Millichamp, an ‘Austrian’ (with an Italian name) from Ragusa (Dubrovnik) and twenty anonymous Hawaiians, thirteen of them women. A year later they were visited by a British whaler, the Kent, whose surgeon, Thomas Beale, wrote a popular account of his experiences when he got back to London. Of his first encounter with the Bonin islands he wrote:

On the 5th of October 1831, made the Bonins, which form a small group of islands not far from the coast of Japan, in the longitude of 141° 30′ east, and in the latitude of 26° 30′ north. They were, at the time of our visit, all uninhabited except North Island, upon which two or three Europeans and a few Sandwich Islanders were endeavouring to form a settlement.[Beale p268]

North Island does not seem a very appropriate name for Chuchijima, but there can be no doubt that the reference is to the ‘British’ colony, because a little later

….. we visited the grave of Captain Younger, who was killed by the falling of a tree while on this island, which misfortune was quickly followed by the total wreck of his ship, on the rocks not far distant from the spot at which, only a few days before, he had been interred. While there, three of us entered into the spirit of a wild-pig hunt, which was amusing and romantic enough in these desolate regions: many daring and curious feats were performed on that day, the particulars of which would fill a chapter, but I can only state that we captured three fine boars. [Beale, p353]

Beale also visited ‘South Island’, and nearly lost his life there, in a battle with a storm that he described in graphic detail over fourteen pages of narrative.

With Millichamp providing the only English element, by the middle of the century the Peel Island colony was generally regarded as American. Twenty-five years later Japan reasserted a longstanding claim, and sent its own colonists, but instead of evicting those who were already there, they granted them citizenship. Their descendants remain, in the form of a tiny element in the still remarkably homogeneous Japanese gene pool.