In 2012 the State Library of Western Australia acquired at auction the first volume of the manuscript diary of Joseph-Paul Gaimard, junior surgeon on the corvette l’Uranie during a scientific voyage that began in September 1817 and ended in shipwreck in the Falklands in March 1820. The diary is a historically important document for Western Australia because it contains a comprehensive personal account of the visit of the corvette to Shark Bay and the contacts between the members of the expedition and the indigenous population. It also includes one of the first accounts by Europeans of what it is like to be lost in the Australian bush, and how easily that can happen. However, it is much more than that. It covers roughly half the voyage, from the departure from Toulon to the departure from Guam. A full transcript in French by Sylvie Brassard is now available on the library’s web site, and the easier access that this has provided has also revealed some important facts about the way that Gaimard set about his task..

The dairy is contained in a large solidly-bound book of almost five hundred pages, and it begins with entries that were neither written by Gaimrd nor authored by him. When he joined the Uranie he was issued with a set of instructions defining his duties as a ship’s surgeon and listing the stores for which he and his senior colleague, Jean-René Quoy, would be responsible, The author of the instructions was Pierre-François Keraudren, the Chief Medical Officer of the Navy, and they were copied into Gaimard’s book by one of his clerks, who signed them on behalf of Keraudren on p. 49.

Gaimard’s diary, p.49. Example of the copperplate handwriting used to record Keraudren’s instructions. The clerk who wrote them out also signed them on Keraudren’s behalf.

It may have been a different clerk who wrote the inventory that followed, and he evidently did not do it very well, because on p. 65 Gaimard took over the task. In a note added on that page he stated that the previous sections were copied into the book by a clerk who had worked so negligently that from then on he would write everything himself. For the next sixty-six pages, however, what he did was copy material prepared by other people. 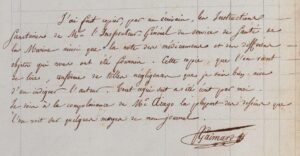 Gaimard’s diary, p.53..The note in which he complains about the accuracy of the copying done in Toulon

It was quite a bizarre mixture. After completing the inventory, which he did  on p.71, he copied in  a long letter from the Académie des Sciences defining the responsibilities of the two surgeons in their alternative roles as expedition naturalists (pp. 72 – 87), and a similar letter from the savants at the Jardin des Plantes (pp. 87 – 91). He then added a page of notes that had been sent to Faujas de St Fond, the geology professor at the Jardin des Plantes, by Joseph Charles Bailly, who had been mineralogist on the Naturaliste during the Baudin expedition and was therefore an obvious person to be consulted about the Uranie’s planned visit to Shark Bay. On p. 92 he began a copy of a letter to Keraudren from Charles-Louis Cadet, an illegitimate son of Louis XV who was adopted by the chemist Louis-Claude Cadet and who had, after his father’s death, decided to also become a chemist. He acted as pharmacist to Napoleon and continued his career without any appreciable break after the Bourbon restoration. The letter, which continues as far as p.100, is notable for a passage in which the object of the Uranie’s voyage is described as being “to compensate [France] for her losses and to fight successfully against the jealous, greedy and evil genius of her eternal enemy”. The enemy was not named, but presumably did not need to be!

It seems clear that in 1817 everybody who was anybody in the French scientific establishment was bombarding Louis de Freycinet with instructions and advice, and the next letter to be copied (pp. 100 – 105) was from Noël de la Morinière, an ichthyologist who was at the time Inspector-general of Fisheries. Only when this copy was complete was Louis himself allowed his turn. When in Tenerife he circulated a short letter to les Officiers composant l’Etat-Major de la Corvette, setting out what would be expected of them during the coming months (pp.105 – 108) but then, obviously realising that he was giving them far too much freedom, went to the other extreme and listed all of the five hundred and ninety-five (!) headings under which he required them to report their observations during the voyage (pp.108 – 131). After these two items had been  faithfully copied the diary proper starts on the next page, with the section on the Traversée de Toulon à Gibraltar.

And here is the problem. The first set of instructions was delivered to the recipients on the 23 of October 1817 in Sainte-Croix de Ténériffe, and the second, much longer, set ends with the statement that it was issued  in the harbour of Rio de Janeiro on 28 December 1817. The diary then begins with the departure of the Uranie from Toulon on 17 September 1817.

Gaimard was certainly not averse to inserting items in his diary at later dates, because on p.53 there are lists of medicines that were supplied to the ship during its visits to Port Louis (Mauritius), to New South Wales and its second visit to Rio, in August 1820, and it has to be assumed that he instructed the unsatisfactory clerk to leave a blank (but headed) page to allow him to do so. There is, however, no way that he could have anticipated in Toulon just how much space he would have to leave for a massive list of instructions that his captain was going to issue in Rio. It follows that the first part of his diary was either a copy from some other original or was written from memory.

Gaimard’s diary p.53. Page with headings written by a clerk but with information entered much later by Gaimard himself

There are a number of possibilities, but perhaps the most plausible is that Gaimard left Toulon with a bound book into which instructions and advice had been copied, and a supply of field notebooks. We know he had field notebooks because he records at one point having lost one of them in the swamps of Timor. The bigger book was not necessarily bound as it is now (it has marbled end papers, and even as monochrome, as these are, the technique did not become popular until about 1850) but it probably was a book and not just a pile of loose sheets. A start had been made by a clerk or clerks in Toulon in copying out the necessary instructions, but they had not been finished by the time the ship left (perhaps because Gaimard called a halt when he saw it was being badly done). While at sea on the first three legs of the journey (Toulon – Gibraltar – Tenerife – Rio) he may have kept his own personal diary in one of the smaller notebooks and carried on filling in the big book with items of the sort for which it was originally intended, including Louis’ letter sent to the état-major in Tenerife.

We do know that when he was in Rio and received Louis’ insanely detailed list of things to do, he copied that in as well, and it seems safe to suppose that when he had completed that task he realised that there would not be any more, or at least not anything major, to come: it was not really conceivable that Louis would have anything much to add.  It must have seemed wasteful to him to leave all those blank pages untouched, in the best book he had, so he decided to use it for his diary. He might then have copied previous entries from the smaller notebooks or written an account of the first part of the voyage from memory. It was most probably a bit of both, because there is detail in these sections that he could surely not have remembered (bearings on points ashore, for instance) but there is also material (such as the description of the Crossing the Line ‘ceremony’) that would have been out of place in the reports he passed to Louis.

Because the Gibraltar and Sainte Croix entries were written before the number system was set up, the ‘items for report’ for those places were copied in without numbers. The report written in Rio had those numbers, which Gaimard began copying for his diary, but he soon got bored and then just listed the headings under which reports had been made. At the foot of p.172 he wrote that “not having time to copy the other notes on Rio de Janeiro that I gave to the Commander, I will limit myself to a simple listing of the headings’, which does suggest that up to the time of departure from Rio he was writing out the notes required by Louis in notebooks and then copying them into his diary. From this point onwards he may have reversed the process and written everything except the field notes directly into the diary and then copied, or had the captain’s secretary, Gabert, copy, selected items out as notes for Louis. Viewing the diary as a whole, it is hard not to feel that in Rio Gaimard was really trying to be ultra-conscientious about the numbered listings, but became less and less enthusiastic as the voyage progressed. The diary might have been given to Gabert to copy on the grounds that surgeons had better things to do! 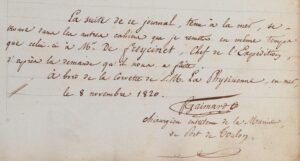 Gaimard’s diary, p.461. .Note added by Gaimard to the first volume of his journal, just before the arrival of the Physicienne in Cherbourg, recording his delivery of his complete diary to Louis.de Freycinet

The two methods would have had the same result in the end, with Louis in possession of everything. On p461 Gaimard recorded that just before the Uranie docked in Cherbourg he handed all his diaries over to Louis. How it was that the first volume later became separated from the others remains a mystery.