Thoughts on the Lairg gravity low

In 2008 Ken Amor and a group of his colleagues from Oxford and Aberdeen universities published a reinterpretation of the Stac Fada member of the Stoer Group sediments that outcrop on Stoer beach and in some other similar localities in the northwest of Scotland. Formerly regarded as a volcanic lahar or mud flow, Amor identified the deposit as a part of the ejecta blanket from a large impact event. The site of the actual impact was left as an open question, but in 2017 Michael Simms suggested that it should be identified with a significant gravity low centred on the town of Lairg, some 60km to the east of the outcrops. In 2019 Amor and a larger number of colleagues countered this idea by suggesting an impact site in the Minch, to the west rather than the east of the outcrops, and much closer to them. An unrepentant Simms responded, The two papers were published on-line by the Geological Society on 9 June 2019 and a summary of the arguments, written by Nola Tayloe Redd, appeared in the 12 July issue of Eos

For me the Eos article prompted two separate trips down memory lane. Many years ago, back in the days of paper sections and coloured pencils, I was part of a team interpreting a speculative seismic survey shot for JEBCO Seismic that covered the area in the Minch favoured by Amor and co. We saw nothing resembling an impact crater, but of course we were not looking at the 1100 Ma sedimentary section (if it existed). Our main problem was trying to see through the ~60 Ma basalt flows that blanketed much of the area. The JEBCO sections are presumably now amongst those being studied in Oxford.

Shortly after that exercise was completed, to the best of our abilities, I became a teacher, and for more years than I like to think I took UCL’s First Year geologists and geophysicists on their introduction to field mapping, usually to Assynt . We always spent a day at Stoer and I always (believing implicitly in everything said by my geological colleagues) told the students that the Stac Fada member was a lahar. The new interpretation surfaced just after I retired.

I wouldn’t presume to comment on whether it is the Sims group or the Amor group that is correct,. Neither of my two rather tangential brushes with the subject qualifies me to to do so, but one comment in the Eos summary did start a train of thought. It was that basing observations on the fortuitous location of a gravitational anomaly can be a bit tricky, because  “everybody knows gravity is inherently ambiguous”.

Well, yes, no-one could argue with that. Gravity anomalies are ambiguous in two distinct ways. First there is the ‘potential-field ambiguity; which says that any given anomaly could be produced by an infinity of different mass distributions.Secondly, there is the geological ambiguity, which says that even if we somehow managed to determine the mass distribution precisely, we might be no nearer deciding on the geological nature of those masses.

There are, however, still good reasons to look at gravity anomalies, because one thing that is subject to no ambiguity whatsoever is the fact that a gravity low indicates the presence  of a mass deficit. If the Lairg anomaly really does mark the impact site, then its location could scarcely be described as ‘fortuitous, and it is worth very much more than a second glance. Sims actually gives his readers two ‘glances’ at it, one a contour map restricted to the anomaly itself, the other in a map covering a wider area, processed to show ‘residual anomalies. Generous indeed, but I found myself wanting yet another map, one that covered a wider area and had undergone a minimum of processing. .Thanks to the far-sighted generosity of the British Geological Survey, which places all of  its gravity data on line, I was able to produce one of those for myself. 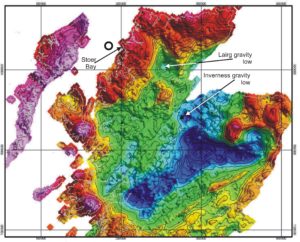 Bouguer gravity of the Scottish Highlands, based on data from the British Geological Survey. The open circle in the Minch marks the impact crater site favoured by Amor et al.

The Lairg gravity low is a long way from being the most prominent gravitational feature on this map, which covers almost all of the Scottish Highlands, but it is nonetheless very easy to see, and it bites into a strong down-to-the-southeast gravity gradient in a very interesting way. There is also a slightly smaller but very similar feature some sixty kilometres to the south, on the far side of the Great Glen Fault, which I have labelled the Inverness gravity low. These features certainly mark the locations of mass deficits, but what are the geological possibilities?

Many years ago in Sabah my research student, Robert Holt, mapped gravity lows associated with the enigmatic ‘circular basins’ that are such a feature of that  province, but the geology of Scotland does not suggest that such a basin, however formed, could be the source for either the Lairg or the Inverness low. Granitic intrusions are more promising candidates. Some of the individual granite stocks in Devon and Cornwall mapped gravitationally by Bott, Day and Masson-Smith many years ago have similar roughly circular shapes, similar areas and similar ~20 mGal amplitudes, and there are granite outcrops within the area of the Lairg low. However, the ’Cornubian’  anomalies are superimposed on a much more extensive low produced by the deep batholith, and there seems to be no parallel for that in the vicinity of Lairg, In Sims favour, on the other hand, is the fact that similar anomalies are associated with impact structures such as the Riess, but he does need a much larger impact.

Given my extreme ignorance of any of the geology of northern Scotland east of the Moine Thrust, I will take this no further, except to express the hope that the heightened interest in the area will somehow produce a definitive explanation for the Lairg (and perhaps also the Inverness) gravity lows.