The worker in Car 7

Having dealt with the crooked financier who made a fortune buying railway bonds, Ayn Rand turned her attention to the man in the next compartment. Seated in Seat 5, Car No.7 was a worker who believed that he had “a right” to a job, whether his employer wanted him or not. There is a touch of untypical realism here on Rand’s part. The worker had to be content with a seat, while the financier had a whole drawing room to himself. Even so, it is hard to feel much sympathy for this particular man. And yet …..

Rand was often light on detail, and in this case especially so. We do not know whether this man was looking for the work to which he felt he was entitled, or in a job and under threat of losing it. In the first case, was he alleging discrimination? In the second, a whole range of possibilities, and this is a good time to be considering them, because at this very moment the UK is under threat of being crippled by whole range of strikes. Rail strikes are already taking place, and one of the union’s worries is redundancy. Not the only worry, by any means, and others include rapid price inflation set against earnings stagnation and management demands for changes in working practices. The latter might, of course, be the reason for redundancies made in the name of efficiency, something that is always and with good reason seen by workers as shorthand for having them work harder for no more pay. To any outsider, the rights and wrongs of the dispute appear just about impenetrable; because the government/employer side and the union side seem to be talking about completely different situations rather than two aspects of the same situation.

What is clear, even from Rand’s very brief mention of him, is that the worker  in Car No 7 felt entitled to a job. Where could he have possibly got that idea?

Perhaps he worked on the railways, perhaps even for Taggart company. In which case he might well have noticed that, although his two ultimate bosses, James and Dagny Taggart, differed on almost everything, there was one thing on which they were agreed, which was that the fact that they had been born Taggarts entitled them to run the railway. Or perhaps he worked for the D’Anconia mining conglomerate, in which case he can hardly have failed to notice that Francisco D’Anconia felt himself entitled to complete control of the company, and even to destroy it if he so chose (as he did), thanks to the accident of birth. Or maybe he had worked in the industry that had built up around the wells operated by Wyatt Oil, symbiotically feeding off, and contributing to, its prosperity, and knew that the flame he had seen just as he entered the tunnel had testified to Ellis Wyatt’s belief that he was entitled to destroy a resource that had been millions of years in the making, because he had been the first person to discover it.[1] His farewell note said that he was leaving the reservoir as he found it, but that was a lie. He set fire to it as he left.

At the root of it all, however, is a very simple question: what are the obligations of employers to their employees? To this simple question Ayn Rand supplied a simple answer. Virtually none. The leader of the UK rail union, the RMT, has argued very powerfully against this view, but he is going to find little sympathy for that view from the person who, quite unbelievably, is now our prime minister. Liz Truss was one of the authors of a book cum political pamphlet with the title “Britannia Unchained”, in which it was stated that “once they enter the workplace, the British are among the worst idlers in the world”. When confronted with that quote during her leadership election campaign she denied believing it, blaming it on a co-author, but her colleagues tell a different story; each paragraph, they say, was endorsed by them all (including, presumably, her co-author Kwasi Kwarteng, whom she has just appointed Chancellor of the Exchequer). What is more, during her more recent stint as Chief Secretary to the Treasury she doubled down on that view, saying that British workers’ “mindset and attitude” were partly to blame for them producing less per hour than their foreign counterparts and suggesting they needed “more graft”. When challenged on that point during the leadership contest she back-tracked somewhat, focussing on “productivity” instead, but her lieutenant and chief cheerleader, and now her business, energy and industrial strategy secretary, Jacob Rees-Mogg, defended her remarks as ”sensible’. 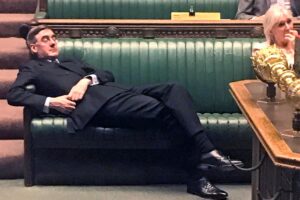 Jacob Rees-Mogg at his place of work. Photo, Times Newspapers

As the illustration shows, Mogg does indeed know something about British idleness in the workplace. However, it is interesting that both he and Truss now concentrate on productivity. It appears that in Mogg’s view that equates with sitting at a desk (presumably in preference to lying on a padded bench) at specific times, but is it really that simple? How, for instance, do we compare the productivity of, say, a delivery driver working near my home in Powys, who might well have to drive for twenty minutes between drop-off points, with that of his colleague in Cardiff serving addresses involving more parcels than he can carry, all within the same street? Or a teacher in a state secondary school with a teacher-to-pupil ratio of 16.7 to 1 with a teacher at Eton , with a ratio of 8 to 1. Is it not time Eton did something to improve productivity?

Confronted with that conundrum, I turned to the Internet to discover how productivity is measured, and discovered that economists despair of doing so where individual workers are concerned. What is generally looked at is the output (measured, wherever possible, in terms of profit) per worker, in an entire organisation.  Which places, of course, most of the onus for profitability not on the workers but on the managers.

[1] I have spent my whole working life, one way or another, as an exploration geophysicist, so I do not underestimate the skill and dedication that gave Wyatt his discovery. Or the role that sheer blind luck might also have played. But I also note that Wyatt’s father had been in the business, running stripper wells in the area where Wyatt made his discovery. He had a head start.