More airmag history – and a bit of interpretation

Recently, while I was  transferring books between houses, I came upon something I had completely forgotten about.  Perhaps almost everyone else has too. It was a report on an aeromagnetic survey carried out over eastern Papua and large parts of the offshore area to the north in a number of stages, more than fifty years ago.

The area covered was quite large, and the high chain of the Owen Stanley Mountains would even now be a challenge to any airborne survey that was also is going to include a considerable areas at or close to seal level. That can be admitted, but the survey was supposed to start in 1967 and it was not until 1973 that the final report appeared. Why did it take so long?

I was not directly involved but I certainly saw the start of the saga, because in 1967 and 1968 I was doing gravity surveys in Papua New Guinea, and during much of that time there was a B-17 Flying Fortress parked on the tarmac at Jackson’s, the airport for Port Moresby. It remained there, unmoving, for so long that people thought it was a war memorial. But it wasn’t. The Bureau of Mineral Resources had let the contract for the work to the French geophysical company CGG, and they had borrowed from the French Institut Geographique Nationale one of the B17s they had modified for aeromagnetic work.

One of the B-17s used by Institut Geographique Nationale of France for aeromagnetic surveys in the 1960s. This particular aircraft, which may or may not be the one that flew the Gulf of Papua, came to a sorry end in 1989 whilst starring in David Puttnam’s film reconstructing the final mission of the Eighth Air Force’s B-17F Memphis Belle. Something went wrong on a take-off during filming at RAF Binbrook, Lincolnshire, and she was very comprehensively written off, because the non-fatal accident was followed by a fire. Fortunately, no-one was hurt. Photo Key Collection

Unfortunately for the progress of geophysics, CGG had not checked with Australia’s Department of Civil Aviation as to whether this was an acceptable aircraft, and the DCA took one look and grounded it. Grounded it remained, as month followed month, although it did eventually get to fly the Papuan Basin and the more westerly parts of the Papuan Ultramafic Belt. For the remainder, it was back to a DC-3, but not the BMR’s own VH-MIN, which had been retired shortly before the second-phase flying began, but VH-PWM, owned and operated by East West Airlines.

The separate East Papua contract, which was part of Jack Thompson’s final legacy to the BMR, the Eastern Papua Project, took time to prepare, and Jack had left the BMR, and his project was pretty well complete in all its other aspects, before the first flight took place, in November 1969. To cope with the marine and almost marine areas on the one hand, and the Owen Stanley Ranges on the other, the survey was to be divided into two parts, flown at very different altitudes. There was a Panel 1-A to be flown at a barometric altitude of 15,000 ft and a Panel 1-B at a barometric altitude of 8000 ft. Because of bad weather, only the (not entirely) low-level Panel 1-B was actually flown in 1969, and Panel 1-A was not completed until May 1971. Only then could data processing, much of which was still being done by hand, be begun. 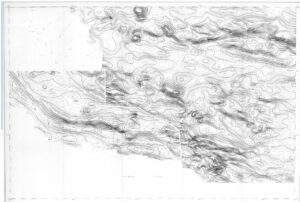 Meanwhile, dramatic changes were taking place in Papua New Guinea itself. When the Eastern Papua Project began, the Australian Territory of Papua New Guinea, known as TPNG, was still very much a colony. Independence, at least in the eyes of many of the Australians living there, was still an unimaginably long way off. Then, suddenly, everything changed, and in1973 the country entered on two years of ‘full internal self-government’. Complete independence arrived in 1975, by which time most of the Australians who had had formed the core of the civil service had packed their bags and headed south. The Geological Office in Port Moresby, still staffed at professional levels almost entirely by expatriates, continued to function, and function well, as the Geological Survey of Papua New Guinea, but resources were limited and the back-up from Canberra was being steadily reduced. It was not a good time for a geophysical report to find an audience when it concerned an aeromagnetic survey of an area where most access was still either by foot or helicopter. For three months in 1974 I was “filling in” as the one and only GSPNG geophysicist, but much of that period was spent investigating landslips on the Highlands Highway and doing gravity survey on the Marum ophiolite. I did manage to insert brief notes on the aeromagnetics into some of the Explanatory Notes for the 1:250,000 series geological maps, including the one for the Tufi-Cape Nelson area, but serious detailed interpretation was never an option.

I have not been able to find an evidence of all that tortuously acquired data ever having been looked at since. 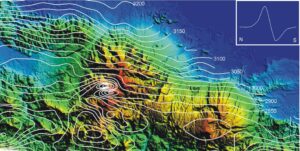 Figure 3. Aeromagnetic contours at 25 nT intervals, superimposed on the topography of the Suckling-Dayman Dome and the surrounding area. The inset shows a constructed N-S profile across the Suckling magnetic anomaly, just east of the map centre. Area flown at a constant barometric altitude of 15,000 ft.

Now, more than fifty years later, would there be any point in looking at this ‘legacy’ data?

Given that nothing similar seems to have been done since, there almost certainly would be.

In fact, one anomaly, on the Tufi sheet, almost jumps off the magnetic mapt. The Suckling-Dayman dome, an E-W elongated uplift, is still something of a mystery structure, and the relationship between the Suckling and Dayman segments is unclear. What Figure 3 does show is that the differences in surface expression have deep origins. Magnetically speaking, very little is happening in the Dayman sector, but there is a prominent anomaly just north of Mt Suckling itself, with a tight magnetic high to the north and an almost equally tight magnetic low to the south (profile in inset, Figure 3). The anomaly cannot be attributed to topography, and the slightly higher amplitude of the positive suggest the source is a near-vertical pipe-like body with magnetisation along it length. Suckling is not a volcano, but the magnetic map is telling us that there is an intrusive complex in that area, which is absent further east.