At the beginning of December, someone from the South Australia Department of Energy and Mining posted this historical note on LinkedIn:

Aeromagnetic surveys are a geophysical aerial surveying technique used to assist in the production of geological maps and mineral exploration. A magnetometer is fitted on board or towed behind an aircraft which will typically fly in a grid like pattern. The instrument records the intensity of the magnetic field of the Earth which can help identify some mineral deposits, like iron ore.

These photos take us back to 1958 when the Bureau of Mineral Resources (now known as Geoscience Australia) would conduct aeromagnetic surveys over South Australia. This aircraft known as the BUR mapped the magnetic field around Ceduna with a tail boom. We can see the instrument layout that would be typically seen on board a geophysical exploration plane like this. 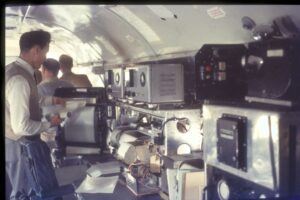 Figure 1. The interior of VH-BUR in 1958. The main chart recorder is just being reloaded. Aircraft height above ground level was output to a second, smaller, recorder that also required manual annotation for cross-referencing to the camera fiducial system. Photo John Webb via SADME

The post was accompanied by two photographs, one showing the DC-3 VH-BUR in all her glory, the other (Figure 1) her interior, in all its squalor. Both were taken by John Webb in 1958.

Primitive analog days, but good enough for the likes of Olympic Dam and Elura (Endeavour) in the 70s.

True in part, but there is so much more to be said.

VH-BUR was indeed a pioneer. She received that registration in January 1951 when, not quite seven years old, she was purchased by the Bureau of Mineral Resources (BMR). Immediately John Newman, Australia’s great pioneer of airborne geophysics, set to work to install a modified anti-submarine warfare magnetometer in a tail boom, but those were the days when the search for uranium was at its height and she also often carried a scintillometer. Three years later, she was joined by a sister ship, inevitably registered VH-MIN (VH-RES, a single-engined Auster, came to the BMR brand new at about the same time). After nine hard years, BUR was sold on, and I never knew her, but MIN had still eight years of survey life ahead of her when I joined the BMR in the Australian spring of 1962. 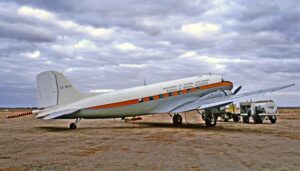 Figure 2. VH-MIN in her natural environment, out in the bush. Colour photo taken by Neil Follett at Whyalla, South Australia in 1965.

Those were, as the man said, analog days, and it is worth remembering what that involved. There was not just a mass of instrumentation in the aircraft (Figure 1) but also in the tail boom. The function of the latter was to get the sensor as far away as possible from the magnetic fields associated with the aircraft (but still not far enough), and that sensor was a (very analog) gimbal-mounted three-component fluxgate magnetometer. Any measurable magnetic field through two of the component units caused re-orientation, so that the third unit measured total field. Complicated enough, but the real curse of the fluxgate was drift. The properties of the sensors changed with time and (principally) temperature, and we began flying at first light**, to take advantage of the cool and absence of thermals that, at a height above ground of something around a thousand foot, threw the old lady all over the sky by mid-morning, so temperature changed a lot. Tie lines were a necessity to allow corrections to be made for drift, and that placed extra demands on the positioning systems, because the places where ties and flight lines crossed had to be very accurately located.

No GPS in those days, of course. Navigation was by compass and by sight, using photo-mosaics, marked up the night before with lines showing where the aircraft was supposed to go. There was a downward pointing camera recording an image of the ground below on a continuous strip of 35 mm film through a hole in the floor, and the film had to be unloaded after every flight, developed, hung out to dry and then plotted on the mosaics, because we had to know almost immediately where the aircraft had actually gone, so that any gaps could be infilled before we left the area. It took some time to acquire the skills involved in comparing the distorted negative image on the film with the positive images on the mosaics (was this pattern of four trees in line and one off to the left this set of five trees, or that set of five trees?).  The image was distorted because although in principle the film tracked through the camera at the same speed as the image of the ground below, it was never exactly right, especially with cross-winds taking the ship sideways.

Perhaps two hundred and seventy miles out and two hundred and seventy miles back, on a hopefully parallel line two or four miles to the north or south, and that was a day’s work for the pilots but for others the work was just beginning. Pen and ink charts to be extracted from the recorders (which of course had to be reloaded, ready for the next day), and then related to the flight lines plotted from the strip film. Another source of possible error. As well as photographing the ground, the camera would photograph, every two seconds, a mechanical counter that clocked up time, not distance. The instrument operator, looking at a different counter, would every so often write the fiducial number, the ‘fid’, against the mark on the chart. Had the two counters been synchronised at the start of the flight? One would hope so. Were they still synchronised at the end? That also had to be checked. 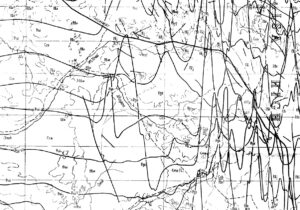 Figure 3. ‘Stacked profiles’ of magnetic variations at the eastern edge of the Georgina Basin.

Then the draftsmen would get to work, with their pens and their pantographs. For field interpretation and the preliminary reports, we couldn’t wait for the contours. What we got were ‘stacked profiles’ (Figure 3), on which anomalies with trends at right angles to the lines were pretty obvious, but those with trends parallel to the lines were invisible. But at least one didn’t have to wait for the tie-line analysis before beginning the interpretation.

There were great advantages to the DC-3s, which are still being recognised, and realised, via the Basler rebuilds operated by Bell Geospace. They had a much greater range and endurance than the newer aircraft that were gradually brought in to Australia to replace them. They also had an enormously greater carrying capacity, so that when the time came to move on, a large part of the survey team could simply be loaded on board. There would still be a road party (ground transport was always going to be needed, wherever the base), but by the time that caught up with the aircraft at the new location, survey flying would have already begun.

There was also room for guests and visitors, good for local PR, but with not always happy consequences. The survey crews were generally hardened to conditions in the air, and lost control of their breakfasts only occasionally, in the bumpiest of conditions, but that wasn’t always the case with outsiders. On one legendary occasion one of the locals decided to unburden himself through the open camera hatch. Half the product blew back in his face and the remainder went under the floor. The aircraft never smelled the same.

Of course, such people had to sign a disclaimer, absolving the Commonwealth of Australia from any responsibility if anything went wrong. Alec Spence, I remember (and possibly others of that generation of party chiefs) kept these documents in a drawer on the aircraft, leaving the C of A pretty vulnerable if the aircraft had crashed and burned, but we never considered that a possibility. Love those aircraft or hate them, we trusted them.

From my perspective there are a few things not quite right, with both the original post and the comment. Except for a special Tennant Creek survey, there was never an expectation of finding ore bodies with the magnetometer (it was an ambition for the scintillometer but that is another story). For just about everything except iron ore, the two-mile spacing was too wide – and the majority of the iron ore deposits in Australia are hematite, not magnetite, and didn’t even cause a wobble on the chart recorders. The regional coverage by BUR and MIN had two purposes. One was as aids to regional geological mapping of vast areas with very little outcrop. The other was getting rough ideas of the depths to basement in the sedimentary basins. The limitations in achieving both those objectives had more to do with the wide spacing of flight lines and the lack of navigation precision than with the analog nature of the instrumentation.

So, Elura and Olympic Dam?  By the time those deposits were discovered, in the mid-1970s, BUR and MIN had both been retired from survey work and were carrying freight and passengers. In 1971 BUR was gifted to Nepal by Australia’s Department of Foreign Affairs, and there she ended her days, but MIN was still in service with a company in Sydney, imaginatively named Dakota National Air, in 2005. She was last seen, minus engines, on a farm at Larra Lee in NSW, in 2015. So neither aircraft had a hand in either Elura or Olympic Dam, nor could either discovery be attributed directly to the maps they produced, but what their pioneering work did provide was the basis for the Australian mineral boom that continues to the present day.

**Of the joy of getting up in the dark, clearing the cats off the wood-burning stove in the pub kitchen, reviving the fire, slapping the inevitable steak on the hot plate (serve yourself at 5 a.m.), all with the aim of being at the end of the runway with the engines already run-up when the first shafts of sunlight came over the horizon, so that the flight could be done and dusted before it got really bumpy aloft.