The questions of Solomon

‘After joy, sorrow’ as the Medieval pessimists (or perhaps realists) were fond of warning.

And, after the fun of a conference (in this case the 15th Emile Argand Conference on Alpine Geological Studies), meeting a few old friends and making some new ones, comes the lonely business of preparing the publication, which in this case is being made rather more challenging than usual because I have been asked to range a little more widely than I did in my oral presentation. To cover all the ways in which observations in the East Indies gateway might possibly be applicable to Alpine studies is clearly a task wholly beyond my competence, and even the more limited aim of covering just those aspects in which I have been personally involved is asking a great deal. And one thing that has certainly been necessary has been for me to renew my acquaintance with the literature. What have been the developments in our understanding of the Sumatra forearc, or Papua New Guinea, or the margins of the Banda Sea, or the Philippines, since I last visited them?

It was in trying to answer those questions that I came upon a very remarkable paper. Remarkable, initially, because it seemed to have arrived on the Internet entirely free of any of the associations that one has come to expect. No reference back to a journal, or symposium, or anything like that. Nor was it an entry on a blog site. All there was by way of identification was a date, 2018, a title, ‘Deep Diving under the New Britain Trench’, a subtitle, ‘An examination of the junction between he Solomon Sea Plate, the Bismarck Plates and the Pacific Plate’, and the name of the author: Keren Francis.

With that much information and the resources of the Internet, nothing could remain hidden for very long, but there were some surprises in store. For a start, when the paper was written, its author was not much over eighteen years old, and the paper had been one of the entries to the Geological Society’s ‘Plate Tectonic Stories’ competition, basically a competition for schools. And another surprise: after such a promising start, Keren seems to have not only abandoned geology, but to have vanished from the web, altogether.

A sad loss to our science.

But what of what he, or more probably she, presented?

One of the things that she did was produce very nice illustrations, some of which introduced new ways of seeing familiar things. Foremost among those, for me at least, was her Figure 4.

This figure, a very nice use of MATLAB, shows that deep earthquakes associated with the New Britain Trench are pretty much confined to the region between longitudes 148°E and 155°E. To put that in a geological and geographical context, a map is required and I constructed one by adding coastlines to Keren’s Figure 3. 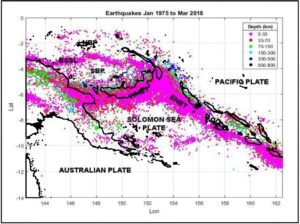 That immediately revealed a nomenclature problem, because Keren’s ‘West New Britain Trench’ turns out to be what I had always called the North Solomons Trench, and those two trenches meet almost at right angles, as can be seen in Figure 3. That is certainly not something that is apparent in Figure 1, and a glance at Figure 2 immediately shows why. The shallow earthquake band is extraordinarily wide, and that has allowed it to appear almost linear in the oblique view of Figure 1. This is, presumably, what lies behind Keren’s treatment of the two trenches as a single trench.

Can that be justified? 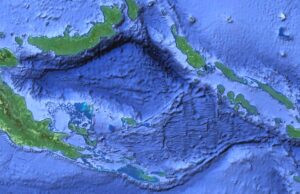 Figure 3. Topography and bathymetry of the Solomon Sea region. Google Earth image. Not all the apparent boundaries on this map are of geological origin; some merely mark the junctions between different data sets.

It is difficult to see how it can be. It is hard enough to make sense of the pattern of subduction of the Solomon Sea with a two-trench model. If we assume, and it seems a reasonable assumption, that once a piece of ocean floor has been subducted, it cannot be extracted again, at least while subduction continues at the trench in question, then we have to assume that both trenches, each of which is associated with an active Wadati-Benioff Zone, are advancing over the last surviving remnant of the Solomon Sea. What happens where they intersect is hard to imagine, let alone understand, but at least subduction can, in both cases, be roughly orthogonal; there is no need to look for the sort of ‘sliver plate’ that has been created by oblique subduction west of Sumatra.  If the two trenches move as one, then there must be oblique subduction at one of them and almost certainly at both, and there is no evidence for that..

Suppose that the whole arc system were to be moving south, along the line of the GPS-measured convergence between the Pacific Plate and stations on Kiriwina and Woodlark Islands at the southern margins of the Solomon Sea. The subducted Solomon Sea slab might try to subduct orthogonally to the both trenches, and might tear itself apart in the process.

Is that what those two zones of deep earthquakes in Figure 1 are trying to tell us?