One thing that a pandemic does is concentrate the mind on essentials, the availability of medical care and guidance being about the most essential of all. Here in the UK most medical care is provided to most people by the National Health Service, but ‘socialized medicine’ was, of course, anathema to Ayn Rand. Her alternative has to be deduced from her writing, but her novels are poor guides, because no-one important ever gets ill. She, of course, is dead and can’t be consulted, but her disciples are still around in numbers and one of them sometimes leaks into my Linkedin feed.

So I asked the question: –

“Your ideal government does not “do” anything for the people, apart from regulate them and protect them from other states. So, obviously, no state medical services. Doctors etc. are there only for those that can afford to pay for them. Anything else is altruism, which you see as a primary evil.

Now, all over the world, thanks to COVID-19, doctors, nurses and care workers are putting themselves at risk in a most un-Randian fashion. Not only are they living for other people, far too many of them are dying for other people. Are they, in your view, evil, or merely deluded?’

This is, of course, a reference to the Randian mantra that I SWEAR BY MY LIFE AND MY LOVE OF IT THAT I WILL NEVER LIVE FOR THE SAKE OF ANOTHER MAN, NOR ASK ANOTHER MAN TO LIVE FOR MINE’ and the accompanying belief that altruism is the root of all evil.

The first response I got was

“Medicine would be delivered with far greater competence (and availability) if people were not prevented from acting upon their own judgement. Any and all shortcomings are a result of the raft of unethical regulations imposed by BIG_GOVT_VIRUS. People require freedom to exist as humans. The only ethical purpose of govt is to protect that freedom. I repeatedly answer your question about who regulates govt, yet you refuse to see it. The govt is regulated by the resources people are volunteering to pay, just like any other good/service. Their freedom to act as a human, is a value that people are naturally willing to pay for.”

Which seemed little more than a series of very dubious assertions, none of which actually addressed the question, so I repeated it, and got this.

It doesn’t seem very rational self-interest to continue working with a very dangerous and very infectious disease without having access to proper protective equipment, but thousands and thousands of ‘healthcare professionals’ in this country are doing just that.  To help me understand, however, or perhaps in order to muddy the waters still further, a picture was added to this reply, with a quote. 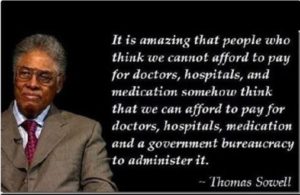 Sowell is a well-known libertarian writer, but the more I think about this particular quote, the crazier it seems. I know plenty of people who believe in the second of these propositions, and one or two who believe in the first, but I cannot even imagine the thought processes of those, whom Sowell seems to think exist in great numbers, who manage to believe both things at the same time. Either he is being quoted out of context, or he is not much of a logical thinker.

There is a second point. The Randian idea of how a medical service should function is presumably that you should go to a doctor, consult him, pay him on the spot, and if he/she refers you further, the same procedure applies, through tests, X-rays, treatments, etc. No pay, and you just suffer, or die.

That may have worked in village societies, where you went to consult the wise woman living in the last hut before the forest, taking with you a chicken or a bottle of rakia, but Rand liked to think of herself as a prophet for the modern world. And in the modern world, even those of us who have generous incomes feel the need for some sort of insurance against the possibility of catastrophic medical costs. My insurance now is the NHS, but I have worked in many countries, with many different medical systems, and the more lacking they were in any government-run medical bureaucracy, the more essential it was to be privately well insured. And I can tell you, from personal experience, that those insurance-based systems also required bureaucracies to support them, and that they were more complex, less efficient and, in the end, far more expensive than our governmental one.