One surprise for Rose when she was on Mauritius was a meeting with another naval wife in a somewhat similar position to her own. There were, however, very important differences. It seems that by this time (and in contrast to the days of Matthew Flinders), the British Navy was taking a more sympathetic  attitude to the marriages of their senior officers, and Renira Charlotte Purvis had not had to be smuggled aboard her husband’s ship.

During the time we were on Mauritius there was a British frigate whose captain was very friendly. His wife, who is quite young, sailed with him, but what a difference in their mission compared to that of Louis and myself. His job is to patrol the Indian Ocean to protect commercial shipping from pirates, anchoring where he wishes and when he wishes. Whenever they go ashore there is a house furnished and domestic servants to attend to their needs. Sometimes the husband goes on a short cruise and leaves his wife with friends, so as not to tire her with too long a journey. She gave birth soon after their arrival in Mauritius, where the frigate had docked for repairs. She is charming and well brought up. The similarity of our situations brought us together. [Duplomb: p56; FL686980] 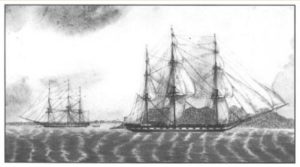 The frigate was the Magicienne and her role was not primarily, as Rose either supposed or thought tactful to write, to deal with pirates but to suppress the slave trade. Her captain, John Brett Purvis, was the son of one of England’s most distinguished admirals, John Child Purvis, who had sent him to sea in 1799, at the age of eleven, at that time the youngest age allowed. From there on he was almost continually afloat until the end of the Napoleonic Wars. The year 1815 was probably his first opportunity to get married and he seized it. He chose as his wife his 23-year old cousin Renira  and she sailed with him to Ceylon, India and China (of which she complained that ‘foreigners are not allowed to travel outside the cities’). Rose, however, was much more likely to have been envious of her proven fertility than of the more accommodating  attitudes of her husband’s employers to their employees’ families .

Had she been able to look into the future, she might have been a little less envious. John Richard, whom she would have met as a two year old, died when only six, and Renira probably lived long enough to see two out of her other three sons buried. Robert, born on Mauritius just before the Uranie arrived, died aged just thirty-nine, and the next son even earlier, in 1843, when only twenty-two. Renira was evidently still alive at the time. After returning to England in 1819, her husband did not go to sea again until 1841 when, remarkably after such a long lay-off, he was the appointed Commodore  of the South-east American Coast Squadron.  Perhaps even more remarkably, he was hugely successful in that role, at least in the opinion of the government of Uruguay, whose independence from both Argentina and Brazil he had championed. When he left the region, in August 1844, it was with a glowing testimonial in his hand.

The Government of the Oriental Republic of the Uruguay — Having ordered a Memorandum to the following effect to be invested in the Records of the State: Whereas John Brett Purvis, Esquire, Commodore and Commander-in-Chief of Her Britannic Majesty’s Naval Forces in these waters is about to sail for Rio Janeiro, the Government of the Republic desirous of testifying in a solemn and lasting manner, those sentiments of Respect, Gratitude and Attachment which the noble, generous and magnanimous manner in which he has conducted himself during his lengthened sojourn in this country, at the most difficult and hazardous period of its existence, has excited in the mind of the Supreme Authority of the State, also to express its best wishes for the happiness of himself and of his amiable family, whose names in the Republic of the Uruguay will never be pronounced without the highest veneration and regard. And for this purpose the Government has commanded this memorandum to be drawn out and a copy delivered to Commodore Purvis

The document was signed by the President, Joachim Suarez, and three leading members of the Government, and the mention in it of the ‘amiable family’ suggests that Renira was in Uruguay also. A year after his return to England, her husband was promoted to Rear Admiral, but their life together is frustratingly poorly documented, and his most significant legacy for historians of the British Navy was delivered before he even went to South America. In ‘Admiral of the Blue: The Life and Times of Admiral John Child Purvis’, Iain Gordon recorded that:

Throughout his commissioned service, John Child Purvis kept meticulous records and on his retirement was in possession of all his logs, order-books, letter-books and an enormous amount of loose correspondence mainly relating to his command of the Cadiz Squadron between 1806 and 1810. For Hotham’s actions off Genoa and Hyères in 1795, he had augmented the records in his log with detailed schedules of ship movements and signals.

After his death in 1825 the Papers remained in the cellars of his house, Vicar’s Hill, near Boidre in Hampshire, for several years where they became very damp and suffered some deterioration. They were discovered there by his elder son, Admiral John Brett Purvis, during a visit to the empty house in 1831; he brought them up to the drawing room, lit fires, dried them out, listed them and stored them in a dry cupboard.

From here they were passed down through the family, each generation preserving them intact, until 1954 when a great-great grandson of the Admiral (whom I shall not identify) broke up the collection, selling off individual letters of particular value and offering the balance to the highest bidder. The collection was thus split into three main parts the first of which was bought through Sotheby’s by the National Maritime Museum in April 1955.

There is a parallel here with the fate of the Freycinet archives, a few decades later, and it has similarly been the role of public museums and libraries to painstakingly reassemble the formally unified collection of the Purvis Papers by haunting the auction houses.

The extract also reveals one more interesting fact. In 1795 Purvis’ father had actually fought in an action against Louis and Henri de Freycinet.