A problem with some letters

Caroline de Nanteuil was not the only person to whom Rose de Freycinet wrote during the three long years she was away from France. She wrote also to her mother-in-law, Elisabeth de Freycinet, who copied extracts from her letters to her other daughter-in-law, Clementine, and to her own mother, Jeanne Pinon.  It was as well that she did so, because although she hand-carried her journal to Caroline after she returned to France, some of the notebooks in which she wrote it have been lost. Without her letters to Madame Pinon we would know nothing of her experiences in Dili, the capital of Portuguese Timor, or the Moluccas, or Guam, or the Hawaiian islands. We would not even know about the theft of the de Freycinet silver a few days after the arrival of the Uranie in Sydney, because the first surviving journal page from that part of the voyage describes the excursion to the lighthouse at the entrance to Port Jackson, which happened quite late in the visit. For the missing part of the journal, the editors of the first published edition (the 1927 edition) usedthe Pinon letters, but there is a problem. The originals of those have also been lost.

Fortunately for the editors, and for us, before the letters disappeared, copies were made and it is these that were preserved in the Freycinet family archives. There they remained until the 1980s, when they were sold off, to eventually find a haven alongside the remaining parts of the journal in the safety of the State Library of New South Wales. And, thanks to the library’s enlightened policies, the letters and the journal are all available online. In the library’s catalogue, the letters are introduced in the following way:

The second account of the voyage is through a series of 15 letters (a folio, of about 30,000 words on 206 pages with 13 left blank) written to her mother, Madame Pinon during the voyage. While the original letters did not survive, Louis had copied these out after Rose’s death in 1832, possibly after realising their value, to prepare them for publication. These do appear to be, from evidence within them, close transcriptions of the originals.

Transcription is, of course, always problematic, and as far as the pages of the journal that was written for, and given to, Caroline de Nanteuil are concerned, the originals can come as something of a shock to anyone familiar with the 1927 edition.  The editors, Charles Duplomb and the then Baron de Freycinet, were ruthless. Spellings, grammar and syntax they considered old-fashioned were changed, whole sentences of which they disapproved were recast and entire sections considered unsuitable for publication were omitted. Rose’s frank opinions of some of the members of the powerful Desbassaynes family of Réunion had to go, as did her description of the dismissive attitude of the captain of the Cybèle to the consequences of his ship’s collision with the Uranie.

There is a further surprise in store if the letters to Madame Pinon are examined. The editors were much kinder. They did, it is true, delete a few paragraphs and made some minor grammatical changes (the ‘p’s and ‘t’s have been inserted in words such as ‘temps’ and ‘instruments’), but the text was generally reproduced almost without change. Doing so would not have been entirely simple , because in some places the originals are almost illegible, thanks to heavy strikeouts and rewrites. Mysteriously, not all the letters are equally affected. Many, mainly those covering the early part of the voyage, are almost untouched. Had the editors decided to include the letters written during the early part of the stay in Sydney, they would have had a much more difficult job on their hands. 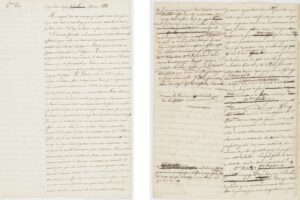 What an Earth is going on here? It is easy to understand why Rose’s originals might have contained crossings out and might also have been sometimes badly written. Writing with a quill pen on a ship at sea could never have been easy, and Rose herself noted that, after the long stay ashore on Guam, she was having difficulty adapting again to writing on board ship. But we don’t have her letters, we have copies, and the conditions under which they were made were presumably much the same for all. Why should some differ so much from others?

Figure 2. An enlargement of a part of the page shown on the right of Figure 1. Note that no attempt has been made to preserve the legibility of the omitted material.

There is a possible clue in the library’s description of the letters.

Parts of the manuscript are in Louis de Freycinet’s handwriting, in the earlier sections there may have been another hand involved.

No source is given for this statement, but it was probably taken from the Hordern House sale catalogue. Whether true or not (and it would need a much better handwriting expert than I to determine that), it does not explain why the more neatly written part has so few corrections, and the badly written part so many. For that there is another possible explanation.

Figure 3. An enlargement of a part of a page from the transcription of the letter written in Cape Town. At first sight the handwriting appears very different from that in Figure 2, but close examination of the word ‘beaucoup’, which appears in both, suggests they could have been written by the same person, in very different moods.

Suppose there were two transcriptions, and the second set was never completed. Suppose all of the first transcription looked like the transcription of the Sydney letter, but that what we have now for the earlier letters are fair copies. That would explain the facts, but has one rather unsettling implication. There may have been little need for Duplomb and the Baron to do much editing of the letters because, almost a hundred years earlier, Louis had done that job for them. What Rose really wrote is lost, presumably for ever.

There is another possibility. The almost 200 pages of letters take us up only to the departure of the Uranie from Sydney. We have nothing from Montevideo, where the ‘Physicienne’ spent almost a month, or from Rio, where it spent almost three months. Could the letters from Sydney have been transcribed badly because the work was done in haste, because Madame Pinon wanted her daughter’s letters back? Could the need to return them have been so great that there was no time to describe the last one or two? Hordern House had a different explanation.

This termination of the series of letters was clearly a practical issue. There would have been no opportunity to send private communications during the time on the Falklands following the shipwreck, and by the time the expedition reached South America in their borrowed ship (the Physicienne) they were already on their way home.

Is this plausible, considering the time Rose and Louis spent making “their way home”? Would not almost their first action on reaching Montevideo have been to find a ship heading directly to Europe, to take news of their survival?  We know, in fact, that such letters were sent, because Elisabeth de Freycinet received one, and she transcribed a part of it in a letter to Henri and Clementine. Rose had written it on the 20th of April 1820, when she was still in the Falklands, and she had not arrived in France when Elisabeth wrote, so it must have been sent from either Montevideo or Rio.  Is it plausible that she would have written from South America to her mother-in-law but not to her own mother?

I don’t think so.