There has to be a point on the Earth’s land surface where the effect of geology on gravity is greatest. With almost all land areas now covered to some extent by gravity surveys, it is possible to say, with a fair degree of confidence, where that place is. It is on the largest of the Bonin (or Ogasawara) Islands, Chichi-jima, where the maximum effect is more than 340 milligal, or about one three-hundredth of the Earth’s average field strength. And, by a bizarre coincidence, this tiny speck of land in the northwest Pacific, 1000 kilometres due south of Tokyo, was amongst the first places at which a gravity measurement valid to a few tens of milligals was made

On the 5th of February 1831, Henry Foster, captain of Her Majesty’s sloop Chanticleer, fell overboard from the canoe in which he was returning to his ship and was drowned in the Chagres River. Foster had assisted Edward Sabine (who later became President of the Royal Society) in using pendulums to measure gravity around the Atlantic, and was continuing this work in the Chanticleer when he died. In many ways his death marked the end of the first phase of global gravity survey, and as a memorial to him Francis Baily, President of the Royal Astronomical Society, given the task of reporting on Foster’s final suite of measurements, expanded on his brief and presented a compilation of all the, in his terms, reliable pendulum data he could find, making corrections and adjustments to each set of readings in order to arrive at a self-consistent data set. One of the measurements was made by the Russian explorer Friedrich Lütke during a visit to Chichi-jima. Baily’s general comments on Lütke’s work give an insight into the rigour of his own approach to the task

It would appear …… that the pendulum employed by Captain Leutke is the same as that used by Captain НАLL: but, if so, it must have undergone some alteration, as it does not now make precisely the same number of vibrations, as when it was in Captain НАLL’s possession.  Before quitting England, Сaptain Leutke made a series of experiments with this pendulum at Greenwich; and again, on his return to this country: the results differed only 0.60 vibration from each other. Не assumes the correction for the rate of expansion to be 0.458 vibration for each degree of Fahrenheit, deduced from some experiments made by himself at St. Petersburg, for this express purpose; which is 0.035 greater than the correction adopted by most other experimentalists. The following are the results at the several stations: but I must previously state that with respect to the true correction for the buoyancy of the atmosphere, I am obliged, for want of the requisite data, to assume an approximate value. I have therefore increased the number of vibrations, given by Captain Leutke, at the first three stations, by 3.80; the next three, by 3.90; and the last three, by 4.00. Тhis is founded on the scale of increase observed at Captain Sabine’s stations, under nearly similar latitudes; and, I trust, will not differ much from the truth. [Baily: pp92-93]

On pages 96 and 97 of his report Baily listed his best estimates for the final corrected results at the fifty-one places where he believed that measurements of an acceptable standard had been made. London, where the were eleven determinations (these and other duplicates bringing the total number of determinations listed up to seventy eight) was taken as the reference point and the results were expressed in terms of vibrations per day of the ‘seconds pendulum’ that made 864000 vibrations per day at Kater’s base at the London house of Henry Browne. The list also showed the values expected on the basis of the then current Earth model. The result from Chichi-jima stands out, it being the only place where the difference between observation and expectation reached double figures. In ‘The Hunt for Earth Gravity’ I gave an estimate of the actual gravity value at the London site using nearby points occupied by the British Geological Survey, and this suggests that the geological effect recorded by Lütke would have been between 300 and 310 milligal. 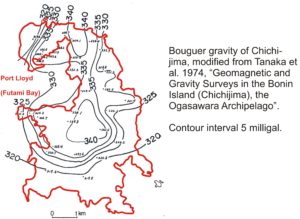 What should it have been? In 1973 measurements were made on Chichijima using state-of-the-art gravity meters and the results have been published, but the gravity gradients on the island are very steep in places and we do not know exactly where the measurements were made. We have, however, some clues. The islands have had a chequered history, with several attempts at colonisation (the name ‘Bonin’ is derived from the Japanese for ‘uninhabited’), but in 1827 Captain F. W. Beechey of HMS Blossom landed on the island and claimed the archipelago to be British. Baily, in a footnote, proudly records the fact that Beechey named the southernmost major island in the group after him, but the name has long since been forgotten.

Beechey was far from being the first European to visit the island, and when he arrived he was astonished to find that two were already living there. They were part of the crew of the London whaler,William, that had been wrecked while sheltering in Port Lloyd (now Futami Bay). All the crew survived the wreck and, as was almost routine at the time, they set about building a new boat from the remnants of the old, but before it could be completed another whaler arrived and took off most of the castaways. These two, however, had found Chichijima so much to their liking that they had decided to stay, and had established their homes not on the north side of the harbour, which is where most of the present-day islanders live, but on the south side. They were still on the island when Lütke arrived a year later and it is very likely that he made his observations near to the huts the ‘colonists’ had built for themselves. If so, the 1973 gravity map suggests that the geological effect was actually between 330 and 335 milligal. Lütke’s estimate was impressively close.

Its high gravity field is not Chichi-jima’s only claim to fame. It is also the type area for boninites, igneous rocks that are important constituents of ophiolites and are now widely thought to have been emplaced in forearcs during subduction initiation. ‘Big slab’ ophiolites that are also associated with high gravity are forearcs that have been thrust onto continental margins. Chichi-jima is an ophiolite in waiting, and since it rests on dense oceanic rather than relatively light continental crust, the gravity field is inevitably high. The reason for the island’s emergence above sea level, given that most forearcs are entirely submarine, is not entirely clear, but it has almost certainly involved the subduction of seamounts or submerged plateaus on the downgoing plate.