In my small corner of LinkedIn, one of the less predictable objects of hate posts is the seemingly obscure topic of peer-review. As with so much else that arouses strong emotions and intemperate comment, the anthropogenic global warming theory is at the bottom of it all. While relishing their perceived role as a persecuted minority, AGW’s more vociferous opponents are also keen to identify the majority’s control of peer review as a sign and an instrument of a massive global conspiracy against them.

Peer review is, of course, an easy target. Even those promoting the system acknowledge its imperfections, and I was recently prompted to think about it historically because I was asked to review a paper on a new system, promoted by University College London’s ‘UCL Open Environment’ offshoot

The preamble to the guide to reviewers said:

Review by academic peers is an essential part of the scholarly publishing and communication process. By sharing their expert opinion, peers evaluate and improve the research of their peers. However, peer review is not a perfect system.

One of the concerns with the traditional closed model of peer review (where reviewers are anonymised to authors) is that reviewers are seldom credited for their voluntary performance. A further dispute is that unscrupulous reviewers can hamper scholarly progress by demanding questionable changes, either intentionally exploiting anonymity or because they are simply unsuitable. Peer review suffers from a lack of transparency, recognition, and accountability

All true, of course, although the fact that reviewers receive little credit for their work is perhaps the least of the criticisms made against the system. At the forefront of the objections is the opportuny it provides for academic skulduggery and the suppression of heresy. Even sixty years on, who in the geological community can forget the rejection of the Lawrence Morley paper, the first to make the key interpretation of the origin of oceanic magnetic anomalies, as an idea that might be interesting for “talk at cocktail parties, but it is not the sort of thing that ought to be published under serious scientific aegis.” With this sort of thing in mind, the fact that UCL is now offering ‘open peer review’; as an alternative seemed worth looking at, and participating in. According to the website, what is offered is

“a preprint server post-publication open peer review model (the names and affiliations of reviewers are published alongside their review reports). Submissions approved for preprint status to undergo open peer review are generally acceptable for official publication in the journal once at least 2 peer reviews have been provided and the Editor is satisfied any comments raised during peer review have been adequately met”.

Once one has unravelled and made sense of that first nine-word concatenation of nouns and adjectives, it emerges that what UCL is offering is a reversion to an earlier system, and one with a history. And one particular item of history in particular.

Much of the blame for peer review, as for much else, has to be shouldered by Johannes Gutenberg, born in 1397 and dying in 1468, has to take much of the blame for that, as for so much else. Without mobile type and the printing press, there would be no scientific papers, and therefore no reviewers. Once those existed, the route to publish or perish was open. Sometimes, of course, it could be both, and Copernicus was probably wise to ensure that the publication of his own heliocentric system took place only when he was on his death bed, in 1543. The system of publication in those days, however, had more in common with the free-for-all of today’s internet, with self-publication dominant in the search for wealthy patrons who might not only fund further work but, more importantly, put food in the mouths of wives and families. That was the trajectory that Johannes Kepler was forced to follow for most of his life, which ended in poverty in 1630..The formalisation of pre-publication peer review had to wait until there were academic journals to publish in, and the first of these to achieve longevity was the ‘Philosophical Transactions of the Royal Society’. It was at this point that aspiring scientists began to encounter that fearsome figure, the journal editor, and an early victim was a then quite obscure scientist named Isaac Newton. In 1672, he decided to submit to the society a letter containing his New Theory of Light. It was published in Volume 80 of the Philosophical Transactions, occupying pages 3075-3087, but in reaching that point it had to pass through the hands of Robert Hooke, who had his own ideas on the subject. 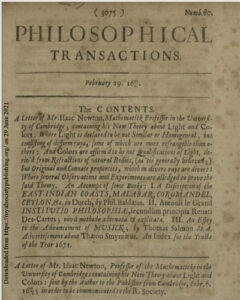 At that time, Hooke was a far more important figure on the UK scientific scene than Newton, semi-isolated in the distant fens, and a rare visitor to London. Hooke was based in the capital, and was, simultaneously, the curator of experiments of the Royal Society, a member of its council, Gresham Professor of Geometry, and Surveyor to the City of London after the Great Fire of London. Despite being extraordinarily busy, in conjunction with Christopher Wren, in redesigning the city, he was not going to let an opportunity to present his own theory of light go by. What he wanted to do was very close to what UCL is now proposing. He wanted to publish his own review alongside Newton’s letter.

Even the Society thought that was going a bit far. Hooke’s critique was published, but not until 1672, a decent interval after Newton’s letter, and it began with a disclaimer.

Mr. HOOKE’S considerations upon Mr. NEWTON’S discourse on light and colours were read. Mr. Hooke was thanked for the pains taken in bringing in such ingenious reflections; and it was ordered, that this paper should be registred, and a copy of it immediately sent to Mr. NEWTON: and that in the mean time the printing of Mr. NEWTON’S discourse by itself might go on, and if he did not contradict it; and that Mr. HOOKE’S paper might be printed afterwards, it not being thought fit to print them together, lest Mr. NEWTON should look upon it as a disrespect, in printing so sudden a refutation of a discourse of his, which had met with so much applause at the Society but a few days before.

It was a compromise that pleased nobody, least of all Newton. It was the start of an animosity between the two men that erupted later in an argument for priority in the formulation of the inverse square law of gravity, and persisted throughout their lives. In the end, Newton won, because Hooke died first.

So what about UCL’s idea, of publishing the reviews together with the paper?

I don’t think it has a future. A decent peer review can be uninhibited. It can be highly critical, because it will only be read by the editor and the author(s) of the original paper, and if it is highly critical, it is likely to also be highly constructive. Peer-review is not, or should not be, an adversarial process, but publication side by side of review and paper is by its very nature adversarial. Either the review will be too bland to be useful, or it will run the risk of sparking a lifelong enmity.

Peer review as it exists today is a deeply flawed process.

But I cannot for the life of me think of a better one.