It is, I realise with something of a shock, more than fifty years since I was last in eastern Papua (and fifteen since I did field work in any part of New Guinea), but recent correspondence initiated by Hugh Davies shows that there are still mysteries to be solved. As a consequence of that correspondence, I came upon a 2014 paper by David Lindley in the Australian Journal of Earth Sciences titled “Suckling Dome and the Australian–Woodlark plate boundary in eastern Papua: the geology of the Keveri and Ada’u Valleys” which is very relevant, incorporates a gravity map and draws conclusions from it. Those conclusions are outlined in the Abstract, part of which said:

The Owen Stanley Fault Zone (OSFZ) is the low-angle thrust boundary between the Australian and Woodlark plates. The eastern extension of the OSFZ links with the Woodlark Basin spreading centre. Recent tectonic models of eastern Papua depict the OSFZ boundary passing through the Mt Suckling district, with the Keveri Fault a key component. Gravity data clearly show that the OSFZ and the Papuan Ultramafic Belt (PUB) pass north of Mt Suckling. Tectonised mafic and ultramafic rocks of the Mt Suckling district, previously referred to the PUB, are reassigned to the Awariobo Range Complex (new name). Extensive pillow basalts previously referred to the middle Eocene part of the Kutu Volcanics at the top of the PUB sequence are, in the map area, reassigned on lithological and biostratigraphic grounds to the late Oligocene–middle Miocene Wavera Volcanics. 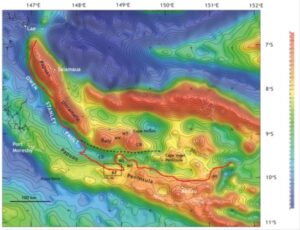 The gravity map clarifies the nature of the problem. On the peninsula and out as far as Normanby Island, the red line follows the southern limits of mafic and ultramafic rocks that might plausibly be considered to be parts of the Papuan Ultramafic Belt, which is one of the world’s largest ophiolites. In the east this line very obviously departs from the southern and western edge of the strong positive gravity anomaly that the ophiolite produces. To really get to grips with this area, and the whole of the (considerably longer) abstract, what is needed is a map showing both geology and Bouguer gravity. Fortunately, I have such a map to hand, although it is rather old. Fifty-three and a half years old, to be reasonably precise. 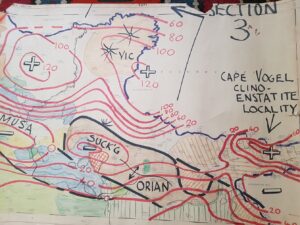 Figure 2: Bouguer gravity and geology of the Tufi 1:250,000 sheet area, Papua New Guinea. Map prepared in the offices of the Bureau of Mineral Resources, Canberra, in May 1968. Geology: H. L. Davies.  Gravity J. Milsom. Terrain corrections not applied. Contour interval 20 mGal. The Keveri Valley area, in which the field work described by Lindsey has been concentrated, is located just to the west of the value ‘60’ on the southernmost contour in the western half of the sheet.

What this map shows very clearly is that the ultramafic outcrops in this area are distributed on both flanks of a gravity low. It seems reasonable to hypothesize that they are parts of a formerly continuous sheet, of which the central part has been eroded out. The gravity high that identifies the location of the main bulk of the ophiolite coincides with an extensive swampy plain from which outcrop is entirely absent.

There is no great mystery about what is going on here. The root zone of the ophiolite underlies the swamps, and the quite extensive outcrops are merely klippen, resting on sub-horizontal thrusts and with movements lubricated by serpentinisation. Were there any doubt about this as a possibility, we have an example that can be examined without any intervening soil and vegetation. We have the Semail Nappe of Oman and the United Arab Emirates. 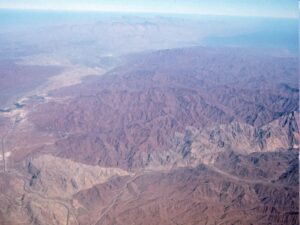 Figure 3: The Semail ophiolite (dark-colored mountains) in the United Arab Emirates–Oman mountains and the Bani Hamid out-of-sequence thrust sheet (light-colored mountains). The Arabian Gulf is at the top left, and the Gulf of Oman at the top right. Photo: Mike Searle. An annotated, but lower quality version is also available on the internet.

The extensive ophiolite outcrop in Figure 3 would have little effect on the gravity field. Even if dense, it is thin, and the density would be reduced to the extent that there is serpentinisation. Seen in this light, the question of the location of the Owen Stanley Fault could be considered one of semantics rather than geology. Anyone who chooses to regard the fault as the faulted contact between the ophiolite and the rocks that it overthrusts must place it along not just the southern side of the outcrops west of Mt Suckling but all the way around them. Anyone who wants to define it as the primary and moderately steeply dipping thrust fault that constitutes the terrane boundary must follow the line that is so clearly defined by gravity.

This much is clear, but there is a corollorary. When Lindley says “there is no gravity anomaly associated with the ultramafic rocks of the Mt Suckling district, suggesting they are unrelated to the PUB”, and when, in his abstract, he defines an Awariobo Range Complex distinct from the Papuan Ultramafic Belt, I would contend he is allowing  a purely semantic confusion to lead him into a geological/geophysical misinterpretation. I believe that those outcrops ARE part of the PUB.

Which is not to say that there is not still much to be understood about the Suckling-Dayman Dome, its relationship to the domes of the Dentrecasteaux Islands and the role of the Keveri Fault. And perhaps gravity can play a part in delivering that understanding. But that is something for another blog. Or blogs.

** In some ways we had it easy in those days. A glance through the papers published on this area in this century suggests that for a publication to be taken seriously at least fifty to a hundred references are required. When the gravity surveys and original geological mapping were being done there was almost no literature to be cited, and we knew just about all the possible authors anyway.