Early in the morning of the 22 March 2020 a magnitude 5.3 earthquake nucleated at a depth of about 10 km close to Kašina, a village on the southern slopes of the Medvednica mountain some 15 km NE of the centre of Zagreb.  More than 25,000 buildings in the city were damaged and almost two thousand were declared unusable. One of the spires of the cathedral broke away and fell on the archbishop’s palace and a part of the roof of the parliament building collapsed, causing sittings to be suspended. It was the older buildings that suffered most, because in 1964 new standards of construction had been introduced after a disastrous earthquake in Skopje, in Macedonia. This was far from being the first earthquake to be felt Zagreb in historical times. One of them had far-reaching effects on the Earth Sciences.

Towards the end of 1891, after nine years spent teaching physics and meteorology in the naval school in Bakar, on the Adriatic coast of Croatia, Andrija Mohorovičić moved to Zagreb to take up a post at the High School (Velika realka) in Zagreb. A few months later he was appointed head of the Meteorological Observatory that formed a part of the school. It was presumably because the observatory was there  that he had decided on the move to the capital, and it had placed him in charge of the premier meteorological institute in Croatia. As a passionate Croatian, he set about following in the steps of his predecessors by upgrading the instrumentation to reduce and eventually eliminate the dependence on, and subservience to, the meteorologists in Budapest. Among the instruments that he added were new and more sensitive seismographs. 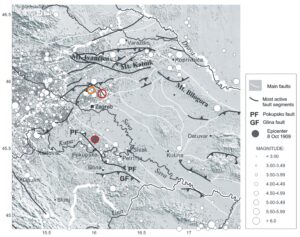 If it was Andrija Mohorovičić who insisted on installing the seismographs, he would have been pushing at an open door, but it is quite possible, since he is not recorded as having shown any great interest in seismology prior to the move to Zagreb, that he was simply responding to the wishes of the people around him. Zagreb in 1891 was a city still traumatised by the consequences of an earthquake with an estimated magnitude of 6.3 on the Richter scale that had shaken the region in November 1880 from a hypocentre beneath the northern slopes of the Medvednica. That estimated magnitude implies a shock with ten times the power of the event in 2020, produced by movement on the same fault system. Only two people were killed but the damage was extensive. It was estimated that repairs to houses alone would have cost two million forints, equal to half the annual revenue of Croatia-Slavonia, then an ‘autonomous’ kingdom governed by a ‘ban’ appointed in Budapest. The Emperor Franz- Joseph, in his role as King of Hungary,  managed to find just 20,000 forints out of his own pocket for the reconstruction, and most of it was paid for by donations collected from throughout  ​​Austria-Hungary,  and from places as far afield as the Vatican,  Copenhagen, Istanbul, Cardiff, London, Paris, Bern, Sofia and Alexandria. The study of earthquakes had become a necessity in Zagreb, and Andrija embarked on it with his usual attention to detail. When, on 8 October 1909, a strong (Magnitude 5.7) earthquake occurred near Popusko in the Kupa valley southeast of the city, he was ready. He had just finished installing two Wiechert-type seismographs and was able to write proudly that “We have thus reached the level of the  better observatories of Central Europe, and would have surpassed them had there been room for further instruments.”

The Popusko earthquake, like the Medvenica events, was nucleated on a high-angle reverse fault, although one with a very different orientation. More importantly from the point of view of the history of geophysics, it was strong enough to be recorded at observatories more than two thousand kilometres distant, even with the instrumentation available at the time. Mohorovičić decided to make a full analysis, using P and S-wave records from as many places as possible, in order to estimate the depth of the hypocentre. What he found was that two longitudinal wave arrivals (which he labelled Pn and P) and two transverse wave arrivals (Sn and S) were being recorded at distances of between 300 and 720 km, but that nearer stations recorded only P and S and more distant stations recorded only Pn and Sn. He found himself unable to explain these observations in terms of the then current paradigm, which was that Earth properties changed continuously with depth down to at least 1200 km, and had instead to introduce a sharp velocity discontinuity at a depth of several tens of kilometres. With that assumption made, he was able to derive a law for the rate of increase of velocity with depth down to the discontinuity. What was to become known as Mohorovičić’s Law states that:

where c0 is the speed of the wave close at the Earth’s surface, r0 is the Earth’s radius, r is the radius to the point at which the velocity of the seismic wave is determined and k is an exponent expressing the increase in velocity with depth. The values ​​of c0 and k are different for P and S waves. Using this expression, he was able to calculate a 20 km hypocentral depth for the earthquake, which is what he was primarily interested in, and incidentally a depth to the discontinuity, which we would now recognise as the base of the crust,  which he estimated at 54 km. 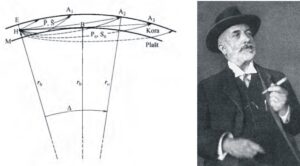 Left: Drawing by Andrija Mohorovičić, illustrating his theory explaining the pattern of arrivals of P (longitudinal) and S (transverse) waves from the Popusko earthquake. Reproduced in “Andrija  Mohorovičić, u znanosti i vremenu”  (Andrija  Mohorovičić, science and times) by Dragutin Skoko, from which much of the information in this blog is taken. , Right: Mohorovičić in later life

One of the most remarkable things about this story is that Mohorovičić’s almost unpronounceable name ever became attached to the discontinuity. His own publication of the theory was in Croatian and German in the 1910 edition of the Yearbook of the Zagreb Meteorological Observatory and might soon have been forgotten had it not been noticed and publicised by Hans Benndorf, the founder of the seismological observatory in Graz. For Benndorf  and his colleagues in European seismology, it was Mohorovičić’s Law that was important, and it was only after its use became widespread (which happened only slowly, and almost ceased during the First World War) that it began to be realised that the discontinuity that was at the heart of the equations varied in depth, and was at its deepest in mountainous areas.  Only then did seismological and gravitational geophysics come together, with this confirmation of the Airy theory of isostasy.

A second consequence of Mohorovičić’s analysis, which was the realisation that earthquakes could occur many tens of kilometres below the surface of the Earth, was also slow to find acceptance. It was not until tfifteen years later, when Kiyoo Wadati began to define earthquake hypocentres at depths of more than 100 kilometres beneath Japan, that its significance was realised.

Mohorovičić himself followed another path. Hie seems to have been less interested in the theory of earthquakes than in their destructive consequences. It was an interest almost certainly prompted by an event that preceded the Popusko earthquake. In 1908, and so before the Weichert instruments were operational n Zagreb, there was an earthquake in southern Italy that almost completely destroyed the cities of Messina and Reggio Calabria, with the deaths of some 80,000 people. For the rest of his life (he died in 1936) Mohorovičić devoted his time to the study of the effect of seismic waves on buildings and how they might be mitigated. It was not until almost twenty years after his death that the principles he established began to be applied in the city in which he had done his most important work.

There is no doubt that Mohorovičić is deservedly famous. The work he did laid the foundations for the use of earthquake waves in understanding the Earth, but brilliance has not always been enough to ensure that a scientist is remembered. His work might easily have been overlooked, or lesser men might have received the credit, but this is one case where the right man has been honoured.