It is not often I agree with Peter Hitchens, but it can happen. A few days he wrote an article for the Daily Mail, centred around a picture of the Foreign Secretary, Liz Truss, taking a photo-op on a Challenger tank, somewhere in Estonia.

Hitchens is absolutely right. She does look ridiculous. To misquote the Duke of Wellington being misquoted, I am sure she does not frighten the Russians, but by God, she frightens me. This is the Foreign Secretary of the United Kingdom. Heaven help us all. 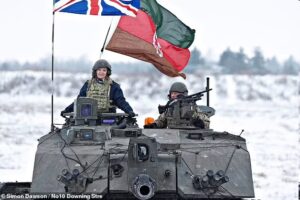 Foreign Secretary Liz Truss, on a tank, somewhere in Estonia

Inevitably, Hitchens and I soon part company, but what really stopped me in my tracks was this sentence in the same article.

“Lefty liberals, such as she is, never look quite right in combat gear.”

Liz Truss, co-author of ‘Britannia Unchained’ and founder of the House of Commons Free Enterprise Group a lefty? I never would have guessed.

Then another picture and another article intervened. This time from America, where a Republican congressman has chosen to send out, as his Christmas greetings, a picture of his entire immediate and happily smiling family, armed to the teeth with firearms that were designed for one purpose and one purpose only. Killing people. 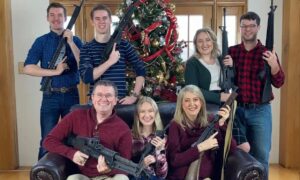 Which led me to musing more generally about the love of libertarians for weaponry. And about Ayn Rand.

Of all the probably millions of words that have been written about Ayn Rand and her books, comparatively few have dealt with the final climax of Atlas Shrugged. Perhaps there were not too many readers who got past the first thousand pages. In the finale, America descends into chaos and millions can be assumed to be dying or about to die. The elect of her fictional mini-state of Galt’s Gulch view it all from the air, taking satisfaction in the sight of the lights of New York going out as the city beaks down into barbarism. They are on their way back from having rescued John Galt from the hands of the looters, and one person who stood in the way of that rescue was a poor confused guard who did not know whether or not to let Dagny pass.

“Calmly and impersonally, she, who would have hesitated to fire at an animal, pulled the trigger and fired straight at the heart of a man who had wanted to exist without the responsibility of consciousness.” (Atlas Shrugged, Signet 35th Anniversary edition p.1055).

That is the sort of woman Rand admired, not a puppet on a string lookalike such as Liz Truss. But what she admired even more was masculine brutality, and it led her into some strange pathways. It led her to invent the character of Ragnar Danneskjöld, sometime fellow-student with John Galt and Francisco D’Anconia, and later a professional pirate specializing in preying on ships taking aid to the starving continent of Europe. Rand did have to acknowledge that there were some people in Galt’s Gulch who did not quite approve of these actions, but it is pretty clear that she found the idea thrilling, even though directly contrary to the principles set out by John Galt in his sixty-page rant. It included some thoughts on the ethics of violence.

“A holdup man seeks to gain wealth by killing me; I do not grow richer by killing a holdup man. I seek no values by means of evil, nor do I surrender my values to evil.” (Atlas Shrugged, Signet 35th Anniversary edition p.941).

Ragnar, the hold-up man par excellence, seems to have been allowed to be an exception. More of him in another blog, but it is also instructive to return to that flight over New York, just before the lights go out.

“Looking down they could see the last convulsions: the lights of the cars were darting through the streets, like animals trapped in a maze, frantically seeking an exit, the bridges were jammed with cars, the approaches to the bridges were veins of massed headlights, glittering bottlenecks stopping all motion, and the desperate screaming of sirens reached faintly to the height of the plan. The news of the continent’s severed artery had now engulfed the city, men were deserting their posts,, trying in panic to abandon New York, seeking escape where all roads were cut off and escape was no longer possible.” (Atlas Shrugged, Signet 35th Anniversary edition p. 1064).

Is there not just a little too much gloating over this scene of destruction, and admiration for the men in the plane who had conspired to cause it?

Another thought strikes. The rescue was necessary because Galt was being horrifically, and technologically, tortured to give up the secret of his ‘power from the air’ machine, and, of course, was proving heroically impossible to crack. But there is another common scenario in thrillers, and even in real life, in such situations, where it is not the person who has the knowledge who is being tortured but a person he or she loves. Would Galt have cracked if it had been Dagny being tortured? Would he have rated the secret of his motor above the suffering of the woman he loved?

We have his answer.

“I swear by my life and my love of it that I will never live for the sake of another man, nor ask another man to live for mine.”

That presumably applied to women too.