For Rose de Freycinet, the 20th of April 1820 was one of the worst days of her journey round the world. Escape from the Falklands was a near-certainty, since she was already aboard the Mercury, but reaction had set in. The cabin she would share with Louis was awful and, to make things much, much worse, he was so ill that he was unable to leave his cot. The society of the original passengers, some and possibly all of whom were English, was intolerable. Soon after coming on board she wrote that she often wished ‘to send them to the devil, one because of his bad manners, another because of his pride, a third because of his conceit and stupid self-importance” [FL687094]. Later she was to characterise them as ‘Ostrogoths’, but they could hardly be expected to be other than hostile. They had been on their way to join a revolution but, thanks to the encounter with the Uranie’s castaways, they were about to head off in completely the wrong direction. They made several attempts to persuade the Mercury‘s captain, John Galvin, to either abandon the castaways altogether or just take them with him only to Valparaiso, his original destination. Had he decided to take that second course, one of the consequences could have been very interesting indeed. Rose would almost certainly have found herself meeting another woman who, like her, had married a sailor many years older than herself. But unlike Rose, Kate Cochrane had not been welcomed into the family by her husband’s relatives. His uncle, Basil Cochrane, disinherited him when he heard of his elopement and subsequent marriage. 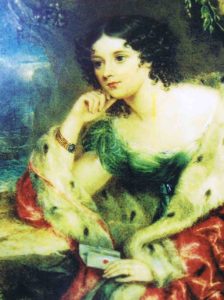 The husband in question was Thomas Cochrane, later the 10th Earl of Dundonald, England’s most successful, flamboyant and controversial frigate captain. Dismissed in disgrace from the Royal Navy following a stock exchange fraud in which he may or may not have been one of the guilty parties (he had bought and then sold a large block of shares at suspiciously profitable moments), he sailed for Chile with Kate and their two children and arrived in Valparaiso in late November 1818 to take command of the Chilean navy. It was there that Kate spent much of the next four years, although she travelled remarkably widely within Chile and even crossed the Andes into what is now Argentina, and she sometimes went to sea with her husband. On at least one of the occasions when she did not do so she would certainly have regretted it, because her five-year old son escaped onto his father’s ship just as it was leaving port  and was subsequently involved in a sea battle in which a marine standing next to him quite literally lost his head. It was taken off by a cannon ball.

For Kate, going to sea might have been less dangerous than staying ashore, even with the strong possibility of involvement in ship-to-ship action. For a part of the time that her son and husband were away together she stayed in a country house at Quillota, in the mountains some 30 km north-east of Valparaiso, and while there ‘her life was endangered by a ruffian in the interest of the Spanish faction’. His aim was to extract information from her about Cochrane’s movements and he was quite prepared to use force to do so. Kate was having none of that and fought him off, receiving a nasty cut from a stiletto before her servants arrived and rescued her. She later successfully interceded for the man’s life to be spared, and he was banished instead. A remarkably lenient alternative to the death sentence, one might think, since his one wish after the failure of his mission was probably to leave the area as fast as possible.

At about the same time as Rose was making a second visit to Rio, Kate had to cope with a second attempt on her life, which took place while she was carrying despatches ‘of importance’ to the rebels in Mendoza, on the far side of the Andes. Her attacker, once again a lone ‘ruffian’ and possibly a simple bandit rather than a hired assassin, was attacked in his turn by one of her escorts and fled. By this time she might have been so well prepared for such happenings that she would have found having to spend the night in a stone hut in the thin air and intense cold of the high cordillera a greater ordeal. She slept, if she managed to sleep at all, on a dried bullock hide, which her husband described as ‘a degree of suffering which few ladies would be willing to encounter’.

The two couples were near contemporaries. Cochrane was born in 1775, Louis in 1779. Rose was born in 1794 and Kate in around 1795. The Cochrane marriage took place in 1812 and the de Freycinet marriage in 1813. Had Rose and Kate ever met, these two indomitable women would surely have found they had much in common, but also much in which they differed. For Rose the most important difference would have been that Kate had already produced three children (although one died in Chile), while she herself was, and remained,childless