On the 21 October 1819, exactly 200 years before this blog was being posted, Rose de Freycinet wrote to her mother …

Allow me, Madam, to inform you that the corvette Uranie discovered, to the east of the Archipelago of the Navigators, a small island that does not appear on any of the most recent charts of these seas and to which the captain of the above-mentioned corvette has given the name of Île Rose. It is done, there is my name attached to a tiny part of the globe; tiny enough, in fact, that even the envious will allow him to name this islet, for such it is. If encountered by night it could have been fatal to us but now that it is marked on the charts of the expedition, we will not and, I hope, no one will ever, perish on the hazards surrounding the Île Rose. [FL677031]

The ‘Archipelago of the Navigators’ is what we now know as the Samoas. In his own report Louis de Freycinet wrote that ‘I named it Île Rose, after someone who is very dear to me’, but it is almost certain that the crew of the Uranie were not the first Europeans to see it. The earliest such sighting was probably by Jacob Roggeveen on 13 June, 1722, who named it Vuil Eiland (Foul Island), which may have discouraged anyone from putting it on their maps. In 1824 it was seen again by the expedition commanded by Otto von Kotzebue, who named it Kordinkov after his First Lieutenant, but he subsequently gracefully conceded priority to the de Freycinets.

Scientifically, the sail-by of Rose Island represented another opportunity missed by the part-time naturalists of the Uranie . After they returned to France, Quoy and Gaimard presented a paper to the Académie des Sciences on the formation of coral reefs, in which they expressed some doubts about sailors’ reports of heavily vegetated low islands that were remote from other land. After providing an excellent summary of how a low island might form and become stabilised by vegetation, they added that

For this to happen, the island must not be too far from a continent, because if it were, then plants could not reach it so easily, and such islets almost always remain bare and sterile. That is why sailors’ reports of madreporic islands in the great ocean that are covered with vegetation even though far from any other land have always seemed extraordinary to us; all the more so because, in these immense spaces, the violence of the waves, where there is nothing to dampen them, must hinder the work of the zoophytes. We do not deny the existence of these islands, but it would be interesting to examine them; for as soon as sailors encounter low islands in the tropics, they follow the generally accepted opinion and do not hesitate to say that they are madreporic. [Quoy and Gaimard; p670]

Rose Island would have been a perfect test case; it is almost 150 km from its nearest neighbour and a very, very long way from the nearest continent. A quick visit (involving a delay that would have been trivial compared to the weeks just spent mapping the magnetic equator) would have confirmed that the island was indeed ‘madreporic’ (i.e. coralline) and they would have discovered that the vegetation, although luxuriant, was made up of just a few species. These would have included Pisonia, which has seeds that can stick to birds’ feathers and reach remote islands in that way, and Tournefortia, which, by an alternative but seemingly much chancier dispersal mechanism, has seeds that float and are resistant to sea water. The doubts that Quoy and Gaimard had about the truth of the sailors’ tales would have been set to rest but, because atolls were not well-known at the time, they might not have recognised that Rose is a very strange atoll indeed. It is one of the world’s smallest and, whereas most are circular or elliptical or at the very least formed of reefs that are mostly curved, Rose is almost rectangular. The supporting volcanic structure is equally remarkable, being characterised by linear ridges radiating  out from the central plateau. One prominent pair of parallel ridges trends ENE-WSW and controls the north-west and south-east sides of the atoll, and there are weaker lineaments parallel to the other two sides. Other strong features radiate diagonally from its northern, southern and western corners. None of these directions is expressed in the regional trends of the Samoas. 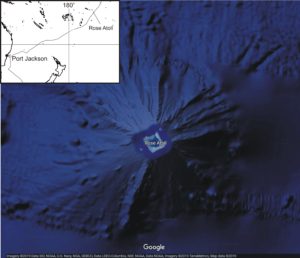 Today the atoll is the centre of a US National Monument and National Wildlife Refuge that covers some 35 sq km of the Pacific. Because of its importance as a nesting site for a variety of seabirds, it is in principle completely closed to all except duly accredited scientists, but its remote location make this very hard to police. Cameras set up to monitor sea-bird activity occasionally record illegal visitors, and in 1993 a Taiwanese long-line fishing vessel ran aground, probably while attempting  to steal some of the giant clams for which the reef is one of the few remaining refuges. It cost the US Fish and Wildlife Service $1.3 million and ten years of effort to remove the wreck and associated debris, but latest reports are encouraging. Three-quarters of the corals have recovered and a quarter of the invasive algae have gone. One feels that Rose would have been happy about that, and also very happy to know that, amongst all the numerous names given to islands, bays and headlands by Louis de Freycinet to commemorate people who were on board the Uranie, the name of Rose Island is one of the very few to have survived.