The hope of rescue

The Hope of Rescue

It had been what passes in the Falklands for high summer when the Uranie struck a rock off Volunteer Point at the entrance to Berkeley Sound, and It must have been not just depressing but very frightening for the castaways to watch the days shortening and winter drawing ever closer. In the end, however, it was winter that gave them their first sight of a potential rescuer, because its onset was driving the whaling and sealing fleets north. From the middle of March onwards there was a steady procession of vessels visiting the Falklands, either on their way further north or intent on staying there and spending the winter turning blubber into oil. Exactly 200 years ago, on 19 March 1820, an American sloop named the Penguin entered Berkeley Sound. On it was its owner, a New Englander called Hamond, but it was just one of a small fleet engaged in whaling and sealing out of Salem, Massachusetts. Rose and Louis learned that a much larger vessel, the General Knox, was moored off West Point Island, in the extreme north-west of the Falklands, where seal and whale blubber were being rendered into oil. Louis immediately decided to send Dubaut, one of the élèves, to it to negotiate the rescue of his crew and cargo.

Today, anyone in Rose’s position would probably have assumed that rescue was assured, but she, although overjoyed, was less sanguine.

…….  I am not sure yet whether the whaler will take us, but ….. if I am to be disappointed, at least these few days of false hope will be less painful than they would otherwise have been. I had begun my letters so that the boat would carry them, but I leave them all until further notice, with all the more pleasure since I prefer to write to you from a place where we are safe than from a country where you might suppose us more unhappy than we really are. [FL687061]

She was right to be cautious. Dubaut would surely have been pleased at his captain’s confidence in him, but he might have come to regret it. The journey was horrible, his reception was less than enthusiastic and his mission was ultimately unsuccessful. On board the Penguin, the stench of the cargo of recently slaughtered sea-lions was appalling, and oil from the carcasses stacked on deck oozed through the planking into the ship’s interior, including the captain’s cabin where he had been given space to sleep. 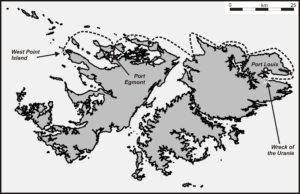 Dubaut’s journey: the exact places where the Penguin stopped are no known, but they would generally have been in sheltered bays. The first stop was probably in Volunteer Cove, because the weather when the sloop left and Hamond was forced to shelter only a short distance beyond the entry to Berkeley Sound

Nor had Hamond any intention of allowing the plight of a few stranded foreigners to interfere with profit, and the journey to the General Knox was delayed by the need to pick up groups of sailors and their catches. It took ten days for the Penguin to reach Port Egmont in West Falkland, still well short of their final destination, and there they encountered a Scottish brig whose captain, James Weddell, was to become famous as one of Britain’s earliest and most effective Antarctic explorers. He was there to fill the spaces still remaining in his holds with seal oil, after hunting whales further south and, according to the Americans the Scotsmen were not very good at what they were doing. Hamond made a brief visit to the brig, but did not allow Dubaut to go with him, and what then took place is known only because Weddell wrote about it later.

The sloop, on her way, passed through, and anchored in Port Egmont, and the master, who was the chief mate of the ship, came on board, but did not mention the wreck, or that he had a French officer along with him: on the contrary, he cunningly prevented this officer from calling upon me, evidently for the purpose of avoiding competition in getting the passage-freight for these unfortunate people. [Weddell: p98]

If Dubaut’s suspicions were aroused by this incident, they must have been amply confirmed when the Penguin arrived at West Point Island and he was prevented from meeting Captain Orne, who was in charge of the entire operation, until Hamond had seen him first. When they finally did meet, Orne was evasive and unfriendly; he must, he said, consult with his officers about the action to be taken, and he needed to get them all together. Eventually, a meeting was convened.

It did not go well, and that was largely thanks to Hamond, who loudly protested the cost of any rescue. He claimed that the fleet would easily be able to fill 4000 barrels with whale oil, and that even if they got only 3000 barrels, or 90,000 gallons, their a cargo would be worth $45,000, the equivalent of almost half a million dollars today. He ‘generously’ subtracted the value of the oil that had already been collected, but then added $12,000 for 4000 seal skins that would not be collected, at three dollars each. Exactly what he was prepared to see Orne offer in exchange for this exorbitant sum is not clear, but it could only be justified by assuming that the rescue operation would put an end to the fleet’s operations for at least a year. That would which would have been more than enough time for everybody and everything from the Uranie to be transported all the way back to Europe and for the General Knox to then return to the Falklands. Even Orne considered the price excessive, as it would have been. When the General Knox returned to Salem in June 1821, without having done anything for the Uranie, it was carrying 5000 seal skins but only 600 barrels of oil.

Eventually Orne said he would be content with a ‘mere’ $25,000, but Dubaut, sensing that he might come down even further, suggested that he come to Berkeley Sound to talk directly to Louis. By the time they got there a competitor had appeared, in the form of an American gun-runner in desperate need of the help that Louis and his carpenters could provide, but even so another month was to pass before Rose was finally able to say farewell to Berkeley Sound.