The gold of the Rand

The Gold of the Rand

So, the frenzy of the Brecon & Radnor by-election is now behind us and we can all move on. A frenzy, it has to be said, that was more apparent in the pages of the national press than it ever was here on the ground in East Radnorshire. Faced with a line-up of five of the most lack-lustre prospective MPs ever presented to voters in what was billed as a crucial by-election, almost the only possible response was a deep yawn. When put to it, only Candidate #6, Lily the Pink of the Monster Raving Loony Party, spoke anything approximating to good sense, and actually answered questions directly.

How then to choose (in the only choice that could conceivably make a difference) between a candidate that no-one had ever heard of and another of whom, since (but only since) his inability to work out his expenses led to a Crown Court conviction, one has heard altogether too much. How to choose, in a constituency where most people expect to at least be able to recognise their MP when they meet him or her in the street, between a candidate who sought recognition chiefly by riding to hounds and another who had been parachuted in from outside. Still, dutifully, we went to the hustings to hear what they had to say.

Not, sadly, very much. It is surely long past the time when politicians of all stripes should have realised that avoiding questions by dredging back into the past in order to blame the other side for everything that has ever gone wrong only angers most voters. That they haven’t realised this suggests that they are not actually very bright, and the disgraced Conservative candidate distinguished himself by dredging back even further than most. Blithely ignoring the fact that a significant part of his audience had not even been born when the decision was made, he decided to blame the country’s parlous finances on Gordon Brown’s decision, twenty years back, to sell off rather more than half the country’s gold reserves.

Ayn Rand would also have been shocked, had she lived long enough to see it happen. For her, gold had an almost mystic significance, As the only sure foundation of a stable economy and,the only way of ensuring worth in trade and exchange, it had to be used in even the smallest of transactions. When Dagny Taggart, heroine of ‘Atlas Shrugged’, was stranded in the Kansas wilderness,* she asked her former employee and new-born ‘rational’ revolutionary Owen Kellogg, to sell her a packet of cigarettes. It was a plain paper packet, marked only with the US dollar, the symbol of the resistance, and she was told that its price was just five cents. But in gold.

Reasonably enough, not having any gold with her, Dagny asked for the rate of exchange, only to be told that there was none, because no amount of the currency whose value was decided by the (fictional) government of the United States would buy those cigarettes. It is here that Rand had a problem that she seems not, in this and many other places in ‘Atlas Shrugged’, to have even have recognised. She wanted to use gold as her guarantee of value, but she also wanted to quote prices in dollars and cents, because for her the US dollar represented the pinnacle of human achievement. However, she could only have gold and the dollar working in harmony if a dollar would buy a fixed weight of gold or, to look at it from the other end, a fixed weight of gold represented a dollar.

Rand had, of course, had direct experience of such a system, and little experience of anything else. From the time of her birth in 1905 until the end of the First World War, an ounce of gold had been worth a fraction less than $19. There was then a brief period of chaotic post-war fluctuation, but by 1924 gold had stabilised at between $20.60 and $20.70 per ounce, and there it remained until the stock-market crash of 1929. There followed a second chaotic period, which lasted about five years, and by 1934 the price of a golden ounce had risen to about $35, or about $1.125 per gram. There it stayed until 1967, ten years after the first publication of ‘Atlas Shrugged’ . It was, of course, a rate that could only be maintained, with considerable difficulty, by the sort of governmental intervention Rand so despised. It would have made Kellogg’s 5 cents equal to about 3 mm of gold wire one millimetre in diameter. Not the most convenient thing to find in the bottom of one’s purse. 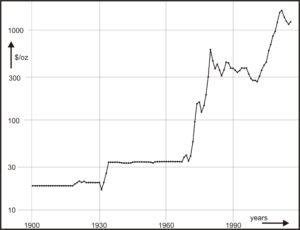 The price of gold in the 20th Century. A logarithmic scale is used because it is percentage rather than absolute changes that are of interest to investors. Even with this type of presentation, the variations since 1970 have been spectacular.

To be fair to Rand, the problem of small change was one that she did anticipate. When, on p671*, Dagny encountered the Mulligan Mint that was making the golden dollars for the rebels, she learned that it was also minting lesser coins in silver, but this only made the unrecognised problem worse. Not only had there to be a fixed exchange rate between the dollar and gold, but there had to be a fixed exchange rate between gold and silver. Who was to decide what they should be? In the rebel utopia of Galt’s Gulch, it was presumably Midas Mulligan who decided just how much his golden dollars would weigh, but he had no means of enforcing that decision on anyone else. If there was too much gold around, people would simply buy gold cheaply and mint their own dollars, and Rand’s whole philosophical system was built around the rejection of any of the controls that could prevent them from doing so.

The opposite situation, where the coinage metal is in short supply, has sometimes also occurred, with predictable consequences. When Isaac Newton was master of the London mint, the British currency contained silver worth more than the face value of the coins, which were being bought up wholesale and exported to the continent. The mint couldn’t keep up, the situation could not last and, of course, it did not.

The main argument for gold as a store of value is that it is impossible to counterfeit. A bar of gold is a physical testimony to the cost in effort and energy (and pollution and environmental destruction) that went into producing it, but these are very far from having any direct relation to the weight of the bar. The man who uses a metal detector in the back streets of Kalgoorlie to find a nugget of gold weighing several ounces has, on that day at least, expended an almost negligible amount of effort for a very good result, although who is to say how many fruitless days preceded that one lucky strike. In the dying days of $35 gold, when as a rough rule of thumb we reckoned in Australia that any deposit of any mineral that contained $10 worth of value per ton could probably be mined at a profit, my work took me to Noble’s Nob in the ‘red centre’, where one of the workers at the crusher pointed to the belt bringing in what he described as ‘2 -3 ounce dirt’. That dirt was worth $60 to $100 per ton, and there were rumoured to be blocks in the mine, kept in reserve for when the run-of-mill dirt was a little lean, that averaged several hundreds ounces to the ton. The Nob was a very profitable little mine. At the other end of scale, today’s largest  gold mine, at Muruntau in the Kyzyl Kum desert, produced about 2.4 million ounces of gold in 2018, from ore that averaged less than a tenth of an ounce of gold to the ton.

What Rand seems to have been unable to recognise is that gold is just a commodity. Like any commodity, its price can be controlled for limited periods by employing one or more of the resources that the state has at its disposal (hanging, drawing and quartering being favoured in Newton’s day) but eventually reality will intervene. In the years since 1967 the price of gold has increased almost fifty-fold. Gordon Brown, who believed that he was an economic rationalist, thought it was overpriced in 1999, and by any rational criterion it was (I have argued elsewhere that we should stop mining the stuff altogether, except as a by-product), but that didn’t stop his call being the wrong one. The market is not rational because human beings are not entirely rational, and it is a mark of the stupidity of Ayn Rand that she believed that there were some human beings who were, and who were therefore uniquely qualified to rule the world.

*Note: For those who want to find this story in a copy of ‘Atlas Shrugged’, my copy is the Penguin 35th Anniversary edition, in which Part 3, “A is A” begins on page 647. The Taggart-Kellogg conversation is on page 631.