One of the main products of the Uranie expedition was Louis de Freycinet’s massive six-volume centrepiece to the Voyage autour du Monde entitled simply Historique. In it he provided a narrative of the voyage, and where significant events occurred when he was not present he used accounts prepared by other people. Whenever he did this,  except in one very special case, the extracts were enclosed in quotation marks and credited to the person concerned. He could not, however, do this for his wife Rose, because she was not supposed to have been on board, and in 1825, when the first volume of the Historique was published, her presence throughout the voyage was still a taboo subject. Did she make any contribution?

She did, as we know, keep a journal, and Louis could have found plenty of information in that, but there is no evidence that he did so. The notebooks were given to Caroline de Nanteuil, the person for whom they were intended, soon after Rose returned to France, and it was not until 1910 that Caroline’s grand-daughter, deciding that they should be preserved in the Freycinet family archives,handed them to Baron Henri de Freycinet, grandson of Louis’ elder brother Henri. A comparison between the journal and what Louis de Freycinet wrote in the Historique does not suggest that he made any direct use of what the journal contained.

But there was  another possible source for him, in Rose’s letters to her mother, and these would have been much more accessible. For some of the time that the couple spent in Paris after the voyage they were lodging with Madame Pinon, so the letters could easily have been consulted. Today, If they still exist, their whereabouts are unknown, but there are copies, and these were purchased by the Mitchell Library (a part of the State Library of New South Wales) in 2010.  With them came a brief summary prepared by Hordern House, which handled the sale; They said

“While the original letters did not survive, Louis had copied these out after Rose’s death in 1832, possibly after realising their value, to prepare them for publication. These do appear to be, from evidence within them, close transcriptions of the originals.”

It was these copies that Duplomb and the Baron used to fill the gaping hole in the journal where it failed to cover the voyage from Timor to Sydney via Lawak, Guam and Hawaii.

In the course of handling the journal, the editors made transcriptions which they then annotated copiously, and these were purchased some years ago by the National Library of Australia. Happily, the library has placed them on-line, so we can see what the editors actually did. 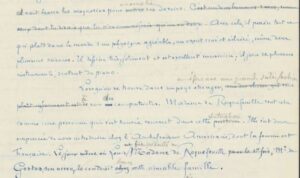 Figure 1. Extract from the Duplomb transcription of Rose’s journal. The penciled alterations and deletions were all carried through to the version of the text published in 1927, and some additional amendments were also made.

They were brutal. While their omissions of sometimes extensive sections of the journal that did not meet their approval might be understandable (the sections dealing with Rose’s opinions of members of the prominent Desbassayns family of Réunion came under particularly heavy attack), the assault on Rose’s grammar, syntax and choice of words is less forgivable. Unfortunately this mutilated product remains the basis of the most recent published versions of the journal, in both French and English.

As for the letters, the Mitchell library that has placed images of the copies on-line, and these to show them suffering a similar fate. Editorial amendments abound, although much more common in some places than others. The last of the letters, which Rose entrusted to reliable friends just before the Uranie left Sydney, was treated especially severely. 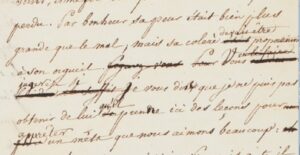 Figure 2. Extract from the Letter 15 in the Mitchell Library collection of Rose’s transcribed letters to her mother. The positioning of some of the alterations and deletions relative to the remainder of the text clearly shows them to have been made as the text was being transcribed..

Whoever it was that transcribed the letters, it was clearly not the same person as transcribed the journal. The handwriting is completely different. Horden House said that the letters were transcribed by Louis, and fortunately there are many examples of his handwriting on the internet, Back in Canberra,  the National Library has placed his manuscript transcription of a letter he received from Joseph Gaimard when he was on the Astrolabe with Durmont D’Urville in 1828.

Figure 3.Top : Part of Louis de Freycinet’s transcription of Joseph Gaimard’s Letter 14, written in Hobart, Christmas 1827. Placed on-ine by the National Library of Australia.   Middle: Part of the transcription of the letter Rose wrote to her mother from Rio de Janeiro, including (in what looks very much like the same hand) a marginal note describing the contents of the selected paragraph. Placed online by the Mitchell Library. Bottom: A part of Rose’s diary, placed online by the Mitchell Library.

To the untrained eye, the handwriting in the upper two extracts in Figure 3 looks almost identical. If they were written by different people, only an expert would be able to tell, and such a person might well also conclude that one of the writers was deliberately trying to imitate the writing of the other. Why would anyone want to do that? Neither handwriting is a good match for Rose’s, shown in the third extract. It seems as if Hordern House were right. The transcriber of the letters was Louis.

But if they were right about that, were the also right about the date? Were the letters indeed transcribed by him because he was contemplating their publication as a last tribute to his beloved wife? Or were they, in fact, published while she was still alive?

On the 34th page of the booklet into which the transcripts have been bound, Rose wrote to her mother describing her shock at being told (by Louis) that the singers in a church service in Rio were castrati.

Louis, in the, Volume I, p 34, of the Historique, first published in Paris in 1825, described the same event:

The only difference between these two accounts is in the sentence highlighted in bold. Otherwise, one is a copy of the other, and this is not an isolated instance but a common one. There can be little doubt that the original was the one written by Rose (a later reference to the writer ‘blushing’ seems to confirm that) and that Louis was the copyist. But not in preparation for a never-to-be published eulogy for his dead wife, but in preparation for the incorporation of selected parts of what she wrote into the Historique.

And Duplomb and the Baron? Did they decide that since Louis himself had already done the editing while he was transcribing, they could let the text go almost unmolested? It seems plausible. They were, it seems, hesitant about meddling with it ONCE IT HAD BEEN PREPARED BY A MAN.