In one respect it seems that Ayn Rand was ahead of her time. She anticipated fracking.

After crashing (quite literally) into Galt’s Gulch, Dagny Taggart was given the tour, and one of the first stops was at the new field operation of Wyatt Oil.

…..it was a wall of laminated rock with a complex chain of pipes, pumps and valves climbing like a vine up its narrow ledges, but it bore, on its crest, a huge wooden sign— and the proud violence of the letters announcing their message to an impassable tangle of ferns and pine branches, was more characteristic, more familiar than the words: Wyatt Oil.

It was oil that ran in a glittering curve from the mouth of a pipe into a tank at the foot of the wall, as the only confession of the tremendous secret struggle inside the stone, as the unobtrusive purpose of all the intricate machinery— but the machinery did not resemble the installations of an oil derrick, and she knew that she was looking at the unborn secret of the Buena Esperanza Pass, she knew that this was oil drawn out of shale by some method men had considered impossible. (Atlas Shrugged, Penguin anniversary edition, p. 365)

So far, so very Twenty-first century, but in almost every other respect Rand was not modern at all. Even though commercial air transport was well established in the 1950s, air travel in ‘Atlas Shrugged’ is reserved for the favoured few, aircraft seem to be built individually, almost by hand (their mass production during World War II seems to have passed Rand by) and rail is still king. What Rand hankered after, in fact, was not an imagined future but an imagined past, of commercial enterprises run by individuals, dealing directly with other individuals, and investors with personal knowledge of the companies in which they were investing. A world not even as recent as the lost world of the Imperial Russia of her youth, but one more akin to the much earlier world of the Hanseatic League, the bankers of Florence and the traders of Venice. And because of that blinkered approach, Rand was incapable of asking herself one very simple question.

Who or what was Ellis Wyatt producing his oil for?

John Galt had already built his machine to extract energy from the Earth’s electric field at almost zero cost. What place in such a world would there be for such an antediluvian figure as an oil baron?

The real modern world is, of course, a very different place, and as Vladimir Putin is intent on demonstrating, oil and gas are still king and queen. Europe is learning this to its cost as gas prices double and double again. And in the UK, predictably, that crisis has led to calls by Jacob Rees-Mogg and Andrew Neil, among many others, for fracking to be reinstated as a potential solution to the country’s gas supply problems. Neil summarised the argument well.

The solution has been under our feet for more than a decade. Britain sits on some of the world’s richest reserves of shale gas. The Bowland Field in Lancashire harbours 37.6 trillion cubic metres of the stuff. Even if we were to extract only 10 per cent of it — through a process called fracking — we’d have enough gas to be self-sufficient for 50 years.

Now, there is much to be said about fracking, both for and against. It is a major contributor to the extraction of as much of the resource as possible from conventional oil and gas fields, and wells drilled exclusively to be fracked for oil and gas have revolutionised the energy scene in the United States. It has its downsides, of course, and most of these have been well rehearsed, but there is one that does seem to have been rather overlooked. As far as the UK is concerned, fracking would simply not be up to the job.

Figure 1. An intensively fracked area in the United States. A very different operation from the one envisaged in ‘Atlas Shrugged, because the real-world industry has not yet been able to dispense with the drilling rig. Fracking is regarded in the industry as ‘unconventional’, but not that unconventional! The reason a fracked area looks like this is that a single fracked well is a very small producer. Given its relatively low population density, it is possible to find places in the US where development on this scale is acceptable. It is hard to imagine anything like it being acceptable anywhere in the UK, but to make the numbers work, it is the sort of thing that would be required.

First, the consumption side. The most recent year for which full statistics are available is 2015, and in that year the UK consumed 2543 bcf (billions of cubic feet) of gas and produced 1675 bcf, all of the latter ‘conventional’ and nearly all from offshore fields. Bizarrely, 502 bcf of the production was exported and as a consequence the country had to import almost 1600 bcf. Since 2015, consumption has increased to almost 3000 bcf per year, but to be kind to fracking’s lobbyists, let us stick with a net import total of about 1000 bcf and think about what would be needed to replace it.

That requires consideration of the supply side.

Figure 2. Hypothetical production curve for a Marcellus Shale gas well with initial production rate of 2 Mmcf/day. Extrapolation of this graph indicates that it would take roughly ten years for cumulative production to reach 1 bcf, with about 40% of that being achieved in the first year.

Because fracking has no track-record in the UK, we have really no idea what a single UK well would produce, but it cannot be unreasonable to take the most productive US shale as a model. This is the Marcellus shale, and the production pattern for a ‘typical’ Marcellus well with an initial production rate of 0.002 bcf (2 Mmcf)  per day is shown in Figure 2. The decline in production is very rapid, and about 40% of the total production, equal in this hypothetical, but actually quite unusually productive, example to about 0.4 Bcf, has been delivered by the end of the first year. It takes a further ten years for the total production to reach 1 Bcf, but in the US very few wells remain in production for this long. 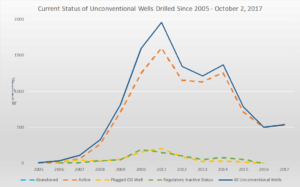 Figure 3. Annual totals of wells drilled for gas production in Pennsylvania in the Marcellus Shale.

Figure 3 shows that in 2016, the peak year for drilling in Pennsylvania, almost 2000 wells were drilled in the roughly 50,000 square kilometres of the state in which the Marcellus shale could be considered prospective. However, Figures 2 and 3 do not tell the whole story. Very few wells produce for anywhere near ten years before being plugged and abandoned and, as shown in Figure 4, in Pennsylvania before the current leap in gas prices, many were being plugged after only a year in production. Producible gas is left in the ground by early shut-down, but to extract it at a later date either the well would have to left unplugged, with the site on care and maintenance, or a completely new well would have to be drilled. 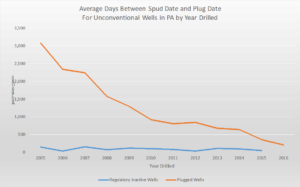 Figure 4. Productive lifetimes of wells drilled for gas production in Pennsylvania in the Marcellus Shale.

The 50,000 square kilometres of Pennsylvania prospective for the Marcellus shale is very, very roughly, equal to the area of the island of Great Britain that might be considered prospective, according to a map issued by the British Geological Survey. The error bars on the estimates in the caption to thFigure 5 are map are clearly enormous, but even the lowest estimate suggests that fracking could give the UK energy security for 50 years. Except that …… 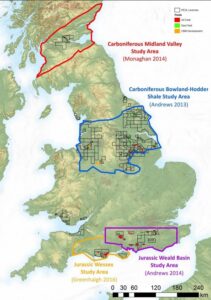 Figure 5. British Geological Survey map of areas possibly prospective for shale gas in the UK. Estimates quoted by the survey of the gas in place vary between 2281 tcf (trillion cubic feet) and 140 tcf, but these are estimates of gas in place, not gas recoverable.

………  these are estimates of gas-in-place, not gas producible. Average recovery rates used in global estimates (https://www.eia.gov/analysis/studies/worldshalegas/pdf/overview.pdf) are of the order of 20%, so in one respect Andrew Neil was being pessimistic when he talked of extracting only 10% of his unreferenced 37.6 tcm (a mid-range estimate, equal to 1327 tcf). However, that 20% refers to extraction of the area potentally drainable by the well concerned. Even with the density of drilling shown in Figure 1, it is probable that no more than half of the area of the ‘field’ is actually being drained. At 20% recovery and on the lowest (but most recent) estimates, the entire north of England shale basin might be capable of supplying UK demand for less than ten years. Even that could not be assured, because much of the area is geologically complex, much more so than the Marcellus, the most productive formation in the US. The information on which to make proper estimates for the UK simply does not exist, and here I would agree with the critics of government policy. Cuadrilla drilled two wells designed from the outset to be fracked, but these have never been tested and are now to be plugged and abandoned, in response to Government pressure. A very real opportunity for injecting some hard fact into the debate has been lost. However, it has to be said that one thing that Figure 5 does show is that  large parts of the prospective areas are densely populated. In such areas drilling is likely to be strongly resisted and may be impossible.

Put all this information together, and it seems that to rely on onshore fracking make up the current UK shortfall in gas would require the drilling of about two and a half thousand wells in the first year, and between one and two thousand wells in subsequent years.

In view of this, s it conceivable that the dreams of Ayn Rand, Andrew Neil and Jacob Rees-Mogg could be realised on our tight little island?

I don’t think so.