The boats of the Uranie

No sailing ship ever went to sea in the 18th or 19th centuries without boats, either on board or in tow. They were used for transfers between ship and shore and very often also for survey work in shallow waters. In an emergency, they could also be used as lifeboats. After the wrecking of the frigate Méduse in July 1816, in which nearly of all the roughly four hundred men on board died, including most of the hundred and fifty who sought safety on a makeshift raft, neither the French Ministry of Marine nor the Bourbon monarchy could afford a second disaster, and that must have been in the minds of everyone involved in the fitting out of the Uranie. Oddly, in none of the equipment lists that I have seen so far, which meticulously detail the supplies and provisions taken on board, is there any mention of these boats, although the possibility of their being needed in an emergency was clearly recognised. On page 5 of the first volume of the Historique, Louis wrote:

Having only one vessel, and finding myself naturally obliged to recognise the disasters that might happen on a long voyage in still poorly known regions, I gave preference, other things being equal , to men who were both sailors and craftsmen: in consequence, out of the one hundred and twenty men of which the crew of Uranie was composed, at least fifty could exercise, if necessary, the useful skills of carpenter, chandler, sail-maker, blacksmith, & c.

On occasion these specialists were much needed to repair and modify the boats, but of the boats themselves all that seems to have been recorded, and then only in passing, is that there were at least four. Between them they might have been able to accommodate the entire crew and état-major, although it would have been a very tight squeeze. They were:

La chaloupe [Duplomb p185]; also referred to as la petite barque [Historique Vol VI: p1246] or la yole [Historique Vol V: p1234]. On a British ship of the time this would have been known as a launch (a designation that was soon to be transferred to small boats with engines), a cutter (designed for speed rather than capacity) or a longboat. It was undecked and could carry sail, and was the boat of choice for Duperry on his independent charting missions.  In the Falklands Louis set his carpenters to work adding decking to this chaloupe in preparation for a journey to Montevideo by a carefully selected crew, but the arrival of the Mercury in Berkeley Sound made this unnecessary and instead he presented the boat to James Weddell. 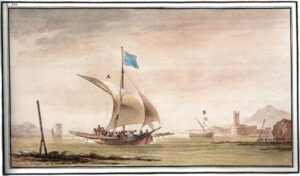 The grand canot [Historique vol I: p454]. Often used for survey work, there must have been two of these with the Uranie, since on p544 of Volume III of the Historique Louis referred to ‘la chaloupe et les deux grands canots’. One was probably the boat also known as  Le canot du Commandant [Gaimard: p275], or captain’s gig., They could carry sail as well as being propelled by oars and one of them was used for the excursion to Dirk Hartog Island. 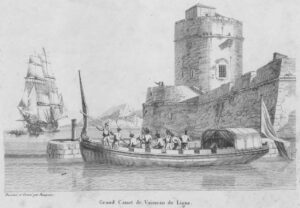 The 19th Century ‘Dictionnaire de marine à voile’ lists, in addition to le grand canot, which was described as being ‘used for the heaviest transport but smaller than a chaloupe’, le petit canot, le canot du commandant, the canot reserved for the état-major and le canot de la provision for the ships’ stores. As far as the Uranie was concerned, the second grand canot might have been considered as filling either or both of these last two roles, although neither term was used. A petit canot is mentioned occasionally, but without anything by way of description. Corresponding to the British ‘jolly boat’, there could have been more than one of these on the Uranie.

One type of boat that seems not to have been used in the French navy of the 1820s was the whaler, distinguished by the fact that it looked the same from either end. This was a useful feature in sealing or whaling, where the boats were often drawn up on beaches and did not have to be turned around in order to take to sea again. It could also have been a useful characteristic on scientific expeditions, where there was always the possibility that a landing party might return very hurriedly, pursued by indignant villagers, but there were always some sailors left with the boat, whose first task was presumably to ensure that it was pointing in the right direction.