The Aves Ridge and the migration of mammals

About fifteen years ago I was one of a group of geologists and geophysicists evaluating the hydrocarbon potential of Jamaica for the country’s Petroleum Corporation. We were a pretty disparate lot but had one thing in common. We had all done our time working in Indonesia.

One thing led to another, and a few years later I found myself at a meeting on Caribbean evolution held in Siguenza, in the middle of Spain, giving a presentation on the similarities and differences between Indonesia and the Caribbean. I came away confirmed in my entirely uncontroversial opinion that both areas were extremely complicated, and that although there were some fairly obvious similarities, there were also, on closer inspection, some very major differences. This was especially true of the extreme eastern parts of the two regions, and a part of my presentation dealt, rather superficially, with a comparison between the Weber Basin in Indonesia  and the Grenada Basin in the Caribbean.

The extreme easts of (a) Indonesia’s Banda Sea, and (b) the Caribbean. The horizontal scales are the same, and the depth contours in metres. The contours relating to the shading in (b) are of depth to basement. Illustration from Milsom, J. (2009) The Caribbean: an oroclinal basin?  Geological Society, London, Special Publications, 328, 139-154

I was reminded of this very recently, when the November 19 issue of Eos arrived in my inbox. The leading article, entitled “By Land or Sea: How Did Mammals Get to the Caribbean Islands?”, authored from within the GAARAnti group, told me something that Charles Darwin had been the first to point out and of which I had been blissfully unaware. Except for some very recent introductions, the mammals of the Greater and Lesser Antilles are of exclusively South American origin. The question addressed by the authors (Philippe Münch, Pierre-Oliver Antoine and Boris Marcaillou) was of how they got there, and it was being asked as part of a far wider and very inter-disciplinary project. The GAAR stands for Great Arc – Aves Ridge and the project is built around the idea that, back in the Eocene, the Great Arc of the Caribbean (Cuba, Hispaniola, Puerto Rico and many smaller islands) and the Aves Ridge were parts of a single continuous terrane, GAARlandia.

That idea sent me back to my old gravity maps of the Caribbean. None of them showed the area in the detail I wanted so, using the latest gravity grids produced by David Sandwell and his colleagues I drew up some new ones. 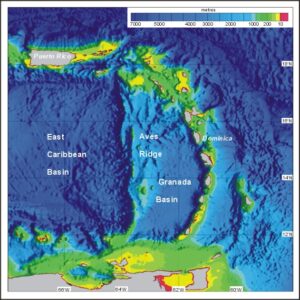 One of the problems with the GAARlandia idea is very obvious from the bathymetric map. Rather than there being present-day continuity between the eastern end of the Great Arc, represented by Puerto Rico and the Virgin Islands platform, and the northern end of the Aves Ridge, the two trends are almost precisely at right-angles to each other. Added to that, it is not even that easy to decide what one means when one talks of the Aves Ridge. Is it the narrow N-S feature at about 63.5°W, as the strict definition of ‘a ridge’ would suggest, or the much wider area of complex bathymetry north and west of the Granada basin where the sea floor is generally at depths of less than 1000 metres? All of this would, it seems, necessarily have been part of GAARlandia.

The free-air gravity map makes these points even more strongly, because the gravity field is somewhat more sensitive to dense basement rocks than to the overlying sediments that obscure some of the details, and also because free-air gravity from sea-surface altimetry emphasises features with principal linear dimensions in the 10 – 100km range. The very complex bathymetry of the sea-floor between the eastern termination of the East Caribbean Basin and the northern part of the Lesser Antilles Arc (north of the latitude of Dominica) is more obvious, as is the division of the arc itself into an older, inactive, eastern strand and a younger and currently volcanically active western strand. 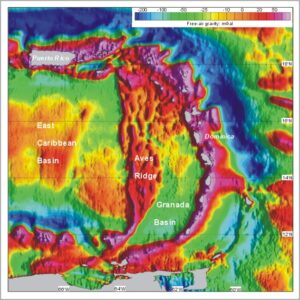 What this map suggests is that there are now two separate and distinct geological provinces in the region between the Antilles Trench and the steep subsea slope down into the East Caribbean Basin. The southern province consists of a complex but relatively coherent Aves block that narrows to a single ridge at its southern end, plus the deep Grenada sedimentary basin and a single-strand Lesser Antilles Arc. In the northern province the basin has disappeared, there are two strands to the arc and the ‘ridge’ has morphed into a complex of narrow, generally N-S trending, ridges and troughs. There are no obvious features in the oceanic crust of the adjacent part of the Atlantic that could have given rise to this pattern as they were being subducted. It must, it seems, be largely, if not entirely, a product of the internal tectonics of the Caribbean Plate. As, of course, all those directly involved in the project will have realised, without my having to point it out to them.

What interests me personally about this situation, because of my background in a quite separate part of the world, is whether I can see a way in which this pattern might have evolved from something rather similar to the pattern around the Weber Basin, even though this is currently forearc to the Banda volcanic arc whereas the Granada Basin is back-arc to the southern part of the Lesser Antilles volcanic arc. If I get anywhere by following that train of thought, I will undoubtedly blog about it .

Before leaving this fascinating area, there was one other map I felt I should make. Marine Bouguer gravity is a highly suspect quantity, since it relies on using as a correction the gravity effect of a mass of rock that never has existed and never could exist, but it has one satisfactory aspect. Just as Bouguer gravity on land is a sort of proxy for crustal thickness, so is Bouguer gravity at sea. High values equate to thin crust, and oceanic crust is typically associated with values in excess of +300 mGal. The East Caribbean Basin has some of the thinnest oceanic crust on Earth, and the high values of Bouguer gravity there are only to be expected. 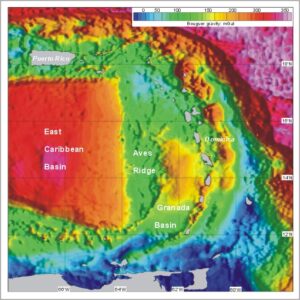 And, talking of beasts, the Eos paper that started me down this track was all about the migrations of two mammal varieties, the Antillean sloths, already in the Greater Antilles and differentiating at 34 Ma, and a group of chinchiloid rodents found fossilised in lower Oligocene sediments dated to around 29.5 Ma. These dates are much too early for the present Lesser Antilles Arc to have played any part in their perigrinations. Even today there are gaps between some of the islands that would present formidable obstacles to migration north from the South American mainland, and at the times in question that arc was in the very earliest stages of its development and the gaps would have been much bigger. What the GAARanti group are testing is the idea that it is the Aves Ridge that might at one time have provided a land-bridge between South America and the Great Arc.

Land bridge or accidental rafting? The existence of the isthmus of Panama is clear evidence that volcanic activity can form a narrow land bridge in the right circumstances, and rafting has always seemed a difficult option for largeish animals. The primates, despite being among the most active and innovative of all orders of mammals, have notably failed to cross the quite narrow but deep strait between Bali and Lombok. Only in Sulawesi, where an Australasian land-mass has blundered into an Asiatic one, does the the marsupial cus-cus share its forests with monkeys. The larger the mammal, the more substantial the raft required, and the sloths that reached the Great Arc were not only quite large but, like all their relatives, would have had quite exacting requirements as to diet. They could not have survived very long on a raft, but they might have had one thing in their favour. Any raft that carried a pregnant female north would probably not have had to be beached to allow her to scramble ashore. She could have swum.

In January 1818, two aï sloths were acquired by the surgeon-naturalists on the French corvette Uranie, in Rio de Janeiro at the start of a planned scientific circumnavigation of the globe. The junior surgeon, Joseph-Paul Gaimard, recorded in his diary that the male, having climbed all three masts in search of the right sort of leaves “went down the stern ladder and, after touching the water with one of his paws, voluntarily let himself go: we saw him swimming, holding his head high; his agility, if we can use the term, even surpassed what he had demonstrated in climbing to the top of the masts”.* There is no reason to suppose that the female would have been any less competent. Sadly, both male and female died when the ship’s supply of the only form of vegetation their stomachs could accept was exhausted.