When, in 1792, the Honourable East India Company decided to build an astronomical observatory in Madras, they entrusted the project to the established astronomer John Goldingham, and when it was completed they appointed him as its first official head. In ‘The Hunt for Earth Gravity‘ Goldingham makes an appearance because of the pendulum measurements he made in his observatory in Madras (modern Chennai) and the gravity link he established between there and London. These seem to have been the only measurements he made himself, but he made one other important contribution to the science. He arranged for the pendulum to be taken to a small island almost exactly on the equator off the west coast of Sumatra, and described what had been done in his ‘Experiments for Determining the Length of the Pendulum at the Equator’,  which occupied pages 101 to 358 of the Madras Observatory Papers published in 1827. Goldingham had no intention of going himself, nor did he believe that it was essential that ‘any gentleman who might go should have had a regular scientific education’. Instead he emphasised the need for

a general knowledge of the object of the Expedition merely, with the habit of overcoming difliculties which occur on Service in the Field, and а power of command to keep all proceeding with it in due order [Madras Observatory Papers: p105]

The two people actually selected rather exceeded this specification. Both had been trained in the East India Company’s surveying school under Goldingham’s direct supervision, and Peter Lawrence had then served for many years under William Lambton, who began the Great Trigonometrical Survey of India that George Everest completed. His companion, John Robinson, had actually taught at the surveying school while Goldingham was away in England. These were not amateurs, but that did not mean that it would be easy for them to get the data.

An essential first step was to secure the cooperation of the people on the ground, and there at least they were lucky. Western Sumatra close to the equator was at that time effectively controlled by the East India Company, and the man in charge was Stamford Raffles, an enthusiastic scientist and collector in his own right. When contacted by Goldingham, he replied

I have been much gratified by the receipt of your communication, and lose no time in assuring you of my most zealous co-operation and assistance. There are several small Islands to the Southward of Nattal, many parts of which must lie on the Equator, and I think you may have a choice of situations [Madras Observatory Papers: p101]

However, he did add a warning

I lament to say that our geographical knowledge, even of the Coast, is most defective – with the exception of Acheen Head, and Bencoolen, and perhaps Flat Point to the South, neither the Latitude or Longitude of any place along the whole line of Coast is laid down correctly ; I am endeavouring to supply the deficiency, but I am in great want of scientific assistance and get on but slowly – -The Poggy Islands [North and South Pagai] and Pulo Nias appear to be laid down not less than 40 miles to the Westward of their true situation, and no two Charts agree in the Longitude of the main Island to the Northward of Bencoolen – I mention this in order that your Observations may commence at Madras, and be brought on direct to Bencoolen [Madras Observatory Papers: pp103-104]

This makes clear one reason for Raffles’ enthusiasm. He was quite possibly not greatly interested in determining the shape of the whole Earth, but he was very much interested in the geography of his part of it, and this was a heaven-sent opportunity to get some mapping done by trained and competent surveyors.

Lawrence and Robinson left Madras on the 13th of March 1822 and arrived in Bencoolen (now Bengkulu) on the 18th of Aprii, and immediately set to work making astronomical observations. It was not until the 17th of June that they left for Natal in the brig Eleanor, somewhat incommoded by the ship’s cabin being ‘in possession of an Officer and his Family proceeding, it was understood, to Nattal, and the Hold was nearly filled with Bricks and Lime’, but were forced to return by appalling weather to Bencoolen, where they almost all went down with malaria [Madras Observatory Papers: pp112]. They left again on the 21st of July, landing at Tapanuli on the 9th of August ‘to the great relief of the Observers and Conductors of Stores, who had fared on board, in a way they had by no means looked for’, but it was to be more than a month before those ‘observers’ finally got to somewhere reasonably close to the equator, on the relatively large island of Pini, which they referred to as Pulo Pinee.

Even after they had reached Pini, a combination of terrible weather and the threat to the European settlements on the mainland from ‘The Padres, a sect of Musselman Fanatics’, delayed operations, and it was not until the 23rd of September that they were able to set up their tents and begin cutting down trees in a bay at the south-west tip of the island. They stopped doing this when their initial measurements showed them that they were still almost five minutes north of the equator, and instead began to investigate the islands to the east. There they found what they were looking for. It was an island that they called Gaunsah Laut and is now known as Pulau Anso, which they described as being ‘eleven feet above the level of the Sea, composed of sand seated upon a foundation of Coral, in length 365 feet and breadth 200 feet, distant from the main land about 10 leagues, with a good landing place, and suitable in every respect for making the Experiments upon’. Best of all, according to their estimate it was only a little more than 3 kilometres (108.78 minutes) north of the equator [Madras Observatory Papers: p114]. This may even be a slight, but only very slight, overestimate. 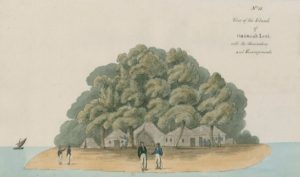 The camp and observatory on ‘Gaunsah Laut’ (Plate 11, Madras Observatory Papers). The artist’s name is not recorded and, since there is no mention of any such person having accompanied the expedition, the picture may have been drawn later  in Madras on the basis of descriptions supplied by the members of the expedition.

Even when they were established on the island, things did not go smoothly.

On the 11th, three of the savage Inhabitants of these parts, who came here under the pretence, or for the purpose, of fishing, got into the large Tent, and took from thence, the Transit Instrument, Azimuth Compass, Circumferentor, and a small box belonging to Captain Crisp; thinking, as it would appear, that the brass parts of the Instruments were gold. [Madras Observatory Papers: p114-115].

The ‘circumferentor’ was an alternative name for the surveyor’s compass.

Surprisingly this setback does not seem to have affected the operations very much, although the loss of the transit was much regretted because it left the observers entirely reliant on the sun for calibrating the various timepieces. From then on, and having noted that ‘some of the Islands adjacent to Gaunsah Lout, were now visited by a few of the savage inhabitants, under the pretence of collecting Turtle’ (why, one wonders, was this necessarily a pretense?), a system of nightly patrols was instituted, with an armed watchman circling the island from dusk to dawn. Given the small size of the island, a single circuit would not have taken very long. Sepoys were also sent to the neighbouring islands to search for the stolen goods, but without success.

The observations were begun on the 13th of February and were completed on the 26th of March, but it was not until the 4th of June that the observers  and their remaining instruments were safely back in Madras. They had been away for almost fifteen months, during which time their diet had consisted ‘chiefly of Salt Fish and Rice – with now and then a Fowl’‘. In that respect at least, things have not changed very much in the Sumatra forearc in the last two hundred years. In writing his report Goldingham placed great emphasis on the value that the geographical observations would have for future navigators in the area, and it seems safe to assume that in the eyes of many people it would have been those that made the whole operation worthwhile. They had not, however, been the reason for mounting  the expedition, and it is interesting to know just how accurately gravity had been measured. Thanks to much more recent surveys, the value of gravity on what is now known as Pulau Anso can be estimated to be about 978,093 mGal, with an error of no more than a few milligal, while the expedition’s final processed result, given by Francis Baily in vibrations per day of the pendulum beating seconds in London, was equivalent to 978160 mGal, an error of less than one part in a thousand. 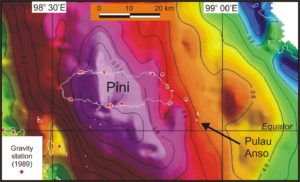 Gravity field of Pini and the surrounding seas, based on gravity-meter measurements at the coastal stations marked by red circles and free-air values calculated at the Scripps Institution of Oceanography from satellite mapping of the sea surface. Contour interval 50 mGal.

And the missed opportunity?  Mine, not theirs. In 1989 I hired a small boat in Gunung Sitoli, the ‘capital’ of Nias island, and set off with a LaCoste gravity meter towards the islands further south. Pini was our first landfall and we made measurements right around the island, wherever we could get ashore. If Lawrence and Robinson had not decided that Pini was too far from the equator for their purpose, and had remained in the bay they first selected, my measurement and theirs might have been made within a few feet of each other, but they didn’t. From that bay we (and presumably they) could see some small islands to the south-east, and we, like them, headed for them. My measurement was made on the first of these, but that was as far as we went. The value quoted above for gravity on Pulau Anso is based on that measurement and gradients estimated from the free-air values calculated by Dave Sandwell and his team from satellite-radar mapping of the sea surface, but it is only an estimate. If I had only known it, I could have closed a two-hundred year-old gravity loop. London-Madras-Pulau Anso-Madras-London!