From the 12th to the 14th of September this year the 15th Emile Argand Conference on Alpine Geological Studies is being held in Ljubljanan and on the final day of the conference I am down to give the keynote address. I shall be talking about the Philippines, and I shall be building my talk around the Tagalog mother and son deities Anagolay and Apolaki. How can that possibly be?

For any coastal state, the rights in the adjacent marine areas are matters of vital importance, and, in 1982, to bring some sort of order to what promised to be an area of extreme contention and chaos, the United Nations stepped in to obtain the agreement among its member states to a Convention on the Law of the Sea. Article 76 of the Convention stated that “the continental shelf of a Coastal State comprises the submerged prolongation of its land territory – the seabed and subsoil of the submarine areas that extend beyond its territorial sea to the outer edge of the continental margin, or to a distance of 200 nautical miles from the baselines from which the breadth of the territorial sea is measured”. The scope for interpretation and misinterpretation of this article was obviously immense, but there the matter rested for almost twenty years. It was not until May 2000 that the Commission on the Limits of the Continental Shelf that had been established under the convention began to take on a more proactive role by holding an open meeting to familiarise the states concerned “with the necessity to implement the provisions of article 76 and annex II to the Convention”. With representatives from fifty countries, the meeting initiated a decade or more of frantic attempts on the part of many of those states to establish their national limits by deploying arguments based on bathymetry, geology and geophysics. The Filipino geophysicist Jenny Barretto invited me to join the Philippines team. Our attention was focussed on the South China Sea, but we could not ignore the eastern side of the archipelago because we knew of the presence there of a massive subsea feature, then known as the Benham Rise, which almost, but not quite, breaks the surface. 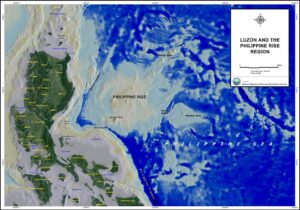 Figure 1. The Benham or Philippine Rise. Image generated by the National Mapping and Resource Information Authority of the Philippines (NAMRIA), downloaded as a public domain file via Wikimedia.

The project trundled on, and geophysics took a back seat to straightforward, but detailed, bathymetric mapping. For Jenny, who moved on to work for GNS Science in New Zealand, the more she learned about the Benham Rise, by this time re-named the Philippine Rise by presidential decree, the more she became convinced that she was looking at the world’s largest volcanic caldera. Despite the official renaming, the name Benham Rise, probably but not certainly commemorating an obscure 19th Century American admiral, refused to go away, so she decided that the caldera itself should have a truly Filipino name. She called it the Apolaki Caldera, after the Tagalog sun-god.

So far, so simple, but there is more to the story. When the Apolaki volcano was active, it was situated close to the spreading axis of the West Philippine Basin. We can deduce that because it is matched on the northeast side of that axis by a smaller, but still very definite, volcanic feature known as the Urdaneta Plateau. There is no problem in supposing that these were formed as parts of the same volcanic complex, centred slightly off-axis to the south-east, and everyone pretty much supposes that to be the case. 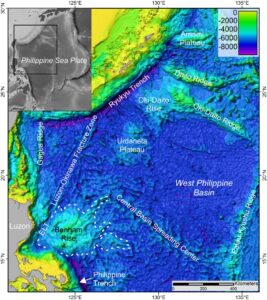 There is, however, a small problem, because beyond the Urdaneta there is yet another volcanic plateau, the Oki-Daito Rise (which is not to be confused with the adjacent Oki-Daito Ridge), and that has no counterpart beyond Apolaki. It could not have, because, as Figure 2 shows, rather than there being seafloor on which it could rest, there is the island of Luzon, the most northerly major island in the Philippine archipelago. The sea-floor has disappeared down the Philippine Trench, and if there was a counterpart to the Oki Daito Rise, then it also must have gone down the subduction zone.

The circumstantial evidence for this having happened is quite convincing, but is there any direct evidence? There is indeed, and it has been provided by Jonny Wu and his colleagues in a paper entitled “Philippine Sea and East Asian plate tectonics since 52Ma constrained by new subducted slab reconstruction methods”. Their Figure 14 shows the subducted slab of West Philippine Basin crust as a tomographic presence beneath Mindanao and the islands to the north as far as 12°N, but beyond this point the clear slab image is replaced by a ghostly presence of a ‘subducted plateau’ characterised by a low seismic velocity. Evidence enough that an Oki-Daito does exist, and that it deserves a Filipino name. Where better to look for one than in the Tagalog pantheon, in which the sun-god Apolaki was a relatively late arrival. He has a mother (as many sun-gods do not), her name is Anagolay, and she is, above all, the goddess of lost things.

How could we possibly not attach her name to that lost plateau? 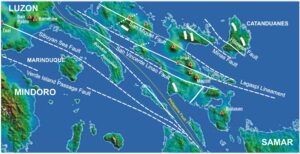 Figure 3.The Luzon Syntaxis. Short, thick white lines are extensional faults. The thinner, longer lines are left-lateral strike-slip faults taken from a variety of sources and are shown as dashed lines in water-covered areas where direct evidence is lacking. The Philippine Fault is often shown on regional maps as following the dotted yellow line, but there is no real evidence for this level of continuity. It is more probable that it has been simply terminated and offset by the later syntaxis faults. Red triangles indicate volcanoes.

As befits a personage of such distinction, Anagolay has left her mark on the Philippines. In just theplace where the Philippine Trench ceases to be traceable and low velocity dominates the seismic image, the eastern margin of the archipelago is offset to the west in the chaotic  complexity of eastern Luzon, which so nearly, in so many places, fails to be part of a single island. This is one of the most intensely volcanic and pervasively faulted regions of the entire Philippines and, because the fault zones along which India has driven north past Southeast Asia and the Afghan block are known, respectively, as the eastern and western syntaxes, we now refer to eastern Luzon by a new name. We call it the Luzon Syntaxis.

And it is all Anagolay’s fault.